First pictures from Orleans & Carrollton, where at least a dozen are critical after a vehicle slammed into the Endymion crowd. pic.twitter.com/MMpiu4GyoT

A truck driven by a suspected drunk driver crashed into a crowd of parade-goers in New Orleans, sending 28 people to the hospital.

However, the Advocate later reported that officials say the injuries are not life-threatening, something the mayor confirmed on Twitter. CNN reported that five of those transported were seriously injured; earlier reports had said 12 people were in critical condition.

One person was in custody, and the suspected cause is drunk driving, although the incident – which occurred the evening of February 25 – remains fluid and under investigation. The number of injured grew throughhout the night, although initial reports that 12 people were in critical condition were not accurate.

NOPD arrest made at Carrollton and Orleans. Several injured after car crashes into people by parade. @WWLTV pic.twitter.com/mBbg6SmLIh

Some of the raw videos from the scene were disturbing.

A police officer was reportedly among those injured.

Picture appears to show a Police Officer may be one of the victims at the #neworleans #MardiGras #breaking #news pic.twitter.com/PByrLZ2Ggi

According to the New Orleans Advocate newspaper, the mass tragedy occurred at Orleans and Carrollton during the Endymion parade. You can watch a live stream from television station WVUE-TV above. A WDSU-TV reporter reported that it’s believed a drunk driver was at fault.

One tweet from a videographer indicated the crash might have been an accident: “@NOPDNews @WWLTV Black truck hit a white car spun out of control rammed into a bus or a trailer.”

The New Orleans Police Department confirmed on Twitter that “a vehicle ran into a crowd of people at the Orleans and Carrollton.”

NOPD is investigating a crash where a vehicle ran into a crowd of people at the Orleans and Carrollton.  #NOPDAlert pic.twitter.com/Ll8YeVI7ru

The Endymion parade is part of the lead up to New Orleans’ famed Mardi Gras celebrations. According to NOLA Curbed, the Endymion parade is one of a series of parades leading into Mardi Gras festivities. The site wrote, “Throughout the next couple of days, some of the largest krewes—a.k.a super krewes—are expected to roll through the city, including Bacchus, Endymion and Orpheus.”

Here are some of the photos and videos from the scene:

Breaking: #Neworleans police investigating a crash where a vehicle ran into a crowd of people. A dozen are in critical condition. pic.twitter.com/1J2tKu1XvI

New photos from scene of Endymion crash at Carrollton and Orleans in New Orleans. https://t.co/zOayvKIlfy pic.twitter.com/zO8NwZmG8R

The incident scene is clear and our Sanitation Crews have begun cleaning the parade route. pic.twitter.com/q2SRbIDVYv

Thanks to our first responders for the care you provided to the victims and others watching the parade. pic.twitter.com/b926KBX7iv

Our thoughts and prayers are with the victims injured by a drunk driver on the parade route today. pic.twitter.com/EvKEpGZ7aL

The Advocate reported that an eyewitness at the scene “said a silver truck whisked by her just feet away as she was walking through the neutral ground at intersection.” The newspaper quoted the woman as saying, “I actually literally felt it. I felt a rush it was so fast,” adding that the truck hit a “white Chevrolet Malibu, sending it into a utility pole.” Another eyewitness told the newspaper that the driver seemed “just kind of out of it.”

Although terrorists influenced by ISIS have used vehicles to ram into crowds in Nice, France and Berlin, Germany in recent terrorist attacks, reports from New Orleans-based reporters thus far don’t appear to indicate terrorism as a motive, as drunk driving is being reported as the possible cause under investigation. The mayor referred to the suspect as a “drunk driver” on Twitter.

Read more about the tragedy in New Orleans in Spanish at AhoraMismo.com: 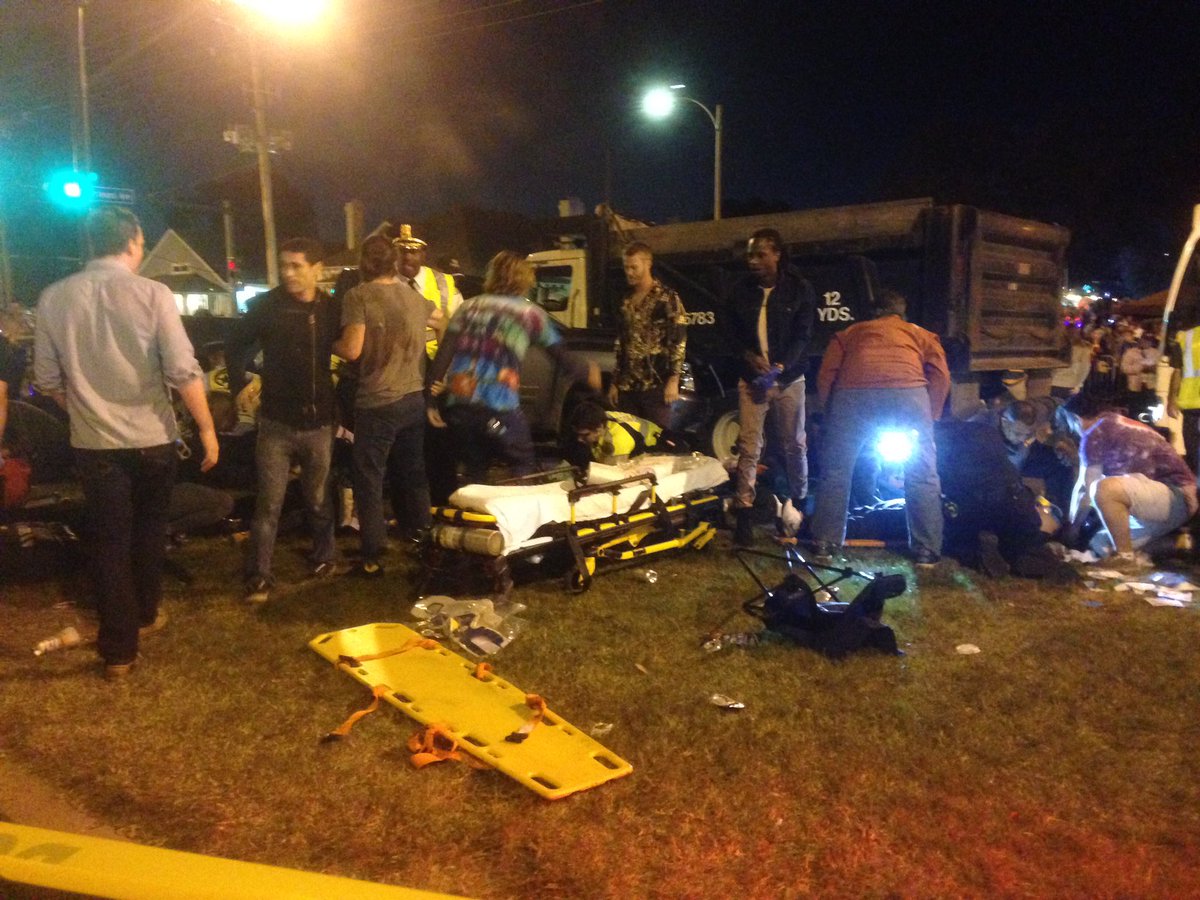 Read More
Breaking News, New Orleans
See Endymion parade photos and videos from the scene where a truck crashed into a crowd in New Orleans.