President Donald Trump is being mocked on Twitter for praising Frederick Douglass in a way that made it sound like he thinks the famed abolitionist and American icon is alive.

You can watch Trump’s remarks above. He made the oddly phrased remarks flanked by former Apprentice contestant Omarosa Manigault and HUD Secretary nominee Ben Carson.

In case you don’t already know, Douglass died in 1895, and he’s not an obscure historical figure. He’s a revered one. He is one of the country’s most revered anti-slavery figures and a towering intellectual whose eloquent autobiography is a seminal work on the horrors of slavery. Many people believe he’s one of the most inspirational Americans of all time. In fairness to Trump, he thinks Douglass “has done” an amazing job!

Frederick Douglass is an example of somebody who has done an amazing job and is being recognized more and more, I notice. Harriet Tubman, Rosa Parks and millions more black Americans who made America what it is today. A big impact.

The jokes flew, especially when Press Secretary Sean Spicer then spoke about Douglass in a way that made people think he doesn’t know who Douglass is, either.

Some people wished Frederick Douglass was actually still alive. The country needs him, they said.

Trump thinks Frederick Douglass is still alive. Great, can Douglass help us overthrow this idiot from the White House? #blackhistorymonth

Others had big ideas.

@CornelWest, what do you say? Introduce yourself to Trump as Frederick Douglass and let's see what happens.

Trump wishes he had named Frederick Douglass as HUD Secretary instead of Ben Carson.

The comment came in the midst of a series of other remarks praising African-American leaders. The Washington Post also mocked Trump, though, for seeming to say that the term “African-American” applies to people who also live outside the United States. Trump said:

During this month, we honor the tremendous history of the African Americans throughout our country — throughout the world, if you really think about it, right?

According to Biography.com, Douglass was a “famed 19th-century author and orator” and “an eminent human rights leader in the anti-slavery movement and the first African-American citizen to hold a high U.S. government rank.” Born into slavery, he was an eloquent author, whose most famous work was the autobiography, Narrative of the Life of Frederick Douglass, an American Slave.

Trump made his comments about Douglass in remarks honoring Black History Month, in which he segued from fake news to himself to Carson to Civil Rights icons Rosa Parks and Martin Luther King Jr. to Omarosa.

This is a full transcript of President Trump's speech to his Black History Month event. pic.twitter.com/uJ9iXvUOGr

According to The Washington Post, Trump was speaking to a “small group of African American aides and supporters to kick off Black History Month.” Some thought people should chill out and give Trump a break; after all, he was praising Douglass.

However, Trump’s comments had Twitter thinking that Trump doesn’t realize Douglass is dead or why he’s so celebrated. You can read the full transcript of Trump’s remarks here. The jokes quickly flew.

Some people thought that follow up remarks by Spicer made it sound like Spicer is clueless about Douglass’ much vaunted contributions to American history.

However, it’s possible, of course, that both men just worded things poorly.

Man. Someone asked Sean Spicer what Trump meant on Frederick Douglass. The… https://t.co/kTmJICmIji by #scienceofeds via @c0nvey

Here are some of the jokes and comments reacting to Trump’s remark on Frederick Douglass:

I am 97% sure that Trump thinks Frederick Douglass is heir to the Fredericks of Hollywood dynasty. #trumpblackhistory

About damn time Frederick Douglass is trending on Twitter!

With this quote in mind, Frederick Douglass surely would have shunned Betsy DeVos…and the broken trump. #BlackHistoryMonth #PressOn pic.twitter.com/ZVv9oEILFD

Guys did Trump not attend 3rd grade? How does someone not know who Frederick Douglass is?

wow can't believe trump doesn't know who Frederick Douglass is, I did a report on him in the 5th grade FFS!!!

Trump thought he saw Frederick Douglass marching the other day.

I need Trump to go on record and state that he knew before today that Frederick Douglass is dead.

Trump is going to have a state dinner for Frederick Douglass and sit next to him and talk about big and huge stuff. 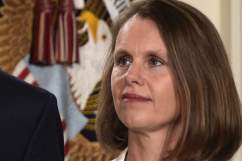