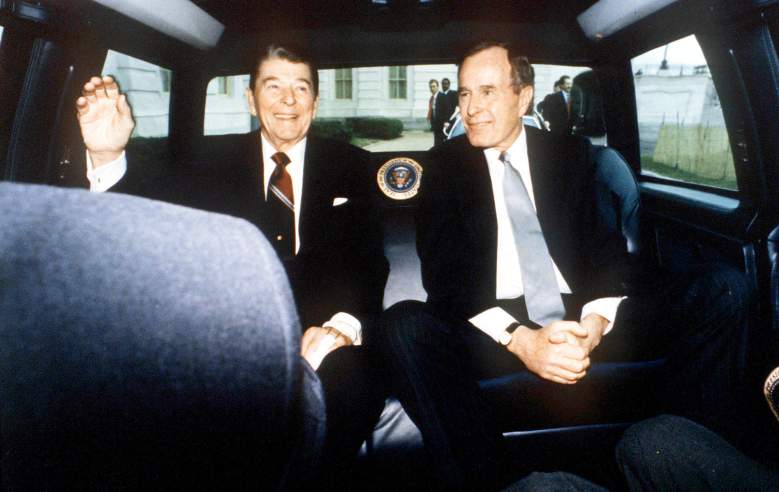 Bush and Reagan did not always have the best relationship. The two were rivals during the 1980 Republican primary, but Reagan chose Bush to be his vice president at the Republican National Convention that year. Reagan’s wife, the late Nancy Reagan, also reportedly had a frosty relationship with Bush’s wife, Barbara Bush.

Here’s a look at the two important Republican figures in American history.

1. Reagan Thought Bush Lacked ‘Spunk’ & ‘Melts Under Pressure’ Before Picking Him to be Vice President

The 1980 Republican primary campaign was bitter. Bush started off strong by winning the Iowa caucuses, but Reagan won the New Hampshire primary. During the campaign, Bush came up with the term “voodoo economics” to describe Reagan’s economic policies and continued to use the phrase during their debates.

However, after winning New Hampshire, Reagan was the one with momentum and eventually won the nomination and beat Jimmy Carter in the general election. During the Republican National Convention, Reagan picked Bush, despite having some reservations.

Reagan was so skeptical of Bush that there was talk of him picking former President (and former Reagan rival) Gerald R. Ford to be Vice President, Cannon wrote. That’s why Reagan waited so long to announce Bush as his running mate.

2. Bush’s Relationship With Reagan Got Better After Reagan Survived an Assassination Attempt

On March 30, 1981, Reagan was shot in Washington D.C. by John Hinckley Jr. and seriously wounded. Bush was in Texas at the time, and flew back to Washington after he heard the news, according to Bush’s Senate bio.

When Bush arrived at Andrews Air Force Base, his aides suggested he be flown by helicopter directly to the White House, but Bush declined. “Only the President lands on the south lawn,” Bush told his aides. Instead, Bush was flown to the vice president’s residence and then driven to the White House.

The decision helped Bush earn the respect from Reagan and their relationship began to warm up. Bush said that they started having weekly lunches on Thursdays to discuss government issues.

For the most part, Bush spent Reagan’s first term in the background, only chairing task forces on federal deregulation and international drug smuggling as his major projects.

3. Bush Claimed He Was ‘Deliberately Excluded’ From Reagan’s Iran-Contra Affair

Reagan’s second term was marred by the Iran-Contra Affair. The scandal involved senior administration officials selling arms to Iran, even though the country was under an arms embargo, in the hopes that they could have U.S. hostages released. The officials then planned to use the profits to fund anti-communists in Nicaragua. Despite investigations at the time, it’s still not known exactly how involved Reagan was in the affair. However, he did take responsibility in his March 4, 1987 speech.

“Let me say I take full responsibility for my own actions and for those of my administration. As angry as I may be about activities undertaken without my knowledge, I am still accountable for those activities,” Reagan said in the speech. “As disappointed as I may be in some who served me, I’m still the one who must answer to the American people for this behavior.”

As for Bush, he claimed in his 1987 memoir Looking Forward that he was “deliberately excluded” from key White House meetings about the Iran-Contra deals, The Los Angeles Times reported at the time.

Bush devoted eight pages of that book to the affair and wrote that he told other officials that he had “misgivings” about the plan. The LA Times notes that Bush wrote that he “later questioned whether I’d done everything possible to make my doubts known.”

The cool relationship between Reagan and Bush reportedly extended to their wives. Barbara Bush and Nancy Reagan’s supposed animosity towards each other is mentioned in a March 1992 Newsweek piece. The magazine reported that Barbara Bush “relished” gossip about their relationship and that Nancy Reagan didn’t like her. “The feeling was mutual, Barbara Bush assured friends,” the report reads.

The Daily Mail reports that Jon Meacham wrote in his book Destiny and Power: The American Odyssey of George Herbert Walker Bush that Nancy Reagan had a “restrained but real hostility” towards the Bushes because she felt the Bushes because there could “only be one leading couple” in Washington during the Reagan presidency.

Just before her 88th birthday in 2009, Nancy Reagan spoke with Vanity Fair and, even then, wouldn’t say much about Barbara Bush. “I never got to know her very well. Our lives just took different tracks,” she said.

5. Bush Said He Learned More From Reagan ‘Than From Anyone I Encountered in All My Years of Public Live’ During His Eulogy for Reagan

Both President Bushes spoke at Ronald Reagan’s state funeral service at the Washington National Cathedral on June 11, which President George W. Bush declared a national day of mourning. In his eulogy, Bush remembered Reagan for the reasons Reagan became a beloved figure.

“Ronald Reagan was beloved because of what he believed,” Bush told the congregation. “He believed in America so he made it his shining city on a hill. He believed in freedom so he acted on behalf of its values and ideals. He believed in tomorrow so the great communicator became the great liberator.”

Bush also spoke about what he learned from Reagan. “As his vice president for eight years, I learned more from Ronald Reagan than from anyone I encountered in all my years of public life. I learned kindness; we all did. I also learned courage; the nation did,” Bush said.

The Rev. Billy Graham could not be at Reagan’s service, so Bush asked Graham for a Bible passage that would fit the occasion. “He suggested this from Psalm 37: ‘The Lord delights in the way of the man whose steps he has made firm. Though he stumble, he will not fall for the Lord upholds him with his hand,'” Bush said. “And then this, too, from 37: ‘There is a future for the man of peace.'”

Loading more stories
wpDiscuz
0
0
Would love your thoughts, please comment.x
()
x
| Reply
George H.W. Bush was Ronald Reagan's vice president during both terms before becoming president himself. He was also Reagan's rival in 1980.