UPDATE: Punxsutawney Phil, the groundhog, did see his shadow, predicting six more weeks of winter this morning, according to Newsday. 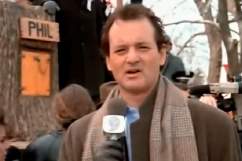 It’s Groundhog Day in 2017 and the festivities start very in the morning. Will Punxsutawney Phil see his shadow this year? Get all the details on what time to watch the announcement, predictions and more below.

ANNOUNCEMENT TIME: According to Visit PA, Punxsutawney Phil will show himself at sunrise to reveal whether or not we will have six more weeks of winter. The official coverage of this begins at 5 a.m. ET

LIVE STREAM: Click here for the official live stream of Punxatawney Phil on Groundhog Day. It begins at 5 a.m. ET.

WHAT THE GROUNDHOG’S PREDICTION MEANS: If Phil comes out and “sees his shadow,” it’s supposed to mean that there are six more weeks of winter. If he does not see his shadow, it means Spring is just around the corner. According to NJ.com, the Inner Circle, aka the guys you see in top hats with Phil, are made aware of Phil’s prediction first, since they speak “Groundhogese”, and then the President of the Inner Circle announces it to the public. Most often, Phil does see his shadow.

WHERE IS PHIL WHEN IT’S NOT GROUNDHOG DAY: Phil reportedly lives near the town library with his wife Phyllis. They reside in a burrow at Barclay Square.

Loading more stories
wpDiscuz
0
0
Would love your thoughts, please comment.x
()
x
| Reply
Get the details on what time and channel to watch Punxsutawney Phil give his annual announcement on Groundhog Day 2017.