February 2 is Groundhog Day 2017. Learn about the history and origins of the holiday here and what Punxsutawney Phil has prognosticated: an early spring or more winter?

Groundhog Day was first officially established in 1887 by the Punxsutawney Groundhog Club. The club has monitored the event every year since. “Punxsutawney Phil” has been the name of the resident groundhog used for weather prognostication for the club since its inception, and the club jokingly claims that there has only ever been one Punxsutawney Phil.

According to the Groundhog Day legend, if it’s cloudy when Punxsutawney Phil emerges from his burrow, then spring will come early; if it’s sunny, the groundhog will get scared by its shadow and run back into its burrow, bringing on six more weeks of winter.

1. It Comes From a European Christian Holiday With Pagan Origins Called ‘Candlemas’

Prince Charles, Prince of Wales and Camilla, Duchess of Cornwall, attend a Candlemas service at Saint Michael’s Church, Camden on February 2, 2012 in north London, England. The Prince of Wales and Duchess of Cornwall attended the service as part of a series of visits to churches to experience their work in serving the community. (Dominic Lipinski – WPA Pool/Getty Images)

Before its association with Candlemas for early Christians, Groundhog Day began as a pagan holiday. Called “Imbolc”, it was the seasonal turning point in the Celtic calendar. Imbolc was celebrated on February 1, and the main way to celebrate Imbolc was with weather prognostication. According to the Merriam-Webster Dictionary, prognostication is “the action of foretelling or prophesying future events.”

Ancient Celts weather prognosticated with badgers or bears. Groundhogs, also known as woodchucks or marmots, are native only to North America, and thus were not used by pagan Europeans.

Imbolc eventually came to be known as Saint Brigid’s Day when Northern European peoples were Christianized. Saint Brigid’s Day also happened to be around the same day on the Christian calendar as the Presentation of Jesus at the Temple, known as “Candlemas.” Candlemas is, according to tradition, the day Mary and Joseph took the baby Jesus to the Temple in Jerusalem forty days after his birth.

The movie will soon come to the Broadway stage in spring 2017. The musical has music by comedian Tim Minchin and opens in late March. 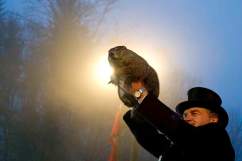 Loading more stories
wpDiscuz
0
0
Would love your thoughts, please comment.x
()
x
| Reply
February 2 is Groundhog Day 2017. Learn about the history and origins of the holiday here and what Punxsutawney Phil has prognosticated: an early spring or more winter?