The House Oversight Committee has sent a bipartisan letter asking for an ethics investigation into Kellyanne Conway’s comments that urged people to “go buy Ivanka’s stuff.”

She was referring to the presidential daughter’s clothing line.

Conway said on Fox News, “Go buy Ivanka’s stuff is what I would tell you…It’s a wonderful line. I own some of it. I fully – I’m going to give a free commercial here. Go buy it today, everybody. You can find it online.”

The letter says “Conway’s statements appear to violate federal ethics regulations, which prohibit actions that imply a government t endorsement of the ‘personal activities’ of another person.”

You can read the letter in full above.

Conway made the comments in the television interview the day after Trump tweeted an attack against Nordstrom’s department store for discontinuing his daughter’s line. The company says it was because of poor sales; Trump says it was a political move. According to CNN, the White House said Conway was “counseled” after controversy erupted over the comments, which led “ethics lawyers, lawmakers and government watchdog organizations” to call for an investigation into whether Conway violated government ethics laws.

Kellyanne Conway appearing with Donald Trump shortly after the 2016 election was called in Trump’s favor. (Getty)

The letter from Jason Chaffetz, the Committee’s Republican chairman, and Elijah Cummings, a Democrat, takes issue with the comments that Conway, Trump’s senior adviser, made while standing in front of the White House. Chaffetz labeled Conway’s comments “wrong, wrong, wrong” in a tweet.

What she did was wrong, wrong, wrong. Here is our bi-partisan letter to the White House and OGE. #Donteverdothis https://t.co/zqeYhcttMB

Earlier, Cummings had written Chaffetz “requesting that the Committee refer for potential disciplinary action,” Conway’s statements on television, according to a release from Cummings’ office. “This appears to be a textbook violation of government ethics laws and regulations enacted to prevent the abuse of an employee’s government position,” Cummings wrote.

The joint Chaffetz/Cummings letter is addressed to Walter M. Shaub, Jr., the director of the U.S. Office of Governmental Ethics in Washington D.C.

Shaub was critical of Trump previously for not selling his business interests.

Read more about the federal ethics code that Conway may have violated here: 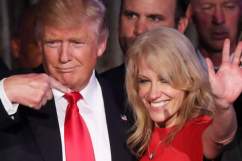