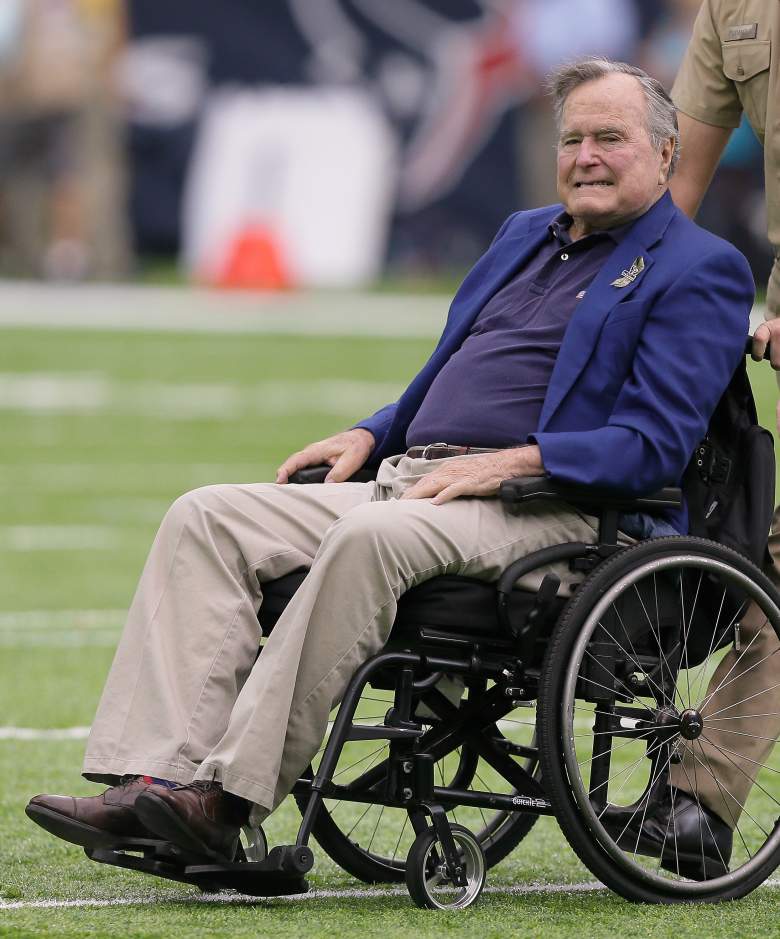 President George H.W. Bush flipped the coin for the kick off between the Detroit Lions and Houston Texans at NRG Stadium on October 30, 2016 in Houston, Texas. (Getty)

Former President George H.W. Bush is leading the Super Bowl coin toss today with his wife, former First Lady Barbara Bush. Just how old is George Bush now? And how is his health, since he was so recently hospitalized? He’s doing better, but he still uses a wheelchair because of a chronic disease similar to Parkinson’s.

George H.W. Bush is 92 years old; he was born on June 12, 1924. He’s the oldest living president, just a few months older than Jimmy Carter. His wife, Barbara, is 91. He has historically been in good health for his age, In 2014, he went skydiving for his 90th birthday. But recently, he suffered a health scare. He and Barbara were hospitalized at the same time. George Bush was hospitalized for pneumonia. He was admitted on January 14 for shortness of breath and had a procedure to address breathing issues associated with the pneumonia.

President and Mrs @GeorgeHWBush thank their fellow Americans and friends from around the world for their prayers and good wishes. pic.twitter.com/PhpXXGKl6p

He made a quick recovery and now he and his wife are overseeing the coin toss.

Bush has been very excited about the coin toss. He posted a GIF on Twitter about his preparations on Feb. 1:

Getting fired up for Sunday and #SuperBowl. pic.twitter.com/zlXmsZJrTM

Loading more stories
wpDiscuz
1
0
Would love your thoughts, please comment.x
()
x
| Reply
How old is George H.W. Bush? How is his health? Find out how he's doing and how he could lead the Super Bowl coin toss so soon after being hospitalized.