A mother with a criminal record in Mesa, Arizona suddenly deported to Mexico.

An ICE officer injured during an arrest in Austin, Texas, and a landscaper detained.

Protests at a freeway in California.

What’s going on? Are ICE agents conducting raids throughout the country because of Donald Trump’s election and executive orders? It’s no secret that Trump made cracking down on illegal immigration the centerpiece of his campaign, and people who are undocumented have been fearing roundups ever since. He’s promised to zero in on the subset of undocumented immigrants who were convicted of serious crimes, after initially speaking of mass deportations during the campaign.

There’s evidence raids and/or detentions are occurring, as reports pop up throughout the country in at least eight states (California, Georgia, Texas, Arizona, Kansas, New York, Virginia, South and North Carolina.) ICE insists the raids are targeted and nothing new and denies social media reports that checkpoints were set up in communities. In California, ICE now says it rounded up 160 people, targeting those with felony records or who are fugitives and called reports of widespread raids “irresponsible” and false, The Orange County Register reported. The newspaper labeled the ICE actions in California a “surge.” In George and the Carolinas, ICE picked up 200 people, reported NBC News.

Some of the scenes are growing intense, with protests in California, New York, Texas, and Arizona. In at least one case, the Mesa deportation, the person detained had a deportation order that dated to the President Obama administration. ICE told NBC News that the California raids were in the works before Trump’s election.

However, The Washington Post reported that the raids, “which appeared to target scores of people, including those without criminal records, mark the first largescale episode of immigration enforcement inside the United States since President Trump’s Jan. 26 order to crack down on the estimated 11 million immigrants living here illegally.”

Not everyone is opposed, especially when news broke that at least some people detained had criminal records.

Others are deeply concerned.

Why is there no news coverage regarding the #ICERaids ??

ICE told ABC 7 Los Angeles that raids were “targeted” arrests and “ongoing,” not the result of some sudden Trump step up in activity. However, it’s been impossible so far to get a clear answer from ICE about how many people were rounded up nationwide.

Heavy reached out for comment, asking ICE why the raids were occurring, where, if they’ve increased, and how many were detained and received this statement:

U.S. Immigration and Customs Enforcement (ICE) deportation officers conduct enforcement actions every day around the country as part of the agency’s ongoing efforts to uphold public safety and border security. Our operations are targeted and lead driven. ICE’s routine immigration enforcement actions are ongoing and we make arrests every day. Our officers prioritize cases based on a variety of factors, including the person’s criminal and immigration history, as well as the viability of the leads we have on the individual’s possible whereabouts. ICE conducts targeted immigration enforcement in compliance with federal law and agency policy. ICE does not conduct sweeps or raids that target aliens indiscriminately.

Think Progress accused ICE of detaining “134 immigrants at their workplaces and homes in a series of raids.” The site reported that immigration advocates claim “that some people were picked up as ‘collateral arrest’ after they opened their doors to agents who were not there to specifically arrest them. ICE agents allegedly requested to see identification from everyone and took in family members who were undocumented.”

This morning: #ICE at the taco stand on 969 near Austins Colony, hanging around to catch people presumably on their way to work. #ICERaids pic.twitter.com/TnoA5WELgC

In a press release announcing one deportation, ICE revealed that, in fiscal year 2016, the agency removed 240,255 people nationwide. “Ninety-two percent of individuals removed from the interior of the United States had previously been convicted of a criminal offense,” ICE reported.

ICE will remove illegal aliens convicted of felony offenses as ordered by an immigration judge.

Immigration advocates and some politicians said they are having trouble obtaining a list of who and how many were detained. ICE raids are not uncommon historically. In 2015, under President Barack Obama, over 2,000 undocumented immigrants were detained in a raid targeting those with criminal records. In October 2016, before the election, ICE raids occurred at Mexican restaurants in Buffalo, New York.

Here are where the reports of ICE raids and/or detentions are occurring, as of February 10, 2017 (this post will be updated as more reports come in):

This is where Francisco Alvarado was arrested by #ICE in #Austin. Emergency planning for demonstration underway. Date and time TBA. #ATX pic.twitter.com/skrcMjwIrP

An ICE officer in Austin, Texas was taken to the hospital with non life threatening injuries after a scuffle erupted when the officer tried to make an immigration arrest, according to KVUE-TV.

According to the Austin American Statesman, the ICE officer had pulled over a car in a traffic stop and tried to take a person in custody when family members of the person got “out of hand.” It was not clear why the man was being arrested by ICE, the newspaper reported.

Fear spread quickly on social media as there were unconfirmed reports of raids at taco stands and checkpoints. People posted information on Twitter alerting undocumented immigrants to ICE raids, and other people said those people should be reported to ICE.

Attention: All tweets spreading information to help illegals will be reported to @FBI. #ICERaids https://t.co/4mM962qRGV pic.twitter.com/1clljpneDx

A report in the Texas Observer said the raids were targeted and resulted in five arrests. Immigration advocates said they’d never heard of that many arrests in one day.

One of those rounded up was Francisco Alvarado, a landscaper, whose wife, Reyna, told the Observer he was pulled over and taken into custody. A weeping Reyna told the newspaper the couple has a daughter and added that they “fled Honduras about 10 years ago to escape gangs who had killed some of their family members.”

Protests erupted outside the federal building over Alvarado’s arrest.

#BREAKING– Crowd of about 40-50 protestors blocking #ICE deportation vans in PHX. #GuadalupeGarcia believed to be inside. family in tears. pic.twitter.com/nD3BoVNfS7

In Mesa, Arisona, a mother named Guadalupe Garcia de Rayos, who was convicted of a felony for identity theft eight years ago, was reportedly the first in Arizona to be deported to Mexico as part of Trump’s immigration executive orders, which called for undocumented residents convicted of crimes to be deported.

She wasn’t detained as part of a raid, though; she had reported to her detention officer as required, and then was not released.

An ICE spokesperson said, “Ms. Garcia De Rayos is currently being detained by U.S. Immigration and Customs Enforcement (ICE) based on a removal order issued by the Department of Justice’s Executive Office for Immigration Review which became final in May 2013. Relevant databases indicate Ms. Garcia De Rayos has a prior felony conviction dating from March 2009 for criminal impersonation.”

Emotional family members and friends gathered around an ICE van as it tried to take de Rayos away and a protest erupted. DeRayos is married with two teenage children and has been in America since she was 14.

One man who was deported in Phoenix on February 10, Sebastian Medina-Cuabras, was “a Mexican man wanted for kidnapping in the State of Sinaloa, Mexico,” ICE announced in a news release.

According to the arrest warrant issued by Mexican authorities, Medina-Cuabras “is wanted for a kidnapping where he and three other individuals organized, prepared and executed a ransom plot in August 1999. Details of the Mexican arrest warrant indicate that Medina-Cuabras and other assailants abducted a man and took him to a home where he was kept blindfolded and his feet and hands bound.”

ICE took Medina-Cuabras in custody after he completed a 17-year prison sentence in Arizona for shooting a 7-year-old boy in another vehicle in the leg in a road-rage incident, ICE said.

Read more about De Rayos in Spanish at AhoraMismo.com: 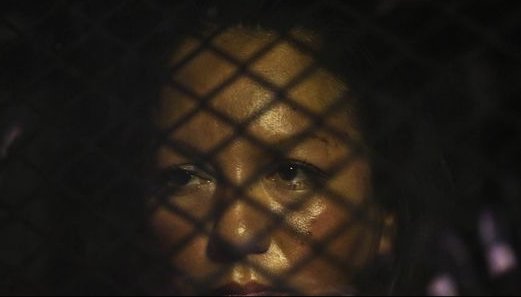 People are marching outside of a van ramp where they expect one of the men detained by ICE will be taken away. pic.twitter.com/Ub9FxevrZs

In California, a state Senate leader issued a statement saying there were reports that ICE raids were occurring throughout Southern California. The senator is requesting from ICE the number of people detained. ICE later confirmed that 160 were detained, telling NBC News, that all but 10 of those had criminal histories and “many of the arrestees had prior felony convictions for serious or violent offenses.” (ICE conducted similar raids in California in 2016 and 2015).

The mayor weighed in:

There were reports that as many as 100 people were detained in California on February 9/10.

URGENT: ICE conducted multiple raids of homes across the city.
There's a call to action 5pm TODAY at the Alameda Detention Center in #DTLA

A protest erupted at a freeway.

The Charlotte Observer says ICE is denying reports of raids in North Carolina.

“U.S. Immigration and Customs Enforcement is again denying social media reports that it has ramped up operations in east Charlotte, including suggestions it arrested dozens of undocumented Charlotte immigrants in the past week,” the newspaper reported on February 9.

The newspaper said social media reports had spread claims of checkpoints, but ICE officials said they only conduct “targeted” raids, like they always have done. They did not give the newspaper the number of those detained in the last few days, though.

ICE also announced it had deported a Dominican national who was living in New York.

Martires Molvan-Figeureo, 54, is wanted on murder charges, according to ICE. He “was escorted by ERO officers via an ICE Air Ops charter flight to Louisiana, where he then boarded a flight to the Dominican Republic, where he was turned over to local authorities,” an ICE press release said. “He entered the United States legally, but failed to depart the U.S. as required.”

ICE said that Molvan-Figeureo, in 2012, while an active member of the Dominican National Police, “shot and killed a man who was allegedly resisting arrest.”

Protests over the ICE raids and deportations also occurred in New York.

ICE confirmed that “homes and workplaces” were targeted in Atlanta, Georgia, according to The Washington Post.

This article will be updated as more reports come in.