The federal judge who temporarily stopped Donald Trump’s immigration ban executive order once caused controversy by emotionally saying “black lives matter” in a hearing in which he sided against Seattle’s police union.

James Robart, who was nominated to the federal bench by George W. Bush in 2004, issued the temporary restraining order on February 3, forbidding federal employees from implementing Trump’s seven-country immigration ban.

In the ruling, which you can read in full here, Robart said the plaintiffs – the States of Washington and Minnesota – were likely to succeed on the merits of their claims and would suffer irreparable harm if the immigration ban wasn’t stopped immediately. Robart will rule on whether to grant a permanent ban later; the White House has declared the ruling “outrageous” and vowed to immediately appeal.

It’s not the first time the judge was in the news.

According to the Seattle Times, Robart declared “black lives matter” in a court hearing last August in which he decided against a Seattle police union. You can watch the video above. The judge shook his head and sighed emotionally as he made the comment. He also accused the Seattle police union of trying to hold the community “hostage” by tying compensation to police services guaranteed to people by the U.S. Constitution.

The Seattle newspaper reported that Robart was presiding over “a 2012 consent decree requiring the city to adopt reforms to address Department of Justice allegations of excessive force and biased policing.” He “called for major changes that would directly affect the union’s membership: streamlined appeals of officer discipline and internal investigations conducted by civilians rather than sworn officers,” the newspaper reported.

At the end of the hearing, according to the Seattle Times, Judge Robart then became “deeply personal,” noting “a statistic that showed, nationally, 41 percent of the shootings by police were of blacks, when they represented 20 percent of the population” and referencing high-profile police shootings.

Blue Lives Matter, a pro police blog, was one of the sites criticizing Robart at the time. The site wrote, “He proposed changes will have a major effect on all union members, including discipline being investigated and determined by non-law enforcement investigators. The changes make it faster and easier to discipline an officer if the public believes that the officer was wrong, whether or not that was actually the case.”

According to his judicial bio, Robart was a lawyer from 1973 through 1996 with Lane Powell Moss & Miller before being named to the federal bench by Bush (and confirmed unanimously by the U.S. Senate). He was co-managing partner from 1997-2002 at Lane Powell Spears Lubersky, and managing partner there from 2003-2004.

The judge has a law degree from Georgetown University Law Center (1973), where he was Administrative Editor of the Georgetown Law Journal. He has a bachelor’s degree from Whitman College.

In another police-related case, according to Above the Law, Robart doubled the city payout to people whose dog was tasered by the police, accusing the city lawyers of “terrible writing” and denying the city lawyer’s claim the dog’s owners were “persecuted.” He wrote, “The treatment of the Jews by the Pharaohs in ancient Egypt, that was a persecution. What Nazi Germany did in the Third Reich, that is a persecution.” He also brought up “the expulsion of the Acadian people from Nova Scotia by the British; the treatment of the Aboriginal people in Australia; ethnic cleansing,” the site reported.

The Trumps headed for Mar-a-Lago on February 3 as the judge’s decision came out. Learn more about their Florida vacation here: 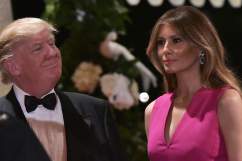