In addition to being Donald Trump’s adviser and controversial surrogate on TV news shows, Kellyanne Conway is a mother of four.

Kellyanne and her lawyer husband, George T. Conway III, have four small children all under the age of 12. A pollster, Conway was the first woman to manage a GOP presidential campaign.

Since joining the Trump team – first as campaign manager, then as White House adviser – Conway has endured highs and lows. She helped orchestrate the president’s surprise victory in the presidential election when polls and many pundits were writing him off.

However, since Trump assumed the presidency, Kellanne has found herself in hot water over everything from touting Ivanka Trump’s clothing line on TV to coming up with the much mocked term “alternative facts.” She’s also been the subject of some brutal Saturday Night Live skits.

But there’s another side to Conway: Mother. She once wrote on Twitter: “Had 4 children over age 35. Stage, not age, defines us.”

1. Conway Reportedly Ran Into Issues Finding a Washington D.C. School For Her Children

Conway told the New York Post in late December 2016, “I would not characterize myself as ‘worried’ so much as amused by the silence and sighs on the other end of the phone when friends and allies have made preliminary inquiries on our behalf.”

Conway did tell The Washington Post that one friend who called a school for her without being asked “was disappointed if not shocked to hear the silence and sighs on the other end (hence my comment) followed by talk of a capacity issue for the remainder of the year.”

Kellyanne Conway Net Worth: 5 Fast Facts You Need to Know

2. Kellyanne Is the Mother to Twins & Her Mornings Have Been Described as ‘Organized Chaos’

Among her four children: A set of twins named George and Claudia.

In late December, reported Page Six, the twins performed a concert at Elisabeth Morrow School in Englewood, NJ, which they currently attend along with the goddaughter of singer Alicia Keys.

According to the Washington Post, Kellanne’s twins are 12-years-old and are in the sixth grade at the New Jersey private school.

CNN described mornings in the Conway home as “a scramble to get the kids fed, dressed and out the door on time for school — organized chaos that would look familiar to any parent.” Asked how she balances career and kids, Conway told CNN she once told a client, “It’s like, ‘I just hope you ask all the male consultants. Are you going to give up your weekly golf game and your mistresses?’ Because they seem really, really busy too.'”

Conway’s youngest daughters are named Charlotte and Vanessa, and her mother moved in to help with them during the campaign, reported CNN.

“The youngest are in public schools, which the twins attended for most of their lives, according to The Washington Post.

Kellyanne told the newspaper she had explained to her older children “why Hillary Clinton lied so many times” and “why the media were so unfair to Donald Trump.” She also told The Post she discussed Bill Clinton’s infidelity with her oldest children, telling them “why she (Hillary) made a different choice when faced with a cheating husband than my (Kellyanne’s) mother did.”

4. Conway Brought One of Her Daughters to Work With Her at Trump Tower & Said Her Favorite Role Is ‘Mommy’

In early January, Conway brought one of her daughters to work with her at Trump Tower. The UK Daily Mail called the girl Conway’s “mini me,” although she more closely resembles Conway’s husband. 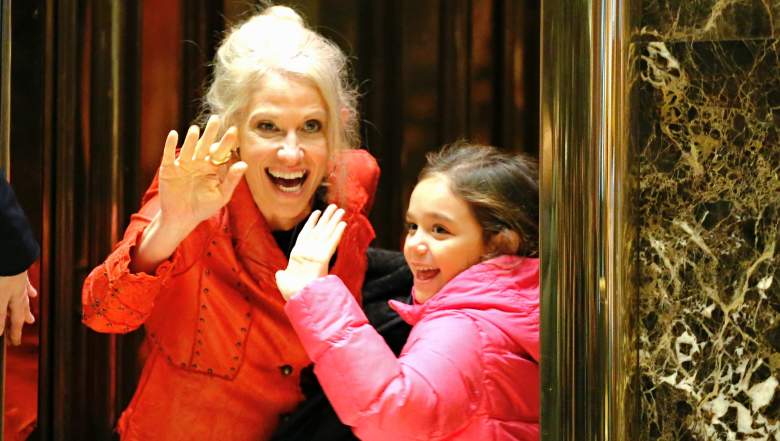 Kellyanne Conway and one of her daughters arrives at Trump Tower for meetings with President-elect Donald Trump on January 2, 2017 in New York. (Getty)

Asked whether she is a feminist, Conway told The Washington Post: “My favorite label is mommy. I feel like the feminist movement has been hijacked by the pro-abortion movement or the anti-male sentiments… I’m not anti-male.”

She also praised her husband’s parenting, telling the Post of his “positive and loving relationship with our three daughters.”

5. Conway Once Made Her Daughter Change Into a Blue Shirt to Honor Betsy Ross

Conway once asked her 11-year-old daughter, Claudia, to change out of a turquoise shirt on Memorial Day and into a blue one because “it wasn’t a shade available to Betsy Ross when she stayed up through the night sewing the damn flag,” according to The Las Vegas Review Journal.

Her husband, George, is a wealthy conservative lawyer who is reportedly under consideration to be the Trump administration’s solicitor general. You can learn more about George Conway here:

Loading more stories
wpDiscuz
2
0
Would love your thoughts, please comment.x
()
x
| Reply
Kellyanne Conway has four children. Learn about Kellyanne's family, husband George, and kids. Their ages are under 12, and she often shares photos on Twitter.