Los Angeles County police and fire officials staged a dramatic rescue on live TV after two cars – one occupied – tumbled into a sinkhole as storm Lucifer exerted its wrath.

You can watch live news reporting as it happened on February 18 above and below. According to ABC 7, one person was injured after falling into the Studio City sinkhole in California.

The TV station said the person in the car, a woman, was rescued and taken to the hospital in unknown condition; a second car fell into the gaping asphalt hole too, but it wasn’t occupied, according to ABC 7.

There was also this frightening moment involving a fire truck:

Here’s another view of the sinkhole rescue:

The California weather situation grew more dramatic on February 17, and 10 trillion gallons of water was expected to fall on the state over the weekend. A car had fallen into the sinkhole on top of another vehicle:

#WATCH: As a car plummets into a #SouthernCalifornia sinkhole on top of another during a major storm:https://t.co/lYnZq0wlLN pic.twitter.com/VFF3j8Xfnk

People watched on live TV as a car tumbled into the hole.

A car & SUV fell into a #sinkhole in #StudioCity…you can see the windshield wipers still going back & forth. 1 driver headed to hospital pic.twitter.com/lZkWIYJTqC

The photos were dramatic too:

Watched a woman get rescued from this sinkhole in Studio City tonite. See the video only on @KTLA at 10pm. pic.twitter.com/CJcOIaZFB7

The Earth is hungry! #SinkHole in Studio City… pic.twitter.com/23QZOKPxMo

There were already reports of four deaths as a result of the storm: A man was electrocuted, and another person was found deceased in a submerged car. Those deaths were unrelated to the sinkhole.

Some photos emerging from the rain storm were whimsical; several captured people attempting to surf on flooded roadways, one in a leopard suit. But the sinkholes were dangerous and frightening.

One horrific shot captured the sight of the car upside down in the sinkhole. ABC 7 reported that water flooded beneath the roadway with the sinkhole.

The massive weather mass was called “Lucifer” or “weather bomb.” It began gathering steam on February 17, flooding streets throughout the state and dumping rain.

How much rain is expected to fall before “Lucifer” wanes? Ten trillion gallons, according to a meteorologist. On Friday, there were also reports of people stuck on freeways, trees falling on roofs, and evacuations. 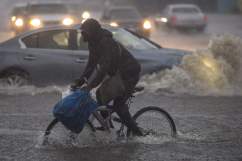