A reveler makes his way through the French Quarter during Mardi Gras day on February 9, 2016 in New Orleans, Louisiana. (Jonathan Bachman/Getty Images)

Today is Mardi Gras, also called Shrove Tuesday or Fat Tuesday, a French Catholic tradition that celebrates debauchery before Lent begins with Ash Wednesday for Christians. The festival date varies from city to city, but most Americans base their celebration of Mardi Gras off of the famous celebration in New Orleans, which this year lands on February 28.

Next year, Mardi Gras will be on February 13 and in 2019 it will land on March 5. Mardi Gras is always celebrated the day before Ash Wednesday. Ash Wednesday is always 46 days before Easter. The date of Easter is always the first Sunday after the full moon following a spring equinox. This year, Easter is on Sunday, April 16.

Mardi Gras is the final day of Carnival, which begins on the Feast of the Epiphany, January 6. January 6 is also known as Kings’ Day or Twelfth Night, and it celebrates the arrival of the three wise men at Jesus’ birthplace.

Learn more about the origins and history of Mardi Gras below!

1. It Has Roots in Paganism

Re-enactors from the Roman Deva Victrix 20th Legion parade through the city of Chester as they celebrate the ancient Roman festival of Saturnalia on December 15, 2016 in Chester, England. (Christopher Furlong/Getty Images)

Christmas was really a spin-off of Saturnalia and other similar pagan holidays, and the date was chosen to help early pagans ease into the religious transition of monotheistic Christianity.

Lupercalia was a very ancient, possibly pre-Roman, pastoral festival observed in pre-Christian Rome on February 15. The holiday would feature the sacrifice of goats and a dog under the supervision of Zeus’ chief priest. The sacrifices were intended to purify the city and promote fertility for the coming lambing season. According to The Lupercalia, the festival later incorporated aspects from another pagan holidaty called Februa, which is where the month of February gets its name.

Like Saturnalia, aspects of Lupercalia were incorporated into early Christian holidays to help in the conversion of Romans.

2. It is Known by Many Names

Because Mardi Gras derived from early Christian culture in the Roman Empire, it developed multiple names after the empire fell in 476 C.E. However, nearly all its names are based on some version of “eating.” History.com writes:

Traditionally, in the days leading up to Lent, merrymakers would binge on all the meat, eggs, milk and cheese that remained in their homes, preparing for several weeks of eating only fish and fasting. In France, the day before Ash Wednesday came to be known as Mardi Gras, or “Fat Tuesday.” The word “carnival,” another common name for the pre-Lenten festivities, may also derive from this vegetarian-unfriendly custom: in Medieval Latin, carnelevarium means to take away or remove meat.

Mardi Gras means “Fat Tuesday” in French. Brazil, however, hosts the world famous Brazilian Carnaval, an annual festival held between the Friday afternoon (51 days before Easter) and Ash Wednesday at noon. Its name is derived from the Latin carnelevarium.

As for Shrove Tuesday, its name comes from the word shrive, meaning “to absolve,” reports Entertaining from Ancient Rome to the Super Bowl: An Encyclopedia. Shrove Tuesday is similar to Mardi Gras and is observed by many Christians, including Anglicans, Lutherans, Methodists and Roman Catholics. However, participants in Shrive Tuesday commonly eat pancakes.

3. It Was Officially Made a Christian Holiday in 1582

English mercenary and adventurer Thomas Stukley (or Stukeley, c1520 – 1578, centre) with Pope Gregory XIII (1502 – 1585, left) and King Philip II of Spain (1527 – 1598), circa 1578. The Pope and the king supported a plan for an armed landing in Ireland, led by Stukley, with the aim of overthrowing the Protestant rule of Elizabeth I of England. (Hulton Archive/Getty Images)

However, despite it being a tradition among Christians for well over a millennium, Mardi Gras was officially recognized by Pope Gregory XIII when he made it a holiday in 1582 in the new Gregorian calendar, which is the calendar still used today.

Being a pious man, Pope Gregory XIII placed Mardi Gras on the day before Ash Wednesday so that all the debauchery would be finished when it came time to fast and pray, reports the Huffington Post.

A group dressed in Mexican or Spanish costumes at the New Orleans Mardi Gras parade in 1955. (Three Lions/Getty Images)

Mardi Gras arrived in the modern U.S. state of Louisiana in 1699 by French explorers Jean-Baptiste Le Moyne, Sieur de Bienville and Pierre Le Moyne d’Iberville. The two had been sent to defend France’s claim on the territory of Louisiana and held the celebration just south of the holiday’s future epicenter, New Orleans, at Point d’Mardi Gras.

A couple of decades later, Bienville founded New Orleans and soon Carnival celebrations were an annual event highlighted by lavish balls and masked spectacles. Some were small, private parties with select guest lists, while others were raucous, public affairs… Parades officially began in 1838.

5. Women Have Been Exposing Their Breasts for Beads Since the 19th Century

Revelers beg for beads to be tossed from a balcony in the French Quarter during Mardi Gras day on February 16, 2010 in New Orleans, Louisiana. (Patrick Semansky/Getty Images)

One of the most famous traditions of modern Mardi Gras is the exchanging of bead necklaces for the exposing of breasts. According to the International Business Times:

The tradition of bead throwing starts with their original colors. The color of the beads was determined by the king of the first daytime Carnival in 1872. He wanted the colors to be royal colors – purple for justice, gold for power and green for faith. The idea was to toss the color to the person who exhibited the color’s meaning.

However, beads were originally made of glass, which isn’t the best for tossing. Plastic beads perpetuated the flashing of breast, but one article in 1889 from Times-Democrat observed and documented the “degree of immodesty exhibited by nearly all female masqueraders seen on the streets.”

Read more about Mardi Gras in Spanish at AhoraMismo.com: 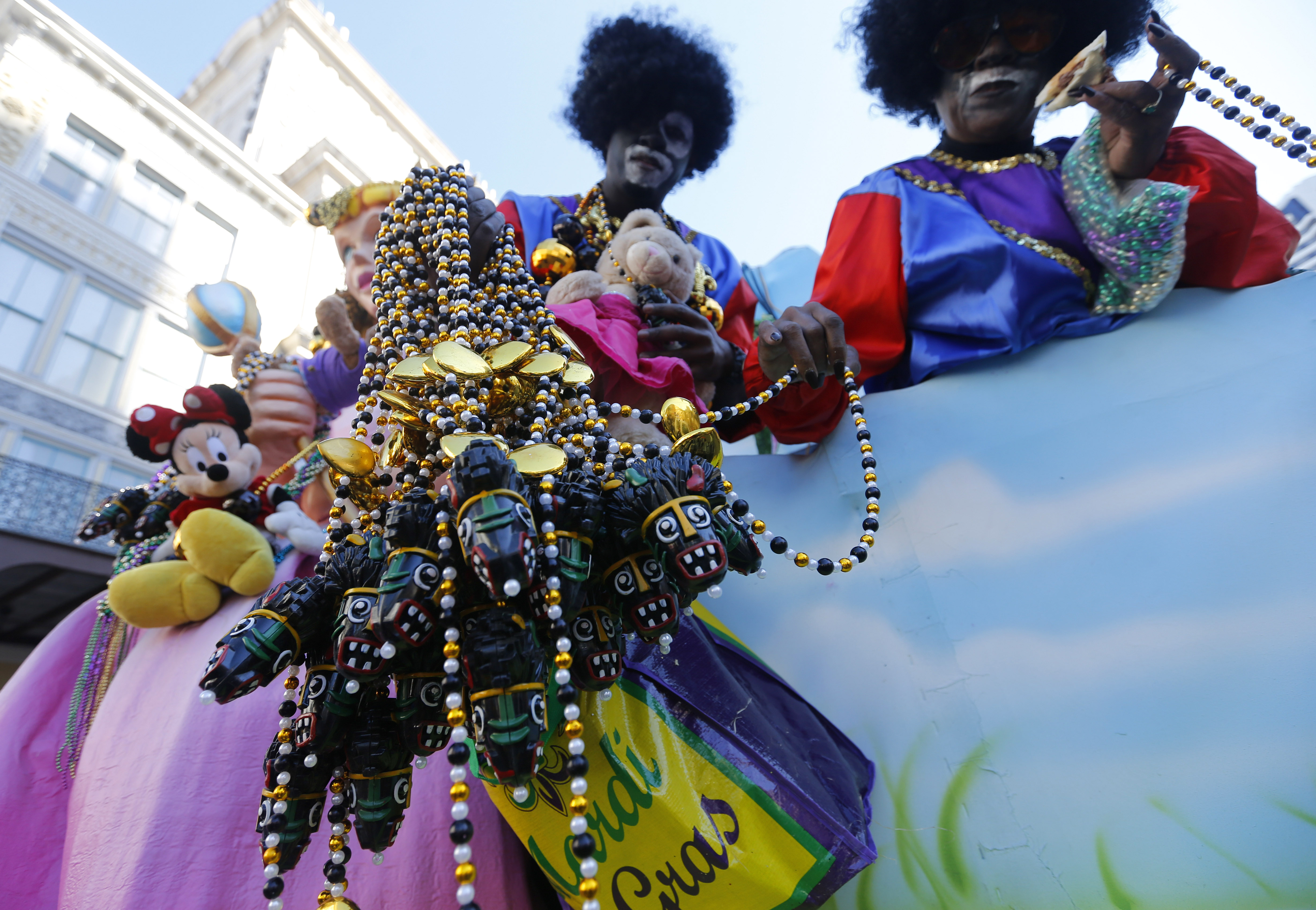