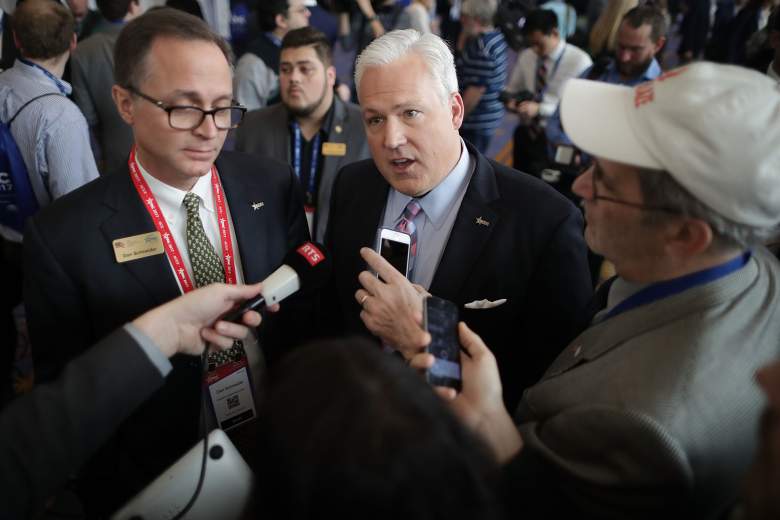 Matt Schlapp speaks to reporters at CPAC on February 23, 2017. (Getty)

Matt Schlapp is the chairman of the American Conservative Union, the organization that puts on the yearly Conservative Political Action Conference.

In his role as chairman, Schlapp has appeared all throughout CPAC 2017, hosting a panel with Steve Bannon and Reince Priebus. He was assigned to introduce President Donald Trump. He is married to Mercedes Schlapp, a possible replacement for Hope Hicks’ job as White House Communication Director.

Here’s what you need to know about Matt Schlapp.

1. He Served as Campaign Manager for Republican Congressman Todd Tiahrt 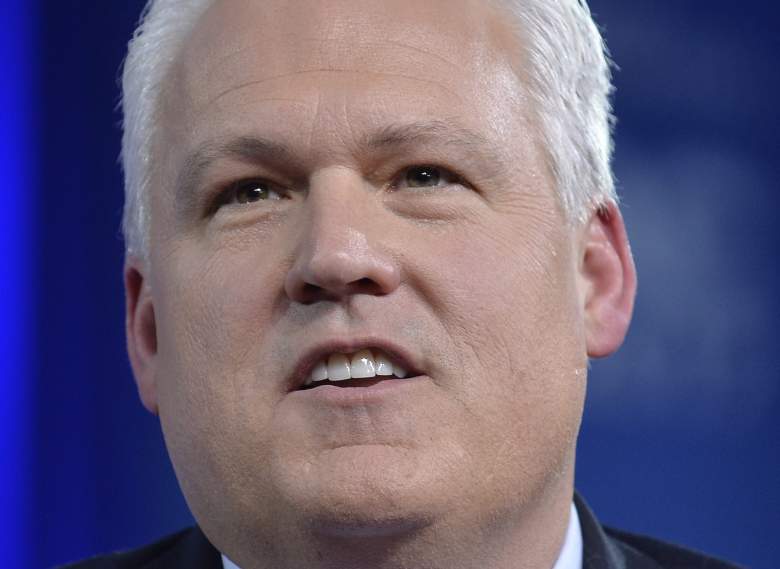 Matt Schlapp speaks during a discussion at the Conservative Political Action Conference. (Getty)

Matt Schlapp began his political career serving as the press secretary, campaign manager and chief of staff for Todd Tiahrt, who in 1994 was elected to represent Kansas’s 4th district.

Tiahrt came into office during the historic 1994 midterm elections, during which Republicans took control of the House of Representatives for the first time in decades. He won 52.9 percent of the vote and defeated Democrat Dan Glickman.

During the 2010 election, Tiahrt ran for a seat in the U.S. Senate and lost. He then ran to regain his House seat but was unsuccessful. Most recently, in 2014, Tiahrt was defeated by Mike Pompeo in the Republican primary. When Pompeo became Donald Trump’s CIA director earlier this year and his seat became vacant, Tiahrt once again ran but lost in the Republican primary.

2. He Was a Political Director for President George W. Bush

Matt Schlapp worked for George W. Bush during the 2000 election, and after Bush was elected president, Schlapp became political director in the White House.

According to Cove Strategies, Schlapp at the White House advised the president, the vice president, members of the cabinet, and senior White House staff. He also remained in contact with Congress and with federal agencies.

In 2004, Schlapp left the White House and began working for Koch Industries.

3. He Said That Donald Trump Was ‘Disrespectful’ For Not Attending CPAC 2016

Donald Trump is attending CPAC this year, as he has in years prior, but he completely skipped the event in 2016.

Matt Schlapp said in an interview with Bloomberg in March 2016 that the reason for this was because the format of the event would see each Republican candidate giving a short speech and then taking questions, and Trump did not want to take any questions; he also wanted to give a longer, rally-style speech. Schlapp said that he refused to change the format for Trump just because he was the frontrunner at the time, which resulted in Trump dropping out.

“It’s disrespectful,” Schlapp said of Trump’s decision not to attend CPAC. “It sends a message that there are priorities that are greater than talking to conservatives.”

Schlapp did not endorse any candidate during the Republican primary, but he did come to Trump’s defense in the early days of the campaign when Trump was still considered by many to be an entertaining sideshow rather than a legitimate candidate.

“I think it is easy for people to attack Donald Trump over what he said,” Schlapp said after Trump’s statement that many undocumented immigrants from Mexico are rapists. “I think they ought to listen to what he is saying. I actually know Donald Trump. He is not a racist. He is trying to characterize the fact that a broken immigration system can lead to a lot of problems.”

Schlapp did say, however, that the “tone and the words he chose are different from what I would choose.”

4. His Wife is Mercedes Schlapp, Who He Met at the Bush White House

Matt Schlapp met with wife Mercedes while working at the White House; Mercedes served as President George W. Bush’s director of specialty media. She also worked on Bush’s 2000 and 2004 campaigns, and she is now a Fox News commentator.

Mercedes Schlapp is a Cuban-American, and in a piece for Fox News in November 2016, she said that her father was an outspoken critic of Fidel Castro and was thrown in jail.

“On the first day of his imprisonment, he spoke to one his friends and had to tell him that he would be executed the next day by a firing squad,” she said. “It is just one of many stories of the horrors of the Castro brothers who are both guilty of the countless executions of innocent men and women.”

In a 2015 interview, both Matt and Mercedes said that September 11th, 2001 was the day that they both realized they wanted to spend the rest of their lives together.

“It was pretty much melee in the White House, and I remember thinking there were only two things I wanted to do: I wanted to call my family and tell them I was okay, and I wanted to figure out where Mercy was,” he said. “I finally tracked her down, and I realized at that moment that she was awfully special to me and I wanted to spend the rest of my life with her.”

5. He Has Five Children

Matt Schlapp and his wife Mercedes live in Alexandria, Virginia, and they have five daughters.

All five of Matt’s daughters made an appearance at CPAC 2015, the first CPAC event held after Matt was elected chair of the American Conservative Union. Matt’s oldest daughter, Vianna Schlapp, briefly spoke and said that her father is her hero.

“Everyone has a superhero in their lives,” she said. “Mine is my dad. He is such a great inspiration in my life. He has taught me the importance of loving God, loving others, and loving our great nation…He reminds me that America is the greatest nation is the world and that I should never take my freedoms for granted.”