During severe weather in southern Louisiana, a radar-confirmed tornado touched down in New Orleans East, causing severe damage on Tuesday, February 7. The National Weather Service issued severe tornado warnings, and at least eight other confirmed tornadoes swept through the region. There were also reports of injuries.

New Orleans Mayor Mitch Landrieu told residents in a press conference not to go to New Orleans East. “It is totally shut down,” he said.

There have also been dangerous thunderstorms and hail reported in southeast Louisiana and southern Mississippi.

Facebook also began a safety check for people living in the area, to notify their friends and family if they are safe.

Here is a map by the New Orleans Advocate, showing that there were nine confirmed tornadoes on Tuesday, along with two possible tornadoes. Louisiana Governor John Bel Edwards confirmed that tornadoes touched down in Livingston, Tangipahoa, Orleans, Ascension, Jefferson, St. James and St. Tammany parishes. At least 20 injuries in total were reported.

Here’s what we know about the tornadoes. This is a breaking story and will continue to be updated. All times are local central time.

1119a- Now a radar CONFIRMED TORNADO in New Orleans East. If you're in the path of this storm, take shelter IMMEDIATELY. pic.twitter.com/MYQIlUy0BO

The National Weather Service tweeted that the tornado in New Orleans East was confirmed at 11:19 a.m. Meg Farris of WWLTV reports that there were four adults and one child with injuries rushed to New Orleans East Hospital. Most of them are minor, but one injury was a head injury.

The tornado has also knocked out power in the area. The New Orleans Advocate reports that Entergy says over 9,2000 homes are without power. 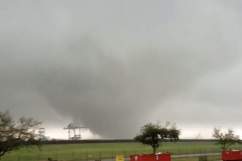 2. The Severe Weather Extends From Southeast Louisiana to Southern Mississippi

Tornado watches are in effect for southeast Louisiana and southern Mississippi until 2 p.m., reports WSDU. According to the station, rain will taper off in Tuesday evening, but there is more strong weather expected through Thursday. Regular temperatures are expected to return by Friday.

The Associated Press reports that the tornado watch in Mississippi includes the Jackson, Hattiesburg and Biloxi areas.

For a complete list of the Louisiana Parishes under a Tornado Watch, click here to go to the National Weather Service. 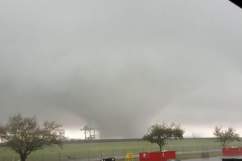 New Orleans Tornado: Photos of the Storms & Damage in Louisiana

3. The NWS Wants Residents to Keep Away From Tornado-Damaged Areas

The NWS urges residents to stay away from tornado damaged areas. That way, clean-up crews can work unencumbered. The NWS advises that, after a storm, residents should listed to local officials for instructions; check-in with family and friends; watch our for debris and downed power lines; and stay out of damaged buildings. If you lost power, don’t use candles. Instead, use flashlights or battery-powered lanterns.

Please stay away from the tornado damaged areas. Many power lines down and need to keep roads clear for emergency workers!!!

The New Orleans Advocate reports that a temporary shelter will be set up at the Joe W. Brown Recreation Center for those whose homes have been severely damaged by the tornado.

Residents have still continued to post new photos of damage in the area, though.

“It’s bad. I’ve never seen it this bad. As far as I can see, treetops are off, power lines down,” James Thomas, a New Orleans East resident, told Fox News. 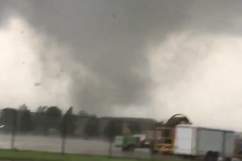 4. A NASA Facility Was Damaged by the Tornado & All Personnel Are Safe

NASA confirmed on Twitter that its Michoud Facility was damaged by the tornado at 11:25 a.m. Thankfully, only minor injuries were reported and all personnel is accounted for.

The agency notes that there is still severe weather near the facility, so personnel are still monitoring.

The Rev. Jeffery Friend, pastor of Suburban Baptist Church, told the Advocate that his church has been destroyed and the roof of his house is gone. The church had survived Hurricane Katrina, but it couldn’t withstand a tornado.

“I was there. I live right behind my church…and it blew off the roof of my house and destroyed the church,” he told the Advocate. “The church is gone.”

5. There Was Also a Tornado in Killian

NOPD IS REQUESTING ALL AVAILABLE OFFICERS TO NEW ORLEANS EAST, TO ASSIST WITH EMERGENCY RESPONSE TO TORNADO.

Another tornado was confirmed by radar south of Killian, a town of about 1,200, reports Weather.com. The site reports that this tornado possibly crossed Interstate 55.

Fox News reports that the White House is monitoring the storms. President Donald Trump will contact officials in the hardest-hit areas, the administration said.

1122a- Tornado capable of producing considerable damage on the ground in New Orleans East. Take shelter IMMEDIATELY if in this storm's path! pic.twitter.com/YoK3vdX60y

The possible tornado also damaged the Sunshine Bridge area. According to the early report one person was injured there, although the extent of the injuries is unknown. 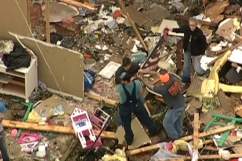