On February 6, President Donald Trump‘s administration released a list of 78 terror attacks it claims was underreported by the media. One of them was the murder of British tourist Mia Ayliffe-Chung, whose mother said that her daughter’s death in Queensland, Australia was not terrorism.

She blasted Trump with an open letter on social media and later wrote an op-ed for The Guardian that was published on February 8. This isn’t the first time Ayliffe’s daughter’s murder was connected to terrorism, even though police have since ruled that out.

“…Surely some White House minion with a list to compile could take the trouble to get the facts right: Mia and Tom’s deaths were not committed out of some misguided interpretation of the Qur’an,” Ayliffe wrote.

Here’s a look at the murders of Mia Ayliffe-Chung and Tom Jackson, and what Ayliffe has to say to Trump.

1. Australian Police Ruled Out Terrorism as the Cause of Ayliffe-Chung’s Death

The 21-year-old Ayliffe-Chung and 30-year-old Tom Jackson were fatally stabbed in Home Hill, Queensland, Australia on the night of August 23, 2016. Both were British nationals staying at a hostel there. Ayliffe-Chung died at the scene, and Jackson tried to save her. He died from his own wounds five days after the attack.

According to the Townsville Bulletin, the suspect in the murder was 29-year-old Smail Ayad of France. The Bulletin reported that Ayad had an obsession with Ayliffe-Chung and police believed his motive had nothing to do with terrorism. He acted out after he learned that she took revealing photos and didn’t feel the same way about him.

Police said he then stabbed her multiple times at the hostel, yelling “Allahu Ackbar” and was found muttering the same phrase when first responders arrived at the scene.

“We are considering all options here. We are working very closely with our partner agencies to ensure that if there is any indication that this has an extremist slant to it or this person had been radicalised, we would be able to discover that,” AFP Commander Sharon Cowden told the Bulletin at the time. “At this stage, we have no evidence of that.”

The BBC reported that police later determined that terrorism was not the motive in this case. 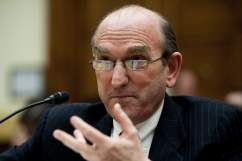 2. Australian Politicians Called for a Pause on Muslim Immigration, Even Though Terrorism Was Ruled Out

As the Guardian reported in August 2016, terrorism was quickly ruled out. But this didn’t stop Australian politicians from linking it to terrorism because Ayad allegedly said “Allahu Ackbar.”

Queensland senator Pauline Hanson, leader of the One Nation party, used the murder to push for calls on a ban of Middle Eastern and North African immigrants to Australia. She said she was “not going to be silenced on yet another attack involving Islamic extremism – especially one occurring in the state I am representing in the Senate.”

Hanson’s party website includes an entire page on Islam and notes that, if elected, the party would “Stop further Muslim Immigration and the intake of Muslim refugees until we can assure the safety of Australians.”

When officials cautioned against commentary that linked Ayfille-Chung’s murder to terrorism, another politician, George Christensen, called them the “political correctness brigade” on Facebook. 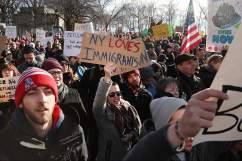 3. Ayliffe-Chung’s Mother Writers That She Was ‘Affronted’ By Trump’s Inclusion of her Daughter’s Murder on a List of Terrorist Attacks

In her op-ed for the Guardian, Rosie Ayliffe called Trump’s inclusion of her daughter’s murder on the list of underreported terrorist attacks as a “crass and callous error.” She said that she wasn’t shocked by it, because politicians in Australia had already used her daughter’s murder for political reasons, but she was still “affronted” by it.

“Our children’s deaths were ugly, brutal, and must have been utterly terrifying, and I find my mind attempting to recreate those events on a regular basis. This is a hurtful process, but I think it’s something I need to go through out of my love for Mia. And one day I am going to find the strength to visit the place where she died and meet Daniel Richards, the man who sat with her, risking his own life through those long hours of her death, and held her hand to soothe her while she died in his arms.”

Ayliffe-Chung was her only child, and a “joyful creature who could light up a room with a smile,” her mother wrote. She acknowledged reports that Ayad had threatened her daughter before Ayliffe-Chung went to Australia.

“Why was my girl placed in a dormitory with a potential killer, who had been ‘acting strangely’ in the weeks and months up to her arrival? I can only guess that nobody cared enough to protect her,” she wrote.

Ayliffe noted that her daughter was a migrant worker. “So Trump is right: there is a connection between my daughter and those travellers he wants to strip of their humanity and dignity in airports around the United States,” she wrote. “But it’s not the connection he would wish to make. The connection is that my girl’s life was also held in scant regard by a harsh and unforgiving system that doesn’t value basic human rights.” 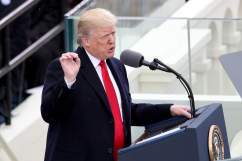 .@realDonaldTrump An open letter regarding the deaths of the heroic Tom Jackson and my daughter, Mia Ayliffe-Chung: pic.twitter.com/e4oK5eey0H

The Daily Mail reports that Ayad had been working at the farm near the hostel when he met Ayliffe-Chung and allegedly became obsessed with her before the murder. At the time, Ayliffe-Chung was working at a bar where waitresses serve in skimpy outfits.

In an open letter to Trump, which Ayliffe posted on Twitter to get the president’s attention, she wrote that her daughter’s friends never saw Ayad pray or follow any of the Islamic rituals.

“An Islamic fundamentalist by definition must respect the five pillars of Islam,” Ayliffe wrote. “It would be very hard to imagine someone managing to perform this ritual five times a day in the close confines of Home Hill Hostel without witnesses.”

She ended her letter by writing, “This vilification of whole nation states and their people based on religion is a terrifying reminder of the horror that can ensue when we allow ourselves to be led by ignorant people into darkness and hatred.”

After her daughter’s death, Ayliffe went to Australia to look at the environment her daughter lived in and was shocked by what she saw. She created a Change.org petition to get the Australian government to look into a “visa scheme.”

According to the Independent, Ayliffe-Chung had to work 88 days on a farm to keep a visa to stay in Australia for a second year.

“It was Mia’s idea. I didn’t realise until I met her friend who told me that she had an idea that Australia needed a centralised database through which young people could access what farm work is available, what the pay is, and what working conditions are like,” Ayliffe told the Independent. “I think we need a regulated industry, with proper checks and balances, and health and safety inductions. These are all the things we expect and they are all guaranteed by EU regulations to our workers in this country.”

She told the Independent that hr daughter complained about “extreme working conditions.” If she knew what her daughter was living through, she would have done everything in her power to bring her daughter back to England.