A 17-year-old Utah girl is home safe after her family alleges that she was kidnapped by sex traffickers in Las Vegas. Sarah Dunsey was returned home on February 19, a few days after her mother, Amie Ellis, posted a YouTube video saying her daughter had been abducted. In the video, Amie Ellis says, “She is being held against her will and Sarah is a victim of sex trafficking. This is my absolute worst nightmare. We need Sarah home. We have to have her home. I cannot wonder where she is, and if she is safe. Please help us find her.” Ellis also named a suspect in the clip but the name was redacted so as not to alert the suspect, according to the family. The suspect’s name came from the last text sent by Dunsey.

The teenager disappeared on January 15 and was found a month later in Venice, California. Her mother said that it was an anonymous tip that led to Dunsey being discovered by her family members.

In a shocking report that emerged days after Dunsey was returned home, the Daily Mail says that Las Vegas cops say there’s no evidence of the allegations. The LVPD told the newspaper that they were notified that Dunsey was missing until two weeks after her parents alleged she vanished.

Logan Police Department Captain Curtis Hooley told the Daily Mail, “It is unclear why Sarah’s parents did not discuss her whereabouts between January 3 and January 16.” Hooley went on to say that he is “unsure” of the closeness between Dunsey and her mother. Captain Hooley added that, “She left [the hotel in Las Vegas] with a couple of other males. She did not appear to be struggling. She didn’t seem unwilling at all.” While Officer Michael Rodriguez of the Las Vegas PD told the Daily Mail, “Her mother told us that she was taken by sex traffickers. We found that not to be true… There was no kidnap. She was not kidnapped in Las Vegas and as far as we are concerned, there is no evidence that any crime has occurred.” 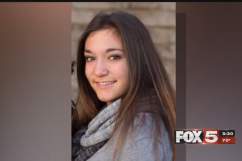 2. An Emotional Video Showing Dunsey Being Reunited With Her Family Has Been Posted on Facebook

Dunsey was staying with friends at the MGM Grand when she vanished. In a picture posted on her stepmother, Terri Dunsey’s, Facebook page the caption reads, “Feels so amazing to hold this beautiful young lady in our arms again!! Thanks again everyone.”

The above video was first posted on the Help Us Find Sarah Dunsey Facebook page. It shows Dunsey embracing her siblings while crying can be heard in the background. Her mother wrote in the description, “Sibling love. It was an emotional return. Many people are curious about what happened and are anxious to hear more details. We will share a little bit more in the coming week. We appreciate your continued support and kindness.”

Her stepfather, Todd Ellis, told the Daily Mail, “No parent or child should have to experience what we have been through. We are thankful for all the good people that helped in the recovery of Sarah. This was truly a miracle.”

In a separate Facebook post, Dunsey’s mother says that it was a tip that led to her daughter being found. While her aunt, Trina McCulloch, told Fox Salt Lake City that authorities arrested two men in connection to the disappearance. Though authorities have yet to confirm this. The station adds in their report that the FBI is involved in the investigation. The town of Venice, California, is around 300 miles west of Las Vegas.

3. Dunsey Was a Victim of Bullying on Ask.fm

From viewing Dunsey’s Ask.fm page, it’s clear that she had been a victim of cyber bullying. The controversial site has in the past been linked to teen bullying as well as cases of suicide among young people. Various users asked disparaging questions towards Dunsey and her family. Other, more friendly, questions concentrated on typical teenage issues of crushes and schoolwork. Shortly after the publication of this article, Dunsey’s page was deleted.

4. Her Mother Works as a Model & Personal Trainer

Dunsey’s mother goes by Amie Maesato Ellis and works as a personal trainer and model, according to her Facebook page. Dunsey lives with her mother and stepfather, Todd Ellis, in the town of St. George, Utah, close to the Nevada border, about 120 miles east of Las Vegas. While her father, Michael lives with his wife, Terri, in Logan, Utah, at the northern tip of the state. In total, Dunsey has a full brother and sister as well as four stepbrothers.

5. There Are Nearly 21 Million Sex Trafficking Victims in the World

The Children Of The Sex Trade (Crime Documentary) | Real StoriesThis exceptional film follows two young sisters in the Philippines who help former Australian police and Special Forces officers rescue underage girls from sex bars. In the Phillipines, over 800,000 women and children work in the sex-trade. Police corruption makes local law enforcement ineffective in protecting the most vulnerable groups from abuse. 16 year-old Michelle and 19 year-old Marisol were both abused by foreign men as children and had also worked in Subic Bay’s sex bars. They now work at PREDA, a human rights foundation set up in 1974 by Fr. Shay Cullen, an Irish Catholic priest. Together, with former Australian Federal Police officers, the group sets out on a sting operation to bring child-abusers to justice. With exclusive access, this is a gripping investigation into an urgent crisis led by the brave, teenage sisters who sacrifice their own safety to save others from the same fate. Want to watch more full-length Documentaries? Click here: http://bit.ly/1GOzpIu Follow us on Twitter for more – https://twitter.com/realstoriesdocs Facebook – https://www.facebook.com/RealStoriesChannel Instagram – @realstoriesdocs Content licensed from TVF International. Any queries, please contact us at: owned-enquiries@littledotstudios.com Produced by FairTrade Films2016-12-16T18:00:04.000Z

The Atlantic Monthly reported in February 2016 that there are 20.9 million sex trafficking victims in the world. Human trafficking is defined by the Department of Homeland Security as a “modern-day form of slavery involving the illegal trade of people for exploitation or commercial gain.” While the United Nations says that sex-related industries are the most common driver behind sex trafficking.

While in 2016, the National Center for Missing & Exploited Children said that 1 in 6 runaways become caught up in sex trafficking.

Read More
5 Fast Facts, Breaking News, Crime
A 17-year-old Utah girl is home safe after her family alleges that she was kidnapped by sex traffickers in Las Vegas.