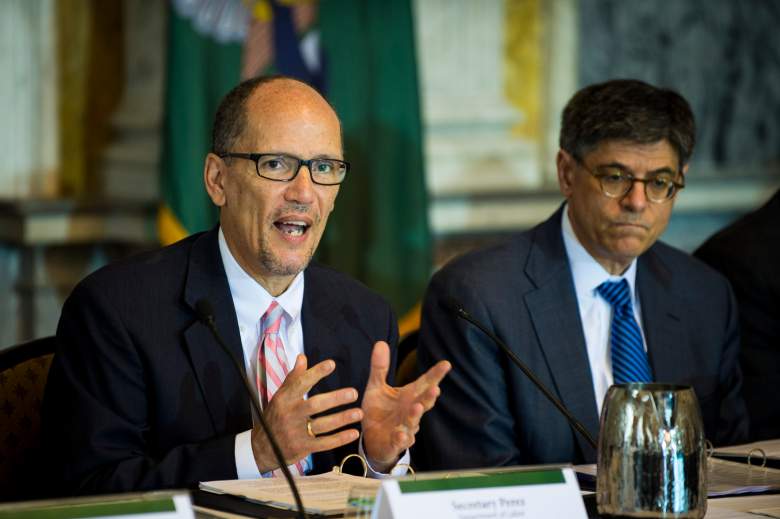 Thomas Perez speaks during a public meeting of the Financial Literacy and Education Commission at the United States Treasury on June 29, 2016 in Washington, DC. (Getty)

The former U.S. labor secretary was elected to the position during a meeting of the DNC on February 25th. He defeated Keith Ellison, but Ellison was subsequently made deputy chair of the committee.

Although Perez and Ellison line up on many issues, Perez was generally the nominee of choice among those who supported Hillary Clinton during the 2016 Democratic presidential primary, while Keith Ellison was the nominee of choice among Bernie Sanders supporters. Although Hillary Clinton did not endorse any DNC chair candidate, Bernie Sanders endorsed Keith Ellison, and former vice president Joe Biden endorsed Tom Perez.

Here’s what you need to know about Tom Perez’s stances on various issues and how he compares to his fellow Democrats.

1. He Says That Democrats Have Ignored Rural Americans 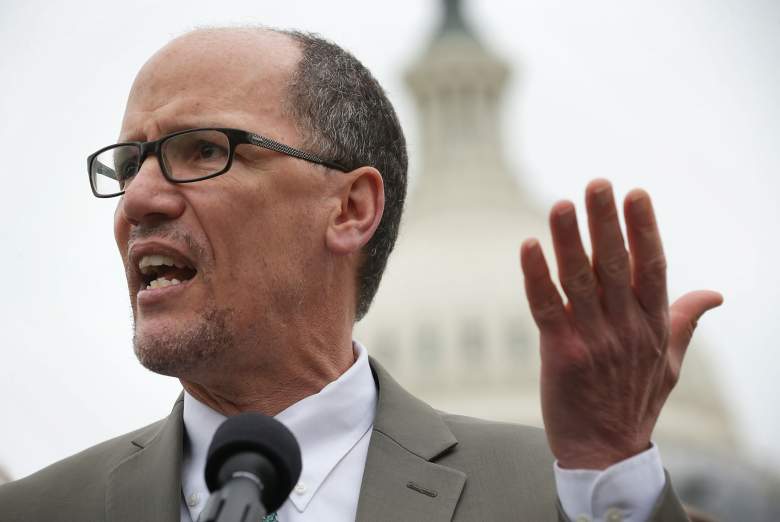 One of the most important questions for Democrats going forward is, “Why did Hillary Clinton lose the election?” Perez says that the Democratic party as a whole has ignored rural Americans, and that’s something he’d like to change.

“I’ve spent the last few weeks in rural Wisconsin and Kansas,” he told Think Progress. “I think the DNC chairs needs to make house calls, and what we need to do as party is ask, ‘Why did we fare so poorly in big swaths of rural America? What is it about our message that’s not resonating?’ What I learned in these trips is that rural Democrats are discouraged about the fact that the national party does not provide enough help. We’ve ignored them.”

He went on to say that he wants to “change the culture of the Democratic party,” adding, “Our message still resonates when we can communicate it effectively: Democrats are the party that brought you good jobs across America, that brought you Medicare, Medicaid, Social Security. The Republicans are the party that has tried to fray that safety net.”

In another recent interview with the Milwaukee Journal Sentinel, Perez said, “The message of opportunity and inclusion of the Democratic Party should resonate in every ZIP code. And it’s clearly not, judging from the outcome of this election.”

Perez himself is originally from Buffalo, New York, and he currently lives in Takoma Park, Maryland.

2. He Says the Democratic Primary Was Not Rigged Against Bernie Sanders

Another major point of contention among Democrats is in regards to how Bernie Sanders was treated during the 2016 Democratic primary and whether the deck was unfairly stacked against him. Samuel Ronan, who was a long-shot candidate for DNC chair, flat out said that Debbie Wasserman Schultz “violated the Democratic process” during the 2016 primaries.

Tom Perez does not share this opinion, though it was reported by NBC News in early February that Perez had said in a meeting with Kansas lawmakers, “We heard loudly and clearly yesterday from Bernie supporters that the process was rigged and it was. And you’ve got to be honest about it.”

But he later walked that statement back on Twitter, saying, “I have been asked by friends about a quote and want to be clear about what I said and that I misspoke. Hillary became our nominee fair and square, and she won more votes in the primary—and general—than her opponents.”

Perez was asked about this at a recent DNC debate, and he said that the Democratic primary was not rigged against Bernie Sanders, but that there was an “absence of transparency” that allowed for people to think it was rigged.

During that same debate, Samuel Ronan doubled down on his belief that the primary was rigged.

“Not only was the primary rigged, it was also rigged all across the country because the DNC has never allowed outsiders, or brand new people, to rise through the ranks,” Ronan said. “It has always been an insider game.”

3. He Supports Raising the Federal Minimum Wage to $15 an Hour 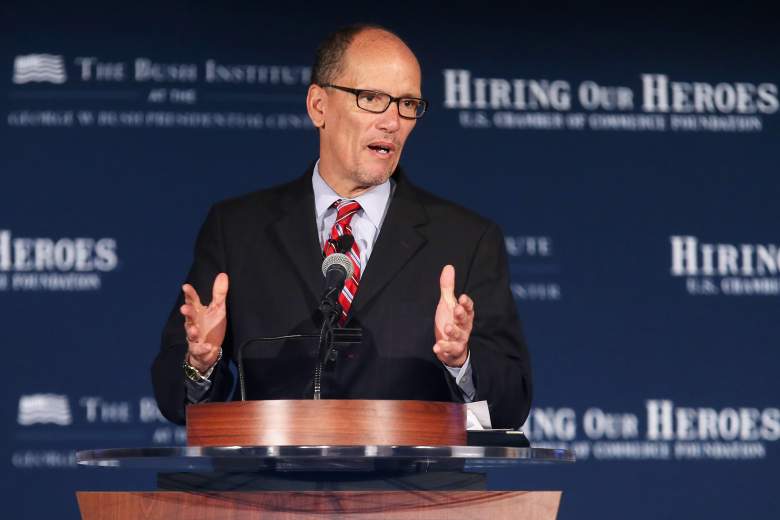 Thomas Perez addresses a summit on “creating employment opportunities for post-9/11 veterans and military families” at the U.S. Chamber of Commerce June 24, 2015 in Washington, DC. (Getty)

While he was secretary of labor, Tom Perez expressed support for the movement to raise the federal minimum wage to $15 an hour.

“I’m proud to stand with the Fight for $15 movement,” Perez said in August 2015. “And it really is a movement. It’s for shared prosperity.”

During the 2016 presidential election, Hillary Clinton advocated for a $12 federal minimum wage, while Bernie Sanders said it should be $15. However, Clinton was supportive of state-by-state efforts to raise the minimum wage to $15 an hour.

“We are fighting for an honest day’s pay for an honest day’s work,” he said, according to the Washington Examiner. “It is a moral and economic imperative that we raise the federal minimum wage. People who work full-time in America shouldn’t live in poverty.”

4. He Supported the Trans-Pacific Partnership

There were some major disagreements among Democrats in 2016 on the issue of trade, especially when it comes to the Trans-Pacific Partnership, which Bernie Sanders opposed and Hillary Clinton called the “gold standard in trade” before eventually opposing as well.

When asked in a July 2016 interview if he still supports the TPP, Perez said, “Absolutely. Absolutely what we have done in the negotiations with Mexico and with Vietnam are I think some of the most far-reaching protections that we’ve seen in a labor agreement. And that’s the work that I have done and I’m proud of that work we’ve done.”

And in an interview with PBS conducted at the 2016 Democratic National Convention, Perez explained, “Globalization is a force that we can’t put the genie in the bottle. I think that we have a lot more agreement than meets the eye because what the president’s trying to do, and there’s a viewpoint diversity among progressive Democrats on this issue, is to put American values on globalization. So that means his North Star in any trade agreement is the American worker.”

However, he told The Washington Post that the North American Free Trade Agreement (NAFTA) was “woefully weak in protecting workers and on the enforcement side.”

“NAFTA was promises made that weren’t promises kept,” Perez told PBS in 2016.

5. He Was Endorsed by Joe Biden, While Bernie Sanders Endorsed Keith Ellison 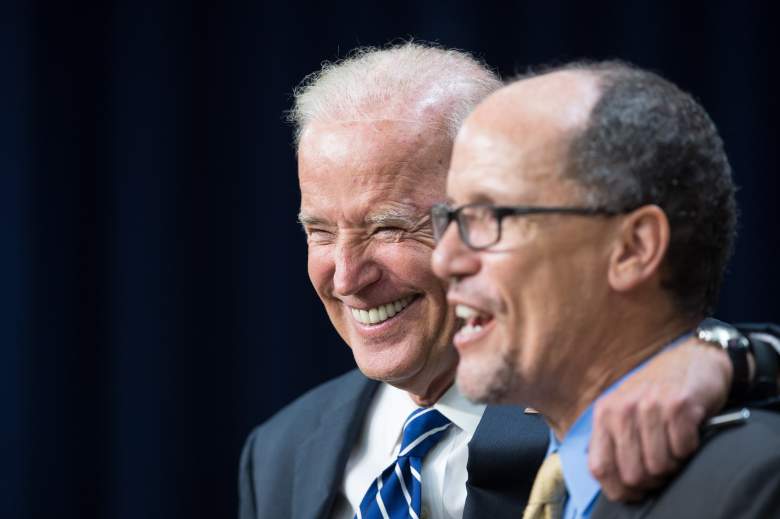 Tom Perez as he arrives to address the Apprenticeship Summit at the White House in Washington, DC, on September 8, 2015. (Getty)

To give you an idea of what other prominent Democratic politicians Tom Perez lines up with, he was endorsed by former vice president Joe Biden.

“Tom knows how to talk to people, not down to them,” Biden said in a statement upon announcing his endorsement. “He knows how to explain why our party’s core beliefs matter to the immigrant family in Arizona and the coal miner in West Virginia. That matters.”

“The question is simple: Do we stay with a failed status-quo approach or do we go forward with a fundamental restructuring of the Democratic Party?” Sanders said in a statement. “I say we go forward and create a grassroots party which speaks for working people.”

After Perez was appointed chair of the DNC, Sanders said on Twitter, “It’s imperative Tom understands that the same-old, same-old isn’t working and that we must bring in working and young people in a new way.”

Perez supported Hillary Clinton during the 2016 Democratic presidential primaries, and he said of Sanders in April 2016, “I appreciate the idealistic vision that Sen. Sanders articulates, but we are a nation of dreamers and doers and the folks I talk to who want to adjust their status — they don’t want revolutions. They want results.”

Loading more stories
wpDiscuz
8
0
Would love your thoughts, please comment.x
()
x
| Reply
Tom Perez is the new chair of the Democratic National Committee. Here's where he stands on some key issues.