Reports of an active shooter at Ben Taub Hospital in Houston, Texas flooded social media February 21. Police and SWAT teams quickly responded to the scene, but later told reporters in a briefing that no evidence of a shooter or any victims were found.

Houston Police said about 30 minutes after arriving on scene that officers continued to search the hospital, but there were no reports of any injuries.

Officers in the process of searching the hospital; no reports of injuries at this time #hounews

Source tells me surgeons kept operating during the evacuation, sent out medical students.

Despite the conflicting reports, Shelby Webb of the Houston Chronicle wrote that an alleged shooter was barricaded on the third floor of the hospital.

People and workers inside of the hospital said on social media that they are on lock down and have sheltered in place.

@dannyherm1 @KHOU my friend is a nurse there and he is hiding in the closet.

Some patients at the hospital were evacuated and could be seen outside of the hospital with doctors, nurses and law enforcement being rushed to a safe area.

For additional coverage of the situation, watch below:

This post will be updated when more information is available. 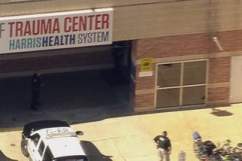 Loading more stories
wpDiscuz
1
0
Would love your thoughts, please comment.x
()
x
| Reply
There were reports of an active shooter at Ben Taub Hospital in Houston, Texas. Watch the live video of the scene from outside the hospital.