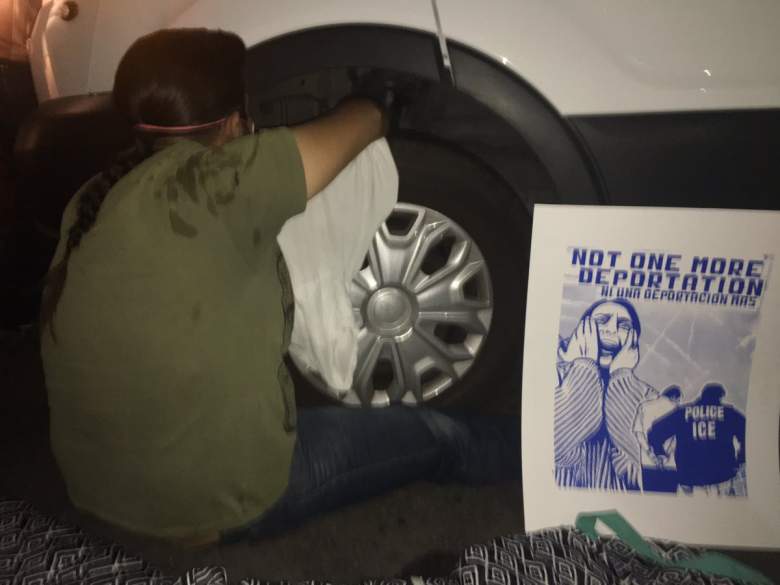 An activist tries to stop an ICE van from leaving the agency’s headquarters in Phoenix, Arizona. (Twitter)

Guadalupe Garcia de Rayos has reportedly been transported from the United States Immigration and Customs Enforcement headquarters in Phoenix, Arizona to be deported to Mexico.

Garcia had been convicted in 2009 of submitting false papers when her workplace was raided in 2008 by the agency, arresting her and several other employees for using the fake information to gain employment, the New York Times reported. She had been reporting to the immigration agency every six months, and it had been feared that with President Donald Trump’s sweeping executive order, she would indeed be deported back to Mexico.

The order had called for harsher regulation of immigrants and also for those with criminal backgrounds to be deported. Garcia’s impending deportation caused her family and supporters to try and stop it from happening. Dozens took to the streets surrounding the building when Garcia was put into the backseat of an ICE van and transported to an undisclosed location.

Those who had hoped for her to stay on U.S. soil responded by bonding together and shouting at officials and trying to stop the van from traveling down the street.

Here are some of the videos and photographs from the scene that you need to see.

Late on February 8, vans rolled out of the ICE HQ in Phoenix reportedly to transport Garcia.

Protesters Tried to Stop The Van From Leaving

When the vans tried to leave the scene, some of Garcia’s supporters attempted to block the vans and stop them from moving.

Trump will definitely be tweeting about this.

ICE Moved Its Van Into a Secure Location

When the scene continued to unravel, officers moved the van back to a secure location with law enforcement officers stopping protesters from coming near.

#ICE has extracted their van back into secured parking lot. #Deportation #GuadalupeGarcia pic.twitter.com/kNvjICEPE5

Protests Continued Late Into the Evening

Read More
Breaking News, Donald Trump, Immigration
wpDiscuz
2
0
Would love your thoughts, please comment.x
()
x
| Reply
Guadalupe Garcia was been detained and to reportedly be deported as part of Donald Trump's immigration orders. See the videos and pictures from the scene.