Milo Yiannopoulos, the alt-right writer and public speaker, is holding a press conference Tuesday in New York City to address the recent controversies surrounding him, including his comments about pedophilia, his invitation to, and then dis-invitation from the CPAC conference and his loss of a $250,000 book deal.

You can watch a live stream of the news conference above.

The gay British writer has grown in prominence and controversy since President Donald Trump began his run for the White House two years ago. Milo has increased his audience by backing Trump and speaking out against what he sees as an anti-free speech movement in the United States driven by the need for “political correctness” from those on the left.

He was banned from Twitter for harassment, including targeting Saturday Night Live comedian Leslie Jones, and has drawn large protests during speaking engagements on college campuses, including a protest at UC-Berkeley last month that grew violent.

Yiannopolous was invited to speak this week at the Conservative Political Action Conference, or CPAC, in in Washington, D.C. His invitation was later withdrawn after a video emerged of him speaking about pedophilia, with some claiming he was defending it. He has denied being a supporter of pedophilia.

“We initially extended the invitation knowing that the free speech issue on college campuses is a battlefield where we need brave, conservative standard-bearers,” Matt Schlapp, chairman of the American Conservative Union, said in a written statement to the New York Times. He called Milo’s comments “disturbing” and said his explanation of them was insufficient.

The video also cost him a $250,000 book deal with the publisher Simon & Schuster, according to the Times.

And on Tuesday, just about an hour before the press conference, Milo announced he was resigning from his position as an editor at Breitbart. You can read his resignation letter here. 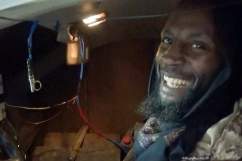