The Butte County Sheriff’s Department ordered the immediate evacuation of residents in affected areas near the Oroville Dam on February 12. At least 188,000 people were evacuated because of an overflow of the dam’s emergency spillway.

The spillway was being used for the first time in its history because of a giant crater in the dam.

In a press conference late Sunday night, the Department of Water Resources in California updated the situation and said that the it appears to be under control.

Officials said the water level of Lake Oroville has been reduced and the water flow over the emergency spillway stopped at 8:45 p.m. Pacific on Sunday.

The department held a press conference earlier Sunday and said the flow of Oroville Dam’s “auxiliary spillway” has decreased, and erosion hasn’t progressed as quickly as first feared. Sheriff Kory Honea said in the press conference that a plan was being devised to fill the hole and resolve the situation.

For additional coverage from the scene, watch here: 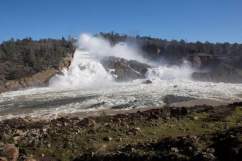 Read More
Breaking News, flooding
Due to the an overflow of the Oroville Dam's emergency spillway, at least 188,000 people were evacuated. Watch live coverage of the incident.