Paula Broadwell speaks out about a double standard for her and David Petraeus: "It's been a very difficult process" https://t.co/rNXFtiifwa

Former military officer and author Paula Broadwell appeared on Anderson Cooper 360 on February 13 to talk about a magnitude of things, including her affair with David Petraeus. Broadwell said about Petraeus’ capabilities to serve as the new national security adviser after Michael Flynn resigned amid controversy, “He should be able to move on” from the scandal and into the new government role.

Paula Broadwell on David Petraeus being considered for Flynn's replacement: "He should be able to move forward" https://t.co/Mz0Gcj6I8A

Petraeus, a retired four-star general and then the Director of the CIA, had an extramarital affair that became public information. Broadwell was his official biographer and co-authored All In: The Education of General David Petraeus in 2012 when he was the International Security Assistance Force commander.

Prior to assuming the role as the CIA’s director, he served over 37 years in the United States Army.

Petraeus ended up resigning as the CIA’s director when the FBI caught wind of the affair.

In the interview, Broadwell spoke about the fallout from the affair, what she described as a “very difficult process.”

Broadwell spent 20 years in the Army Reserves and later wrote for the New York Times and CNN in addition to the biography.

Petraeus and Broadwell met in 2006 at a speaking engagement when she was a college student. 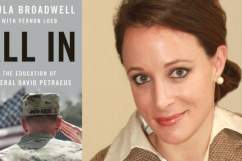