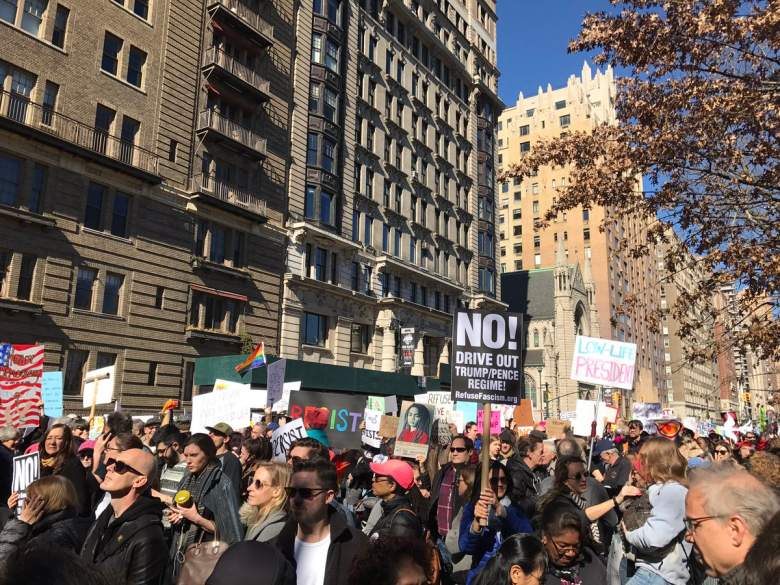 The Not My President’s Day rallies to protest the policies of President Donald Trump began today in New York City, where thousands gathered in Columbus Circle. The rally and others like it were timed for President’s Day, as well as the exact one-month anniversary of Trump’s inauguration.

Unlike other protests against Trump, these are meant to protest all of Trump’s policies. It was first organized by the Not My President’s Day group in Los Angeles, but the idea quickly spread throughout the country.

This video is a live stream of the event in New York:

Here are videos from the protests in New York and elsewhere. More will be added to this post as they are posted on social media.

This is a longer video of the atmosphere in New York, first posted on ABC News’ Facebook page.

Here is video shared by The Associated Press:

'Not My President's Day' Rally in New YorkDemonstrators came together in New York for a "Not My Presidents Day" rally against President Donald Trump to send the message that he does not represent their interests and calling on others to join them in peacefully resisting his presidency. (Feb. 20) Subscribe for more Breaking News: http://smarturl.it/AssociatedPress Get updates and more Breaking News here: http://smarturl.it/APBreakingNews The Associated Press is the essential global news network, delivering fast, unbiased news from every corner of the world to all media platforms and formats. AP’s commitment to independent, comprehensive journalism has deep roots. Founded in 1846, AP has covered all the major news events of the past 165 years, providing high-quality, informed reporting of everything from wars and elections to championship games and royal weddings. AP is the largest and most trusted source of independent news and information. Today, AP employs the latest technology to collect and distribute content – we have daily uploads covering the latest and breaking news in the world of politics, sport and entertainment. Join us in a conversation about world events, the newsgathering process or whatever aspect of the news universe you find interesting or important. Subscribe: http://smarturl.it/AssociatedPress http://www.ap.org/ https://plus.google.com/+AP/ https://www.facebook.com/APNews https://twitter.com/AP2017-02-20T19:02:45.000Z

This tweet shows video of a man dressed as Steve Bannon, controlling a puppet Donald Trump.

The following tweet has a short clip from an Austin, Texas protest.

Many begin to gather at Capitol steps for #NotMyPresident rally #Austin pic.twitter.com/U3DpSApPW0

This video is from Chicago:

Here’s video from a CBS Miami report on the rally in Miami.

Here is video from the Portland, Oregon protest: 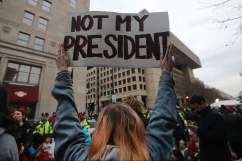 Not My President’s Day Protests: 5 Fast Facts You Need to Know