Police say Allen D. Cashe shot 6 people in Sanford. Killing one. 2 kids are in critical. All stemming from a domestic situation #FOX35 pic.twitter.com/pRKnxyhRR3

One of those shot – Cashe’s girlfriend – in the horrific March 27 incident has died, police said. Cashe, clad all in black, is accused of shooting four people in a home – his girlfriend, her father, and her two small children – before randomly shooting two strangers, including a female high school student standing at a bus stop, according to My News13.

The Sanford shooting was the latest in a string of mass shootings in America. On March 26, 17 people were shot – and one person was killed – at a nightclub in Cincinnati, Ohio. A few days before, four people were killed in a domestic violence shooting spree in Wisconsin.

1. Cashe Was the Boyfriend of the Woman Killed

According to the Orlando Sentinel, the woman who died in the mass shooting was the girlfriend of Cashe, 31.

Allen Cashe is accused of killing one, shooting five others is now heading to jail @MyNews13 pic.twitter.com/PIzw9Peqb0

“The couple began arguing over some belongings a few hours earlier at a gas station,” the newspaper reported.

When Cashe was brought out by police in front of the television cameras later on March 27, he had nothing to say and “just stared” at the cameras, according to a WKMG-TV reporter.

Sanford, Florida is infamous as the location where Trayvon Martin was killed by George Zimmerman, sparking protests throughout the country and giving birth to the Black Lives Matter movement.

2. Two Small Children Were Among Those Shot

In addition to her father, the deceased woman’s children were also shot and are in critical condition, reported MyNews13.

One of the children is fighting for his life, the television station reported.

According to Sanford police, officers who responded said the scene was one of the most “horrific” they have ever seen, reported WPBF-TV. 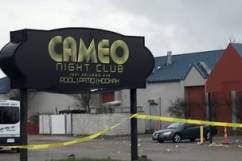 3. Cashe Has an Arrest History & Multiple Women Sought Protection Orders Against Him

The Orlando Sentinel reported that Cashe had a “long arrest history.”

The newspaper reported that Cashe “is on felony probation that was scheduled to be terminated Friday, but he also has a pending case against him on a charge of violating his probation.”

In the past, Cashe was accused of weapon and drug charges and four people had previously sought domestic violence injunctions against him, according to The Orlando Sentinel.

However, a woman who knew Cashe told a Fox35 reporter she thought Cashe was a “cool guy” before the shooting.

4. Cashe Is Accused of Randomly Shooting Other People, Including a Student Waiting for a Bus

WPBF-TV reported that police say, after shooting the four people in the house, Cashe allegedly proceeded to randomly target two “innocent bystanders” on the street.

The Orlando Sentinel reported that witnesses described how Cashe was allegedly dressed all in black when he shot the Winter Springs High student and another man.

Cashe was arrested and is in custody.

According to WESH.com, a police officer heard the shots emanating from the bus stop, leading police to track Cashe down and arrest him.

5. Police Had Intervened Earlier in the Domestic Argument

According to USA Today, police had responded earlier in the day to a domestic argument between Cashe and the female victim later murdered.

“Cashe and a woman became involved in an altercation at a gas station involving ‘property,'” USA Today quoted the police spokeswoman as saying.

According to USA Today, “Police were called, calmed both people down and left the scene. A short time later, police received a 911 call asking for an officer to check on the woman.” Another argument had ignited in the home, so officers responded and “quelled” it, the newspaper reported.

Cashe is accused of leaving but returning to the home around 6 a.m. March 27 and opening fire, USA Today reported.