A father shot and killed his twin teenage daughters, shot his wife in the legs, and then placed a chilling 911 call to police in a crime that has shocked an Illinois community.

Randall Coffland took his own life after shooting his wife, Anjum, and 16-year-old twins Tiffany and Brittany, who died inside the family’s condo in St. Charles, Illinois. The twins’ mother, Anjum Coffland, survived to place her own tragic call to authorities, in which she can be heard screaming in the background. You can listen to the 911 calls later in this article, but be aware that they are very disturbing.

“I just shot my two kids, and I shot my wife and now I’m going to shoot myself,” Randall Coffland said in the 911 call released by police, according to Patch.

“I want you to live and suffer like I did,” Randall Coffland shouts at Anjum on the 911 tape. Anjum calls police, says her husband killed her daughters, and screams. Another woman then calls 911 to report that Anjum was sitting in a pool of blood saying that her daughters were dead.

1. The Parents Lived at Separate Addresses & Police Responded to a Previous Call of Domestic Trouble

The Daily Herald reports that the parents were living at separate addresses, and there were reports of previous domestic trouble in the marriage.

Police say the father shot his twin daughters in the head in different rooms of the condo before shooting his wife in the legs and then killing himself, according to The Chicago Tribune. St. Charles is located about an hour from Chicago.

She didn’t post much; mostly, her posts are about kayaking and other common things, like the weather. Patch has a round up of fundraising sites to help Anjum.

Love living in St Charles.
So much to do.

According to the news site, officers previously “responded to a report of domestic trouble Feb. 9 on the 100 block of South 5th Avenue in St. Charles” but nothing physical had occurred during that instance.

The Chicago Sun-Times reported that Randall Coffland lived with his daughters at the condo where the murders occurred and his wife lived in an apartment elsewhere. “Two 9 mm handguns were found in the condo. One was found near Randall Coffland’s body; the other was in a closet. He had a firearm owner’s identification card,” the newspaper reported. 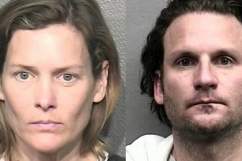 2. The Twins Were Well-Liked Students at the Local High School, Which Has Made Grief Counselors Available

The Chicago Sun-Times reports that a makeshift memorial has sprouted up outside the family’s condo that is festooned with “flowers, candles, Teddy bears and handwritten notes.”

A friend wrote on a GoFundMe site established to help Anjum, “Brittany and Tiffany were some of the brightest girls I’ve ever met. I can honestly say that they both changed my life. They were both so caring and always put others above themselves. Brittany never failed to put a giant smile on my face and she always made me feel so beautiful. She was so passionate about music and everything else she did. I remember riding bikes and getting ice cream with her in downtown Oswego all the time. When she was in poms, I never missed a game. I loved watching her perform. Whenever she saw me she would say ‘aloha!’ She was my bestest of friends and I loved her more than she’ll ever know. Tiffany always made me laugh and her love for everything she did was powerful.”

Tiffany and Brittany were juniors at St. Charles East High School, the newspaper reported. Brittany was a cheerleader, and Tiffany worked at a pet store, Patch reported. One of the twins, Brittany, had confided in friends at school that her family life was troubled, according to the Sun-Times.

Remembering our One Direction obsession and your endless kindness. My heart goes out to the Coffland family❤️ pic.twitter.com/4D2GZCU2gh

“No one believes it,” a fellow student told the Sun-Times. “Everyone’s in shock. Monday’s going to be hard at school.” The newspaper reported that the school has made grief counselors available.

3. The Shootings Took Place Inside a Luxury Condo & Police Received Horrific 911 Calls From the Father & Mother

At St Charles river fest. Awesome day had so much fun. pic.twitter.com/vWU4GfKMXZ

According to CBS News, police received a 911 call from someone inside the luxury condominium around 5 p.m. March 10. It was Randall Coffland, informing them of the shootings.

You can listen here to that call and others:

After saying he had killed his daughters and shot his wife, Coffland gave police his address and then said, “I’m going to kill myself now too. My two girls are dead, and I’m killing myself,” he says. You can listen to the chilling 911 call at the Patch website.

“Come here now! Oh my God, my husband shot my kids!” Anjum said in the call, screaming, “My daughters are dead!” You can listen to that call here. And here:

Police said they found one teenager dead on the sofa and the other in a bedroom, according to Patch.

4. The Mother Is in Stable Condition & Works as a Claims Adjuster

She lists her previous job as deputy recorder for Kendall County in Illinois. She is fluent in Urdu and previously worked as a special education paraprofessional.

Anjum sometimes posted about her daughters on social media.

My daughter met her hero for the 7th time today, I'm so happy for her bc I know he means the world to her:) pic.twitter.com/kWvlFd71HN

Anjum, the only member of her family to survive, was in stable condition at the hospital on March 12.

5. Randall Coffland Worked as a Network Manager in Illinois

Randall Coffland’s profile on LinkedIn says that he worked as a network manager for Much Shelist PC in the Chicago area.

His profile says that he is “a veteran hands on IT Manager who enthusiastically learns new technologies. Though my background is in the Windows / VMware arena, my other interests over the last couple of years have included Linux (CentOS / Red Hat), Cloud based infrastructures (AWS, Azure) and automation tools (Chef, DSC). Though I consider myself a “hands-on” manager with a large technical skill set, I also enjoy leading and directing the IT Department and setting the overall vision and strategy.”

He’s a graduate of DeVry and the College of DuPage.