A man receives a cross of black ashes on his forehead on Ash Wednesday at St. Patrick’s Cathedral on February 13, 2013 in New York City.(Photo by John Moore/Getty Images)

Ash Wednesday is the start of the Lenten season that leads to Easter for Christians. On Ash Wednesday, Catholics and other Christians have ashes placed on the forehead. Ash Wednesday follows Mardi Gras, or Fat Tuesday, which is the end of Carnival.

Learn more about the origins and history of Ash Wednesday and Lent below!

1. They Both Have Pagan Origins

Both the imposition of the ashes and Lent are deeply rooted in pre-Christian traditions and religions.

The practice of putting ashes on one’s forehead has been known since ancient times. This is proven with Matthew 6:16, where Jesus tells his followers to not “disfigure” their faces with ash as they fast but to wash their faces with oil and water instead. Jesus says:

“When you fast, do not look somber as the hypocrites do, for they disfigure their faces to show others they are fasting. Truly I tell you, they have received their reward in full. But when you fast, put oil on your head and wash your face, so that it will not be obvious to others that you are fasting, but only to your Father, who is unseen; and your Father, who sees what is done in secret, will reward you.”

This may be a reference to ashes being considered pagan. However, ashes used as a symbol for repentance are also mentioned in the Jewish Old Testament, including in 2 Samuel 13:19, Job 42:3–6, and more.

The Beacon of Truth adds:

In the Nordic pagan religion, placing ashes above one’s brow was believed to ensure the protection of the Norse god, Odin. This practice spread to Europe during the Vikings conquests. This laying on of ashes was done on Wednesday, the day named for Odin… The Norse practice which has become known as Ash Wednesday was itself, drawn from the Vedic Indian religion. Ashes were believed to be the seed Agni, the Indian fire god. Ashes were also believed to be symbolic for the purifying blood of the Vedic god Shiva, which it is said had the power to cleanse sins.

The Viking age lasted from the late 8th century to the mid 11th century and had significant cultural effects on Europe, particularly the western portion. However, Vikings did also have significant holdings in modern Italy, the seat of Catholic Christendom.

Lent also has connections to pre-Christian traditions. According to English scholar John Landseer in his Sabean Researches (1823), ancient Egyptians held an annual fast of 40-days in honor of their god Osiris, ruler of the underworld.

Christmas was really a spin-off of Saturnalia and other similar pagan holidays, and the date was chosen to help early pagans ease into the religious transition of monotheistic Christianity.

Lupercalia was a very ancient, possibly pre-Roman, pastoral festival observed in pre-Christian Rome on February 15. The holiday would feature the sacrifice of goats and a dog under the supervision of Zeus’ chief priest. The sacrifices were intended to purify the city and promote fertility for the coming lambing season. According to The Lupercalia, the festival later incorporated aspects from another pagan holidaty called Februa, which is where the month of February gets its name.

Like Saturnalia, aspects of Lupercalia were incorporated into early Christian holidays to help in the conversion of Romans.

2. In Modern Times, Ash Wednesday Is a Time of Repentance

Madeleine Zohn, who has been attending St. Patrick’s for 55 years, worships during Mass on Ash Wednesday at St. Patrick’s Cathedral on February 18, 2015 in New York City. (Andrew Burton/Getty Images)

For modern Christians, the inspiration for Ash Wednesday is drawn from two Bible verses, Genesis 3:19 and Mark 1:15. Genesis 3:19 reads:

By the sweat of your brow you will eat your food until you return to the ground, since from it you were taken; for dust you are and to dust you will return.

“The time has come,” he said. “The kingdom of God has come near. Repent and believe the good news!”

Either of the bolded phrases is commonly uttered to Christians as they receive the imposition of the ashes. However, having a cross drawn on one’s forehead with ash is common mostly only in English-speaking countries. In other countries, ashes are merely sprinkled over one’s head.

Jesus is also quoted as speaking of the practice of using ashes as a symbol of repentance in Matthew 11:21 and Luke 10:13, saying, “Woe to you, Chorazin! Woe to you, Bethsaida! For if the miracles that were performed in you had been performed in Tyre and Sidon, they would have repented long ago in sackcloth and ashes…”

Since then, Christians have continued the practice of using ashes as a physical sign of repentance.

3. In Modern Times, Lent Is a Time of Reflecting

Indian Christians and members of the augmented choir of twin cities sing choral music during the season of Lent at Church of Saint John Baptist in Secunderabad, the twin city of Hyderabad on March 18, 2016. (NOAH SEELAM/AFP/Getty Images)

“Lent” is an Old English that means “length,” referencing the lengthening of daylight hours for the coming spring, according to Dictionary.com. The name is of stark contrast to the Latin name for Lent, “Quadragesima,” which means “fortieth.”

Lent is traditionally described as lasting 40 fasting days and commemorates the forty days Jesus spent fasting in the desert prior to beginning his public ministry. While in the desert, Jesus endured temptation by Satan. The story is told in the Gospels of Matthew, Mark, and Luke.

However, the number “40” occurs many times in the Bible, including the 40 days Moses spent on Mount Sinai with God, the 40 days and nights of rain in the great flood survived by Noah, the 40 years of wandering by the Hebrew people in the desert while traveling to the Promised Land, and many more.

Lent is viewed as a time of introspection and prayer to bring oneself nearer to God.

4. What do People Give Up for Lent?

Pope Francis prays in front of the statue of the Immaculate Conceptionon at Spanish Steps December 8, 2013 in Rome, Italy. (Franco Origlia/Getty Images)

During Lent, many Christians choose to “give up” a vice they struggle with as a symbol of sacrifice. Among Roman Catholics, some observers abstain from the consumption of meat.

According to Christianity Today, only 24% of Americans observe Lent, with Catholics being the most common observants.

Common Lent fasts include no soda, no fast food, no chocolate, and no sex, but according to a Twitter poll conducted by LifeWay Research, the #1 thing people give up for Lent nowadays is social media.

Easter is considered the most important holiday on the Christian calendar. It is the day believed to be when Jesus Christ rose from the dead after being crucified. It follows Palm Sunday, which is April 9, Maundy Thursday, April 13, and Good Friday, April 14.

Like Mardi Gras, Ash Wednesday, and Lent, Easter was also affected by early Christian pagan customs, such as the Easter egg and the Easter Bunny. In fact, according to the Online Etymology Dictionary, Easter is a German word derived from Eastre, the name of a goddess associated with spring.

Read more about Ash Wednesday in Spanish at AhoraMismo.com: 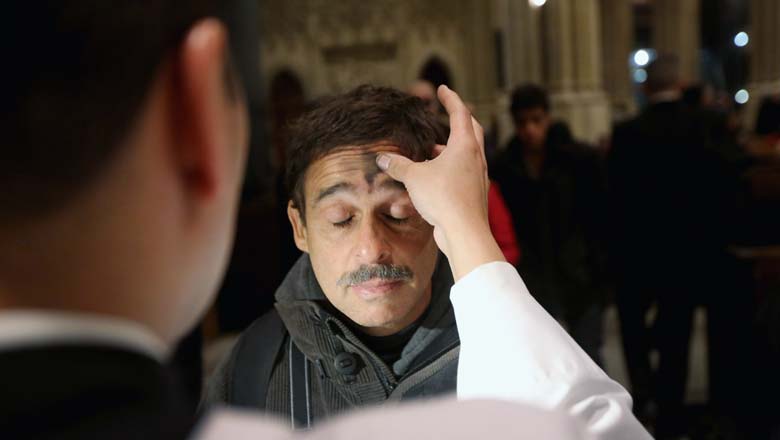 Loading more stories
wpDiscuz
7
0
Would love your thoughts, please comment.x
()
x
| Reply
Ash Wednesday is the start of the Lenten season that leads to Easter for Christians. On Ash Wednesday, Catholics and other Christians have ashes placed on the forehead.