At least four people are dead after a train in Biloxi, Mississippi struck and dragged a charter bus carrying about 50 people traveling from a senior center Tuesday, March 7. The incident caused at least 34 additional injuries, the Sun Herald reported.

The Sun Herald reported that four people declined medical treatment, three died at the scene and a fourth died later. Among those injured, 10 are reportedly listed in critical condition while another 10 are in serious condition.

The bus was reportedly traveling from Austin, Texas through Biloxi on Main Street when it attempted to cross over the train tracks, but got stuck and was hit by the train.

The senior citizens were on the bus from Bastrop Senior Center, located in Bastrop, Texas. The center confirmed it was their bus at a press conference later in the day.

Barbara Adkins at the senior center said that 27 members of the center were on the bus and the rest of the victims were family members. Adkins said that the center typically uses the same bus company for its trips and some of them were in an accident on a bus trip previously.

Here are some photos and videos from the horrific scene:

A train has collided with a charter bus in Biloxi. Several crews are on site working to rescue those on board. pic.twitter.com/picrzz7bCM

HAPPENING NOW: Rescue workers in Biloxi, MS arrive at the scene of a train and bus accident where at least 3 are dead; 50 injured pic.twitter.com/Toko11U9WV

Here is another image @JFitzhughPhoto took at the scene of a bus/train accident today in Biloxi. Latest here: https://t.co/qmnK0v5StZ pic.twitter.com/33RsVfTUMD 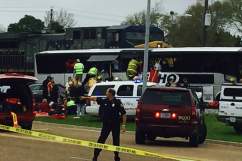 Loading more stories
wpDiscuz
0
0
Would love your thoughts, please comment.x
()
x
| Reply
A train struck a bus in Biloxi, Mississippi on March 7. It caused at least four deaths and at least 34 injuries. See the pictures and videos from the scene.