A 19-year-old reported gang member is in Miami-Dade police custody after allegedly shooting two undercover police officers during an ambush.

Damian Antwan “Damo” Thompson was charged with two counts of attempted murder, battery on a police officer and resisting arrest with violence after being questioned by police following the shooting which resulted in one officer being shot in the leg and the other being grazed by a bullet, The Miami Herald reported. Both officers were treated at a nearby hospital and survived the shootout.

He and three others — one male and two females — were also arrested in connection with the police shooting.

BREAKING: @MiamiDadePD announce 3 more arrests in connection to the shooting of 2 detectives. A total of 4 ppl now in custody. @wsvn pic.twitter.com/EdSVoZLpAP

Here’s what you need to know about Thompson and the shooting:

1. The Cops Were Working Undercover When Thompson & Others Allegedly Ambushed Them

The two veteran police officers, detective Charles Woods and Terance White, were sitting in an unmarked police minivan conducting surveillance on gang activity in the area when they were approached by a group of people.

At least one member of the group suddenly opened fire on the minivan and at least one officer returned fire, CBS Miami wrote.

Other officers quickly responded to the scene in large numbers as a manhunt was underway. Woods and White were both then transported to hospital in the bed of a pick-up truck.

Woods was shot in the leg while White was grazed by the bullet in the arm, reports say.

At least one of the wounded officers has since been released from the hospital. 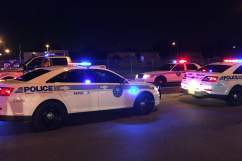 2. Thompson Allegedly Shot Up the Van With an Assault Rifle, Striking & Wounding the 2 Officers 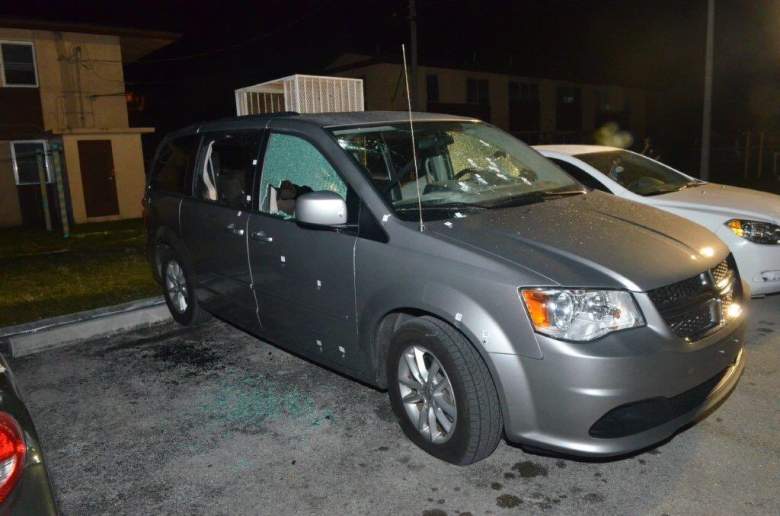 The minivan that was allegedly shot by Thompson (Twitter)

Authorities say that as the two officers called for backup, one of the men pulled out what looked to be an AK47 assault rifle and continuously opened fire on the van, moving closer to the vehicle as he did so.

Thompson, the lone alleged shooter in the group, began firing at the passenger side of the car and worked his way toward the front and then the drivers side before fleeing.

In the middle of the chaos, at least one of the officers returned fire at the group and busted out the windshield. It’s currently unknown if Thompson or any other of the suspects were hit by the return fire. The car was lit up with over 20 rounds of gunfire.

3. Thompson, a Suspected Gang Member, Told Officers He Was Going to Kill Them Prior to His Arrest

Thompson has a history of run-ins with law enforcement recently. He’s also a suspected associated with the Miami gang called the 13th Avenue Hot Boyz.

He was taken into custody by police who were acting on a tip March 28. They apprehended him at a hotel near Miami International Airport on a search warrant and had a scuffle when trying to place him in handcuffs.

According to an arrest report seen by The Miami Herald, Thompson “hid underneath bed sheets and fought with officers.”

When the officers tried to arrest him, Thompson allegedly said, “I’m going to kill both of ya’ll.”

The officers used force against Thompson, “continuing to strike” him so that they could “gain compliance” and handcuff him, the report said.

The officers involved in the shooting identified Thompson as the shooter in a lineup of suspects. He spent most of Tuesday being questioned by detectives before officially being charged with the attempted murder and battery counts Wednesday morning.

A law enforcement source told The Miami Herald that Thompson didn’t confess to being the shooter, but told authorities that he “knew” detective White.

4. Charges Against Thompson For Crack Cocaine Possession Were Dropped

Thompson was familiar to Miami-Dade police, as he’d been arrested by them before.

In November 2016, Thompson was arrested for possession of cocaine with intent to distribute, reports say.

The Miami Herald wrote that the arrest report following the incident stated that an officer witnessed Thompson drop multiple bags of crack cocaine on the corner of NW 62nd Street and 12th Parkway in Liberty Square.

Thompson was arrested, but told police that he wasn’t trying to sell anything, rather he found the bags of crack cocaine on the ground at a nearby housing project and picked them up out of curiosity.

Charges were never pursued against Thompson and the case ended up being dropped altogether.

5. Thompson Was Arrested In January During a Parade By White

Coincidentally, one of the times Thompson was arrested was by White.

He was taken in by officers just months ago in January during a Martin Luther King Jr. Day parade on the streets in Miami.

During that arrest, The Miami Herald reports that a plainclothes officer, later discovered to be White, received a tip that someone that was wanted by police was in a nearby courtyard of an apartment on Brownsville.

The search warrant states that White arrived at the courtyard and approached a group of people. When Thompson noticed White approaching, he took off and ran away from the scene, dropping a gun from his waistband while doing so.

Another officer at the scene was able to detain Thompson and place him under arrest as White picked up Thompson’s weapon, which was later discovered to be a 9mm Glock handgun.

He was set to appear to court for carrying a concealed weapon June 12.