A Dayton bus driver helped talk a woman off of the ledge of a bridge, keeping her calm until police arrived, city officials say. Video of the dramatic moment, which you can watch above, was captured on surveillance cameras inside the bus.

Damone Hudson has been a river for the Greater Dayton RTA for 24 years. On February 16, he saw a woman who appeared to be ready to jump off a bridge on Main Street in downtown Dayton.

Police said his quick actions helped save the woman’s life.

“I just knew I needed to talk to her,” Hudson said in a statement released by the RTA. “I wasn’t trying to be heroic, I just saw someone that looked like she was definitely in pain or trouble and I just wanted to make a connection.”

The video shows Hudson stopping his bus near the woman, who can be seen standing on the ledge of the bridge with her backpack in her hand, facing toward the Great Miami River below.

Damone “D” Hudson has been an RTA driver for 24 years. Earlier this month, he stopped a woman from jumping a downtown bridge. pic.twitter.com/NkFvhOHoEQ

Hudson said, “I went up to her and just started talking, I asked her if she wanted a hug.”

According to the RTA, Hudson continued talking to the woman while motioning for another passerby to call police. Dayton Police arrived minutes later and Hudson let officers take over. The woman was eventually helped back over the railing to safety, officials said.

The RTA said Hudson will be honored for his “swift action” at its upcoming board meeting on March 7.

Hudson told WHIO-TV, “Everyone’s going through something. Even if you are, just reach out and try to touch someone, even if it’s in a small way.”

Police told the news station Hudson did the right thing.

“There is not a right or wrong approach to that,” Dayton police detective Patty Tackett told WHIO, saying its about drawing from personal experiences and knowledge in those moments. “He did a great job, and again I think it goes with our gut instincts.”

Jason Allen, of the RTA, told WHIO that Hudson is “one of the best bus drivers we have.”

Hudson told the news station the incident had a big impact on him.

“I know that every person’s struggle is different and everybody’s going through something, but you always want to continue,” Hudson said. “Life is a roller coaster, right? You to up, you’re going to come down. But you’ve got to think ‘I’m going back up’ and hopefully it’s going up for her now.”

If you need help or are thinking about suicide, call the national Suicide Prevention Lifeline at 800-273-TALK (8255) or visit suicidepreventionlifeline.org. 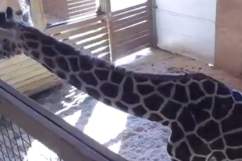 Read More
Breaking News, Ohio, Video
wpDiscuz
1
0
Would love your thoughts, please comment.x
()
x
| Reply
Damone Hudson, a bus driver for RTA in Dayton, Ohio, helped talk a suicidal woman off the ledge of a bridge. Video of the incident was caught on surveillance cameras.