Dozens of rallies to show support for President Donald Trump took place across the nation Saturday.

From California to Indiana to New York, supporters took to the streets to voice their positive opinion on the Trump administration in the Make America Great Again March.

But some of those rallies were met with droves of counter-protesters, many of whom clashed with the pro-Trump groups.

In Philadelphia, a large counter-protest was planned with the motive of “chasing” the Trump supporters out of town, according to Philly Voice.

The demonstration was called #DisruptMAGA, in direct response to the Make America Great Again rally. In the event description, #DisruptMAGA organizers asked the protesters to “protect your identity” and said they didn’t welcome “people who seek to restrict the actions of other demonstrators.”

Let’s show them that Philly knows the truth. That America was founded on Colonialism, Genocide, Slavery and Sexism. Those traditions continue today, though sometimes in varied forms. America was never great. But Philly can be great on March 25th. Let our rage send a message to all those who think the election of Trump means that we will lie down and die, and all those unsure how to best stand against Trump and his minions. #DisruptMAGA welcomes and encourages a diversity of tactics. However, “peace police,” people who collaborate with law enforcement, and people who seek to restrict the actions of other demonstrators are not welcome. Be smart; this is not a civil disobedience where everyone tries to get arrested or injured. Come with a buddy, protect your identity and watch your back.

The Philadelphia event was just one instance of planned counter-protests across the nation in response to the MAGA March rallies.

Here are some photos and videos from the chaotic scenes across the nation:

Violence erupts at rally when supporters and protestors of Trump collide. #MAGAMARCH in Huntington Beach. pic.twitter.com/K1VTH20hO4

Watch this @PhillyPolice officer hit this protester with his bike out of nowhere pic.twitter.com/uZ3Qt91FkH

Hundreds of People on Bikes Took to the Streets In Philadelphia

Tasers, insults, and shoves from the #MAGAmarch as they push through the anti-Trump protest. pic.twitter.com/pLx2OoOD7a

Injuries Were Reported In Lincoln, Nebraska

Last of protesters dispersed after this. Talk of a few injuries pic.twitter.com/W5qkFqJUR6

Hundreds of Supporters Banded Together In Some MAGA March Locations 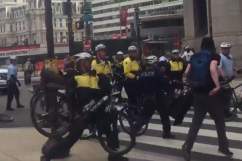 Read More
Donald Trump, Protests, Videos
Rallies to show support for President Donald Trump took place across the nation March 25. But some were met with violent protest. See the videos and photos.