President Donald Trump sent out a statement shortly before Rachel Maddow‘s report on MSNBC about Trump’s tax returns. Trump called the network “desperate for ratings” because Maddow only obtained tax returns from a single year, 2005.

“You know you are desperate for ratings when you are willing to violate the law to push a story about two pages of tax returns from over a decade ago. Before being elected president, Mr. Trump was one of the most successful businessmen in the world with a responsibility to his company, his family and his employees to pay no more tax than legally required. That being said, Mr. Trump paid $38 million even after taking into account large-scale depreciation for construction, on an income of more than $150 million, as well as paying tens of millions of dollars in other taxes, such as sales and excise taxes and unemployment taxes, and this illegally published return proves just that. Despite this substantial income figure and tax paid, it is totally illegal to steal and publish tax returns. The dishonest media can continue to make this part of their agenda, while the President will focus on his, which includes tax reform that will benefit all Americans.”

Trump later called Maddow’s report “Fake News,” even though the White House confirmed that the tax returns she obtained were real.

Does anybody really believe that a reporter, who nobody ever heard of, "went to his mailbox" and found my tax returns? @NBCNews FAKE NEWS!

Maddow teased that she obtained Trump’s tax returns and will have author David Clay Johnston on the show to talk about them. However, she later revealed that the network obtained Trump’s 1040 form from just 2005. The White House later confirmed that Trump paid $30 million “even after taking into account large scale depreciation for construction” on a $150 million income.

Maddow also inadvertently disproved a New York Times report from October 2016 that noted that Trump could have avoided paying taxes for the past two decades. The Times reported at the time that Trump declared a $916 million loss on his 1995 income tax returns, which would have allowed him to use a loophole to avoid paying federal income taxes. But the document Maddow obtained and the White House’s subsequent statement proves that he really did pay taxes – at least once – since 1995.

Deadline reported that Maddow actually does well in the ratings, with 2.62 million viewers in the wee of March 6. It was her best showing in the 25-54 demographic since October 2008. 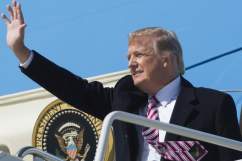