Dr. Seuss – the beloved children’s author known for his whimsical rhymes – would have turned 113-years-old on March 2.

Dr. Seuss was the pen name of Theodor Geisel. His birthday is also designated as “Read Across America Day, where children all over the country celebrate their love of reading and learning,” according to ABC7.

Schools across the United States celebrated Dr. Seuss’ legacy, as schoolchildren and teachers dressed up in Dr. Seussian outfits and read the author’s books.

Among his most famous book was The Cat in the Hat. ABC 7 reported he wrote that book because he was worried children weren’t able to read. Other Seuss books like Green Eggs and Ham are iconic reads. According to Biography.com, Dr. Seuss was born on March 2, 1904, in Springfield, Massachusetts. His first children’s book using that nom de plume was And to Think That I Saw It on Mulberry Street in 1937, reported Biography.com.

Geisel, who was also a cartoonist, died on September 24, 1991, at 87, in California, Biography.com reported.

Here some of the best quotes to remember the beloved author. In addition to their rhyming and simplicity, Seuss quotes are known for being uplifting. Most Americans immediately recognize their distinctive cadence as Dr. Seuss.

A few words of wisdom from #DrSeuss. Happy #DrSeussDay!! pic.twitter.com/dznPDmzX6c

A big thank you to those of you who went to the elementary schools to read today! Happy Dr.Seuss Day? pic.twitter.com/4FIuR00rMt

Favorite #DrSeuss quote: You have to be odd to be #1
Also: Why fit in when you were born to stand out pic.twitter.com/fCQAE0xrWt https://t.co/1UMSSZ4UvW

Happy birthday #DrSeuss–who made it fun despite the weather! pic.twitter.com/6gFwwmmEtT

Roll in and have a bit of fun with the kids on Dr. Seuss's birthday! pic.twitter.com/iqryQbdpN3

AS DR. SEUSS SAID, “Teeth are always in style.” We couldn’t agree more!
In honor of Dr. Suess Day please make yo… pic.twitter.com/eGMsVEeyRV

Dr. Seuss’ widow, Audrey, his second wife, is still alive and is 94, although Geisel did not have any children of his own. She runs his estate, including making licensing decisions. You can read about Dr. Seuss’ second wife here: 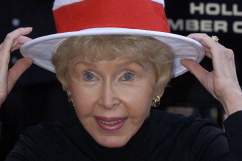