El Hadji Alpha Madiou Toure is accused in the murder of visiting Washington D.C. artist Corrina Mehiel, who was working on an exhibit to combat childhood lead poisoning.

The 34-year-old North Carolinian – known for her interest in social justice – was found bound and stabbed to death inside an apartment where she was staying while visiting the nation’s capital.

1. Toure Was Arrested in Tennessee on a Probation Violation & Was Staying in D.C. Shelters

Toure, 28, was arrested on March 28 and “charged with first-degree murder while armed and theft one,” according to Washington 4.

Police have not revealed a motive, but the chief said in a news conference that police do not believe Mehiel and Toure knew each other. He has no fixed address. According to Fox 5, Toure was initially arrested “on an outstanding warrant charge in another jurisdiction.”

Police had said previously that they didn’t think the crime was random because there was no sign of forced entry.

In a press conference, the police chief said police “received numerous tips from the community” that led to Toure’s arrest in Bradley County, Tennessee. “We could not have solved this case without the support of our community,” the chief said, adding that police have no information to suggest that Mehiel was sexually assaulted.

2. Police Previously Released Surveillance Video & a Photo of the Suspect

According to Fox 5, early on in the case, police released a surveillance video and photo from it of the person of interest. The police chief said the photo and video were of Toure. 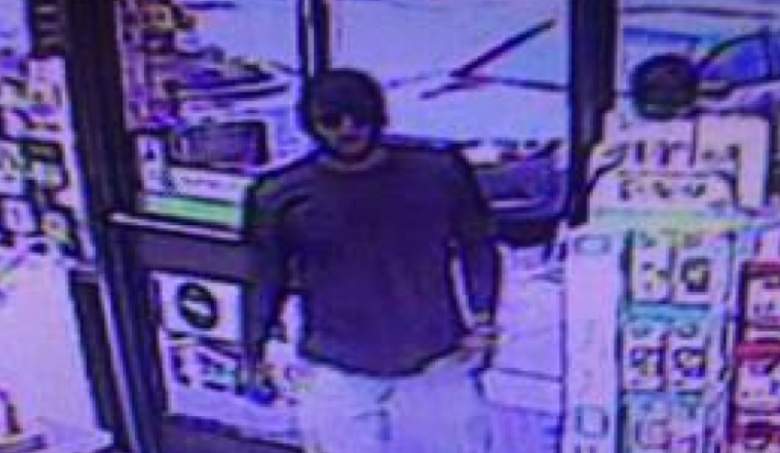 The suspect in the murder of Corrina Mehiel. (surveillance video)

The photo police previously released of the person of interest in the Corrina Mehiel murder. (police photo)

Police provided a description of “Mehiel’s missing blue 2004 Toyota Prius with Kentucky tag 722 RMY that was captured on a traffic camera,” Fox 5 reported.

3. Mehiel Was Visiting D.C. For an Art Exhibit on Childhood Lead Poisoning

According to The Washington Post, Mehiel was in Washington D.C. to help curate an art exhibit at the Corcoran School of the Arts and Design.

Mehiel was working “with well-known artist Mel Chin on a Corcoran exhibit called ‘The ­Fundred Reserve'” which “consists of hand-drawn $100 bills that visitors create and are used to highlight the dangers of lead poisoning,” The Post reported, adding that she attended an artists’ dinner shortly before she was murdered.

Mehiel was the executive director of Danzante, a Pennsylvania non-profit organization, from 2008 to 2010, PennLive reports.

Her exhibitions were remembered for their creativity and social activism; The Washington Post said of one: “Mehiel ‘fixed’ bikes that had been abandoned on racks on city streets, turning them into public sculptures by replacing their missing parts with colorful nonfunctioning pieces, some that she painted by hand.”

4. Mehiel Was Stabbed Multiple Times in a D.C. Row Home

Mehiel’s body was found in the D.C. home she was staying in. She had been stabbed and was bound.

According to DC 5, Mehiel was unconscious and had multiple stab wounds when found. Police had offered a reward in her case: 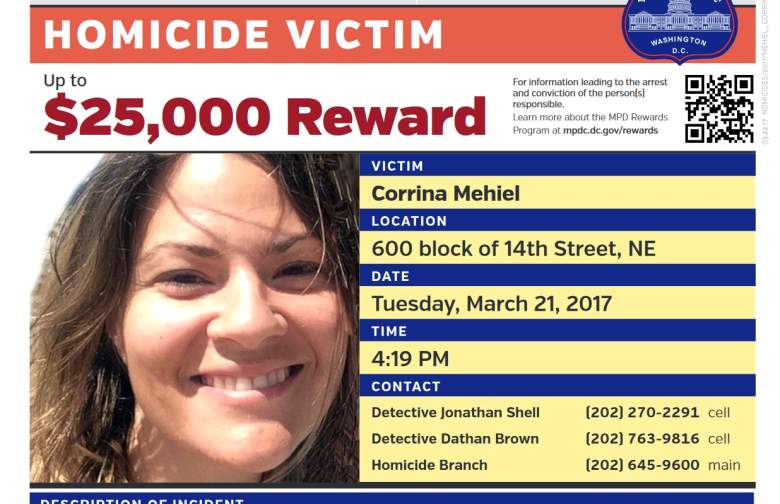 The Washington Post reported that Mehiel had rented a basement apartment in a row house “along the edge of one of the District’s most affluent neighborhoods” and was found tied up.

The body of artist Corinna Mehiel has been discovered on Capitol Hill, Washington, D.C. https://t.co/Kc5LjyT6lx #ArtNewsDaily

Chin, the artist working with Mehiel on the art exhibit, told The Washington Post that he didn’t recognize the suspect and the murder had left Mehiel’s associates “deeply unsettled.”

House Democratic Leader Nancy Pelosi attended a reception for the Mehiel art exhibit on March 10, according to Mehiel’s Facebook page.

We are grieving the loss of Corrina Mehiel, an integral part of the Fundred Team, and resolve to move forward in the spirit she practiced. pic.twitter.com/8TJcvvdzNX

Mehiel frequently posted about politics on social media, often opposition to President Donald Trump. She wrote shortly after the election:

I looked up to the women in my life. I loved how the women I was around were caring and nurturing. My Mom spent a lot of time talking to me about my worth, how to find a path toward loving myself, loving others, and being loved. Hillary Rodham Clinton was a part of that narrative. My Mom literally required me to read ‘It takes a Village’ so that I could discuss it with her when I was in high school as to understand the relationship between community and education…

This year has been exciting and terrifying. So many tragedies inflicted on the full spectrum of non-white males in my country. I have spent many days trying to understand this moment in our history. Feeling so proud of what we have all accomplished. Sobbing with the country at the death of the young, beautiful people in Orlando. Crying to my father after watching Philando Castile pass in real time in front of the whole world. His strong and beautiful girlfriend having the strength to show that story to an already grieving country. And through it all watching the way the women in my life spent the year in worried apprehension. Trying to be excited for the future, and all the while listening as the people in our lives rallied around chants of hate and fear toward people of color, people of other religions, people of the lesser sex, people who don’t check one gender box.

She also wrote about her art:

I’ve spent a whole lot of time and energy in my life trying to understand and “become” an artist. Whatever that means. I have had some moments of clarity and will continue to embrace that aspect of my identity, and continue to try to use my visual language to communicate ideas of healing and peace.

Mehiel’s stepmother described her as “full of life, full of plans” and said she had spoken with her father that night, Washington 4 reported.

Mehiel’s website says she “received her MFA from the University of Cincinnati and a BA from The Pennsylvania State University. She has exhibited nationally and abroad, and presented papers on her research at the College Art Association Annual Conference, and the Perspectives on Arts Ed Research in Dusseldorf, Germany.”

Her website lists many curations and exhibitions. According to Facebook, she was also a participant in the recent Women’s March in Washington.