A 13-year-old girl filmed the scene as immigration officials took her undocumented immigrant father away in a black car while he was taking her to school.

You can watch the video made by Fatima Avelica above. The video captures the girl sobbing as officials take her father away. According to ABC 7, Romulo Avelica-Gonzalez, 48, “had been in the country for 20 years with four children, two of whom are grown.”

Fatima told CNN, “I was scared and sad at the same time. I never thought I would have to experience something like this in my life … on my way to school.”

According to ABC 7, ICE released the following statement:

Officers with one of U.S. Immigration and Customs Enforcement’s (ICE) Los Angeles-based Fugitive Operations teams took Mr. Avelica into custody Tuesday morning. Mr. Avelica was targeted for arrest because relevant databases indicate he has multiple prior criminal convictions, including a DUI in 2009, as well an outstanding order of removal dating back to 2014. After conducting surveillance to confirm his identity, the officers arrested Mr. Avelica during a vehicle stop in the 3200 block of Pasadena Avenue, approximately a half mile from the charter school described in the related social media post. No one else was detained during the vehicle stop. Mr. Avelica remains in ICE custody at this time.

However, Ricardo Mireles, charter school Academia Avance executive director, told KABC-TV that “Avelica’s DUI conviction occurred nearly a decade ago and another run-in with the law came 20 years ago after Avelica said he unknowingly purchased a car with an incorrect registration sticker.”

In the video, one of the officers approaches the car and speaks in Spanish. His comments were mostly procedural, providing the family with a phone number they could call to get more information.

The video came just days after a 22-year-old undocumented immigrant, Daniela Vargas, was detained by ICE after delivering a speech at an immigration rally. Learn more about her story here: 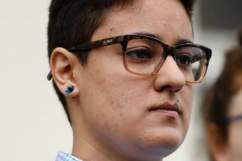 Read More
Breaking News, California, Donald Trump, illegal immigration
Fatima Avelica, 13, filmed a video of ICE agents detaining her father, Romulo Avelica-Gonzalez, as he took her to school. He is an undocumented immigrant.