Hours after a protest which ended with shots being fired, St. Louis County prosecutor Bob McCulloch released unedited footage from Ferguson Market and Liquor. The video shows the moments before Michael Brown was shot and killed by a white police officer August 9, 2014.

The surveillance video can be seen above in its entirety, courtesy of the St. Louis Post-Dispatch. The 17-minute video is part one of five parts. Click here to view parts two, three, four and five.

The footage from Ferguson Market appears to show that there was no deal that was made at the store in the hours before a scuffle ensued when Brown came back for cigarillos.

The “unedited” video was released March 13 because McCulloch and the owners of Ferguson Market were responding to new footage by documentary film maker Jason Pollock.

A new movie directed by Pollock, Stranger Fruit, includes surveillance video from the store that the public hasn’t seen before.

The video from Pollock shows Brown at the store the evening before he got into an altercation with an employee. Pollock claims the new video doesn’t line up with the Ferguson police account, which allege the 18-year-old Brown committed a robbery. Instead, Pollock argues that Brown dropped off a baggie — presumably of marijuana — the night before in exchange for a pack of cigarillos. He walks toward the door, but turns back and asks the cashier to hold the tobacco product behind the counter for safekeeping, Pollock said.

Hours later, Brown arrived back at the store and is seen getting into an altercation with a Ferguson Market employee. Stranger Fruit debuted at SXSW Festival in Austin, Texas on March 11.

But McCulloch said in a press conference March 13 that Pollock’s video is “heavily” edited and “pathetic.” He added that it was not relevant in the case.

McCulloch said "pathetic" video is "neither relevant nor material to anything" at #Ferguson Market later in day or on Canfield Drive. https://t.co/xFuoxJyTTP

A couple hours later, Ferguson Market attorney Jay Kanzler displayed the “unedited” footage to media members. He said that the video used in Stranger Fruit takes a four-minute conversation between Brown and an employee and edits it down to seconds of footage.

.@FOX2now: Jay Kanzler (representing Ferguson market): "What the filmmaker did is edit down a 4 minute interaction into about 20 seconds." pic.twitter.com/rOoVsUJUx7

McCulloch called Pollock’s video a “pretty pathetic attempt at a video production” and added that it was “clear” no transaction was ever made between Brown and the store’s employees.

This is a clear attempt to distort this and turn it into something it isn’t…There was no transaction, but there certainly was an attempt to barter for these goods, but the store employees had no involvement in that, and when he left, they put everything where it belonged…It’s very clear there was no transaction between Mr. Brown and the store employees and to suggest he’s coming back to get what he bartered for is just stupid.

It was reaction to the video from Pollock’s documentary that started protests and led to several arrests and shots being fired outside of Ferguson Market on March 12. A police car was nearly set on fire as a result of the incident, St. Louis Post-Dispatch photographer David Carson tweeted.

Someone thought about trying to set a cop car on fire during the at times chaotic protest at the Ferguson Market Sun https://t.co/pwgiehscjT pic.twitter.com/tyCcXGdg5u 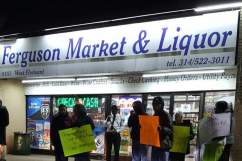