BREAKING:
First photos of moments before head-on bus crash
Truck swerving all over US 83.@SueKENS5 has video. More details at 6pm on @KENS5 pic.twitter.com/YvfOQOthuO

A 20-year-old man is accused of driving his pickup truck recklessly – while possibly texting and driving – before veering into a minibus carrying a group of New Braunfels seniors back from a church choir retreat.

Jack Dillon Young was identified as the driver who crashed into the seniors’ bus, killing 13 people on March 29 along a Texas roadway. All but one of the seniors inside the bus died; Young survived the crash and is recovering in a hospital.

There are new reports that Young may have repeatedly apologized for texting and driving in the moments after the crash, and police say they received three 911 calls reporting reckless driving before the accident. No criminal charges have been issued, however.

An eyewitness recorded a lengthy video he says is of Young swerving back and forth in the road shortly before the accident. You can watch it here. “This guy is all over the road,” the witness says as his passenger expressed repeated horror.

Four of the victims in the Texas church bus crash. (Facebook)

The victims ranged from a woman who made band folders for the church choir to a retiree remembered for her love of square dancing. Loved ones remembered the strong faith of many of the victims. The daughter of victim Murray Barrett, who was driving the minibus, wrote a heartbreaking tribute to her father. It said, in part, “Yesterday my father’s death, along with the death of 12 other members of his church, shook me in a way I have never been shaken before. I love my mom, but I was always a daddy’s girl. I remember 5am coffee and coco (he had coffee; I had coco). We were both early risers and would enjoy that special time before my siblings and mom would wake up. I’d be rubbing sleep out of my eyes but dad had already been up praying and reading his bible.”

The gruesome crash occurred near Concan, Texas in the area of Garner State Park. Photos and videos captured the scene of the horrific collision.

According to News4SanAntonio, the “bus carrying seniors from the First Baptist church in New Braunfels collided with a heavy-duty pick-up truck” driven by Young.

A spokesperson from the Texas Department of Public Safety told The New York Daily News that it “appeared that Young may have crossed the center line of the highway before the crash.”

According to an eyewitness interviewed by the AP, Young may have apologized for texting and driving shortly before the crash. The National Transportation Safety Board is hoping to interview Young, CNN reported.

The AP reports that crash witness Jody Kuchler said Young “repeatedly apologized and acknowledged he had been texting while driving” and that Kuchler spoke with Young as he was “pinned his truck.” Kuchler told the AP he said to Young, “Son, do you know what you just did?” and Young repeatedly apologized. Kuchler had seen Young driving “erratically” before the crash, the AP alleged.

Young is from Leakey, Texas, the Herald-Zeitung reported. News4SanAntonio reported, “Authorities said the driver of the truck is at fault in the accident that killed 13 members of the church.”

According to the Uvalde Leader-News,”An area resident was behind one of the vehicles involved and said she called law enforcement in Uvalde and Real counties to report reckless driving. Before help arrived, however, the crash happened.”

ABC3340 reported that police had confirmed that account, writing, “Lt. Daniel Rodriguez of the Uvalde Police Department confirms they received a 911 call prior to the accident during which the caller reported a white Dodge dually was driving all over the road. Upon receiving the call, deputies were immediately dispatched, but by the time they arrived, the crash had occurred.”

According to CNN, the cause of the crash remains under investigation, however.

The Associated Press reported that the seniors were about 120 miles from the church, where they were headed, when the crash occurred. 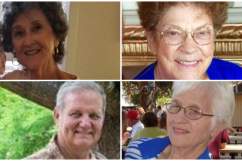 2. The Seniors Were Returning From a Choir Retreat & Young Lived Near the Crash Site

Young lived within 10 miles of the crash site, according to KENS5.

The television station found that neighbors were hesitant to speak of Young, although one person recalled him playing football, and he “last attended the high school in 2014 and did not graduate from Leakey.”

Records say this is the home of the p/u driver from the fatal bus crash #kens5eyewitness pic.twitter.com/YTJuckv3f9

KENS5 reported that Young lives “at the dead end of a barely-paved gravel road.”

The church, First Baptist New Braunfels, posted several messages on Facebook, which said the bus was returning from a retreat. The church asked for people’s prayers. MySanAntonio.com reported that the event was a choir retreat.

The church also posted that it was asking for prayers for Young.

“We have received word that the bus carrying our senior adults back from their retreat was involved in an accident,” the pastor wrote. “We understand there have been some fatalities. All activities for tonight are cancelled, including dinner. The Sanctuary will be open this evening for prayer and support. Please be in prayer for all involved.”

Here is another look at the crash site from the ground #kens5eyewitness pic.twitter.com/b7P1z8KovW

The church also released an official statement through social media that read, “At approximately 2 pm this afternoon, a group of our senior adults were returning home from a 3-day retreat at Alto Frio Baptist Encampment when their vehicle was involved in a head-on collision. We have heard that there have been fatalities, but we have not received any official details from the local authorities. We are ministering to family members to help them deal with this tragedy. Counselors will be on hand at the church tomorrow. If you’re a Christian, you can pray for those who lost their loved ones and for the church family.”

3. Everyone Died Inside the Church Bus but One Passenger & the Oldest Was 87

According to Fox News, 14 people were on the church bus.

The daughter of one of the victims wrote on Facebook, “As most of you know by now we lost our sweet mother in this tragic accident yesterday! We are all heartbroken! Call your mother today and tell her you love her. You never know when the last time you’ll be able to say that.”

She also posted an angry message about Young:

Rose Harris, 64, is the lone survivor of the church group. It was reported from other church members that Harris had passed away, but TWC reports she is still recovering in the hospital. Harris was upgraded to fair condition on March 30.

Other family members and friends posted tributes to the victims on Facebook. “I only personally knew one of the saints called home to glory but I grew to develop a quick bond with Sue Tysdal. Her husband, Darryl, only recently passed away,” wrote one woman. Tysdal was among those who died in the crash. “My heart goes out to all those that form the body of Christ, especially to the Tysdal family. Just last Sunday Sue and I were talking about having me over to the house for a visit with her and her son Dustyn. Christ had other plans so that visit will await us in eternity.”

At first, authorities said 12 people had died, but then they increased the number of fatalities to 13.

4. An Eyewitness Described the Crash Scene as ‘Gruesome’

Rick Ballesteros, of Uvalde, Texas, “came upon the scene of the accident,” according to Fox News. It was a horrific sight, he told Texas news media.

“It was a really gruesome scene,” he said to reporters. Videos and photos captured the mangled wreckage at the scene.

5. The Governor & a U.S. Senator Released Statements Grieving for the Victims

“We are saddened by the loss of life and our hearts go out to all those affected,” said Texas Gov. Greg Abbott in a statement.

Texas Sen. Ted Cruz tweeted, “My prayers are with the families impacted by this tragic accident – especially for those who have lost loved ones.”

Loading more stories
wpDiscuz
46
0
Would love your thoughts, please comment.x
()
x
| Reply
Jack Dillon Young was identified as the driver of a pickup truck that crashed into a church minibus, killing 13 people in Texas.