In the middle of an investigation into alleged ties between Donald Trump‘s presidential campaign and Russia, FBI Director James Comey was seen walking into the White House on Friday.

The reason for the visit was because of a regular meeting, an FBI official told NBC News’ Peter Alexander.

NEW: FBI official says Director Comey was at WH for "regular" meeting, discussing ongoing threat issues, etc. Nothing to do with Russia.

The trip to 1600 Pennsylvania Avenue comes four days after Comey testified in front of the House Intelligence Committee in relation to the ongoing investigation.

During the hearing, which lasted well over five hours, Comey confirmed that the FBI was investigating the Trump campaign and its aides for ties to Russia.

He also said that the agency has found “no evidence” supporting Trump’s claim that former President Barack Obama and his staff had Trump Tower wiretapped.

Earlier in the day Friday, it was reported that former Trump campaign chairman Paul Manafort said he would speak with the House Intelligence Committee in regard to the Russia investigation.

According to multiple reports, Manafort received millions of dollars 10 years ago from a Russian oligarch to “advance the interests” of Russia and its President Vladimir Putin.

The chairman of the House intel committee Devin Nunes (R-California) said Thursday that Manafort’s lawyer offered for his client to come forward and answer questions about his foreign ties.

“We thank Mr. Manafort for volunteering and encourage others with knowledge of these issues to voluntarily interview with the committee,” Nunes said to reporters.

No formal meeting date has been set yet between the two. 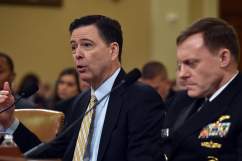