Former Vice President Joe Biden spoke at the South By Southwest (SXSW) event in Austin, Texas on March 12, focusing mostly on his plans to end cancer. He told the crowd that fighting cancer is a bipartisan effort and he’ll even work with the current president, Donald Trump, to see it happen.

“It’s my hope that this new administration, once it gets organized — and I’m not being facetious — will be able to focus on, be as committed and enthusiastic as we were,” Biden told a packed room. “I will do everything in my power to work with the new administration.”

Towards the end of the Barack Obama administration, Biden was put in charge of the White House Cancer Moonshot, a task force created to find the cure for cancer. Although he’s no longer in the White House, Biden and his wife, Dr. Jill Biden, are continuing their crusade with the Biden Foundation. The foundation was launched in February.

Biden’s talk at SXSW is centered on his fight against cancer and providing an update on the White Hosue Cancer Moonshot initiative.

“We are at an inflection point in the fight against cancer that didn’t exists four or five years ago,” Biden said when launching the foundation. “We can change people’s lives.”

“We look forward to this new chapter where we will continue our work to ensure that everyone — no matter their income level, race, gender, age or sexuality — is treated with dignity and gets a fair shot at achieving the American Dream,” Biden added in a statement.

Fighting cancer is a personal struggle for Biden, since his son Beau Biden died of brain cancer in May 2015. There is also a foundation in Beau’s name, called the Beau Biden Foundation For the Protection of Children.

Notably, the Biden family was in the news this month after they confirmed that Joe Biden’s son Hunter Biden is in a relationship with Beau’s widow Hallie.

“We are all lucky that Hunter and Hallie found each other as they were putting their lives together again after such sadness,” Joe and Dr. Jill Biden said in a statement to the New York Post on March 1. “They have mine and Jill’s full and complete support and we are happy for them.” 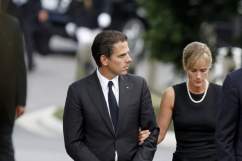