Juan Thompson, the suspect in some of the Jewish Community Center bomb threats, posted a series of incendiary tweets, calling capitalists “blood suckers,” labeling Donald Trump “Hitler,” wishing America was more like Cuba, and retweeting Hillary Clinton criticizing the president for not speaking out fast enough on hate crimes.

He criticized Donald Trump, calling him a “coward” and “predator” and accused the president of wanting to ethnically cleanse Chicago. Several posts advocated violence against Trump, saying he should be punched. He also wrote that Trump and his followers should be taken out. However, he also trashed Clinton, calling her a phony “white woman liberal.” (Warning: Many of the tweets contain graphic language).

In '03 on a high school trip to DC I was obsessed w/@HillaryClinton. Man I was young and dumb. pic.twitter.com/8MFVcJOlDV

Thompson is accused of making only some of the bomb threats that have come in against Jewish centers; a Jewish cemetery was also vandalized. Those incidents remain under investigation. There have been nearly 100 in all, and authorities don’t believe Thompson was responsible for all of them, according to AOL.

Thompson also wrote that he celebrated the death of Antonin Scalia, the conservative Supreme Court Justice.

However, the criminal complaint alleges that Thompson called in bomb threats to Jewish Community Centers as part of a campaign of harassment against a woman he had dated. He had harsh words for the Democratic Party too, accusing it of being boring, flaccid and useless, and was at times also critical of President Barack Obama (such as over deportations). In general, his Twitter posts are full of rants against racism.

He criticized white people (writing that they have “no shame”) and referring to their “vile ilk” and the “white media.”

He wrote: “You show me a capitalist, and I’ll show you a bloodsucker | Director of Communications–Gateway Housing Foundation |” on his Twitter profile.

He also posted on the bomb threats themselves.

Thompson, 31, was arrested in the string of threats against the centers, which had led to commentary about a troubling rise of anti-Semitism in America, as well as denunciation of it by Donald Trump in his speech to Congress.

.@AaronKatersky confirms 31yo Juan Thompson has been arrested by FBI in connection to the rash of bomb threats to Jewish Community Centers.

A senior editor for the Atlantic says Thompson was fired by the Intercept.

The Juan Thompson who was arrested for making JCC threats appears to be the same one fired from the intercept for manufacturing stories pic.twitter.com/Y6wgKEIhYa

The arrest was revealed on March 3.

Heavy has deleted the woman’s name in the tweet below. Thompson pinned this tweet to the top of his Twitter page. However, the complaint alleges that Thompson was harassing the woman for months and made the bomb threats to try to set her up as accusing him of making them. 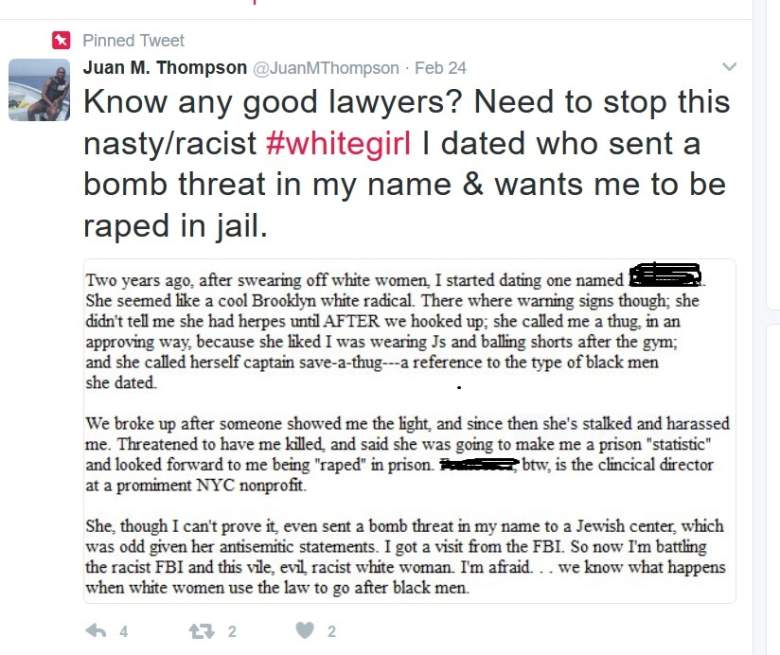 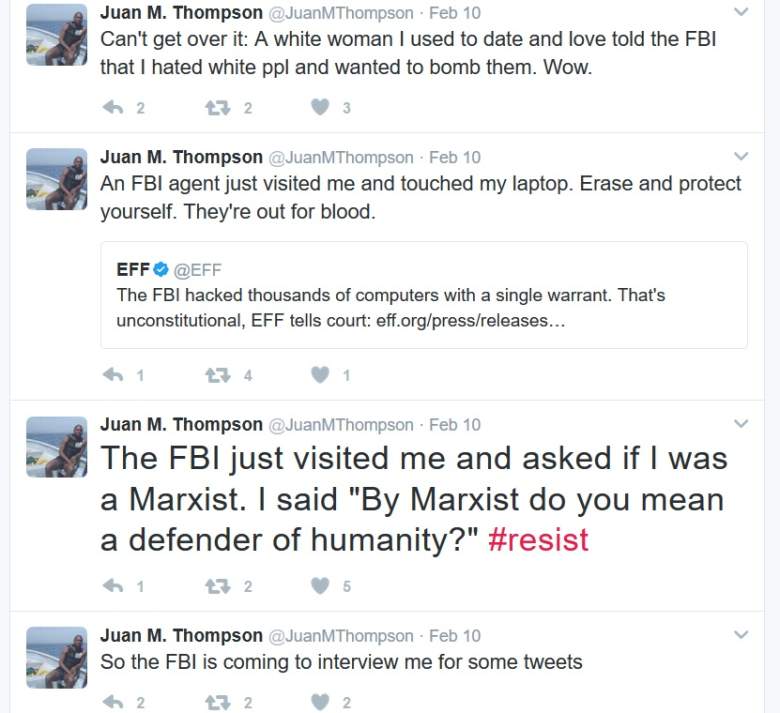 Thompson was often critical of the police on Twitter. 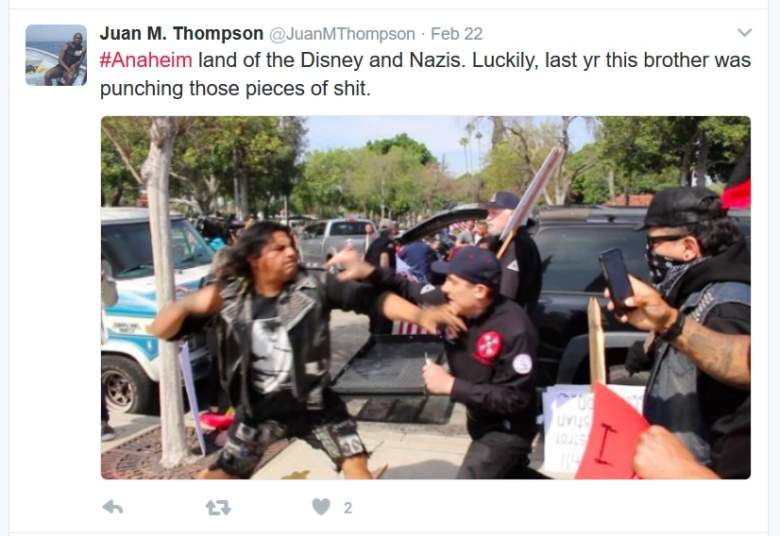 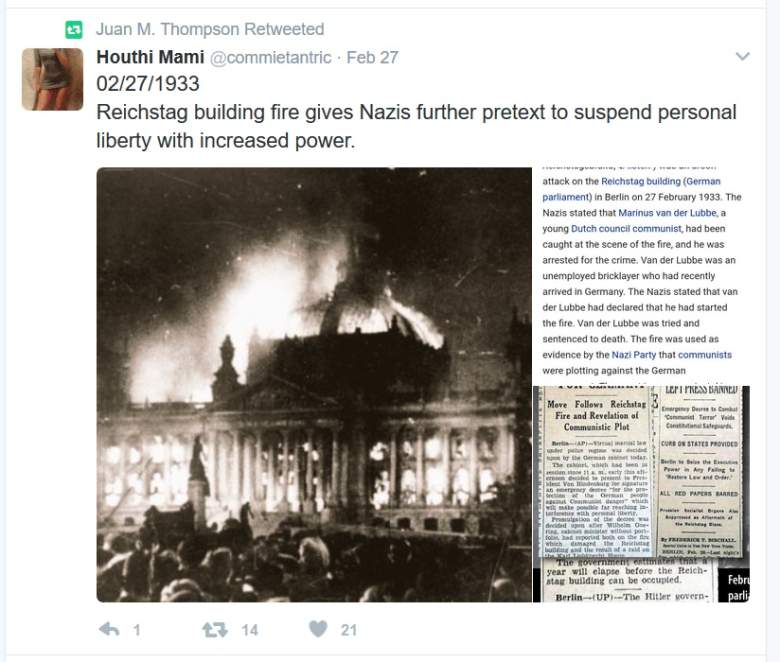 The Page Also Tweeted Angry Rants Against the ‘White Media’ 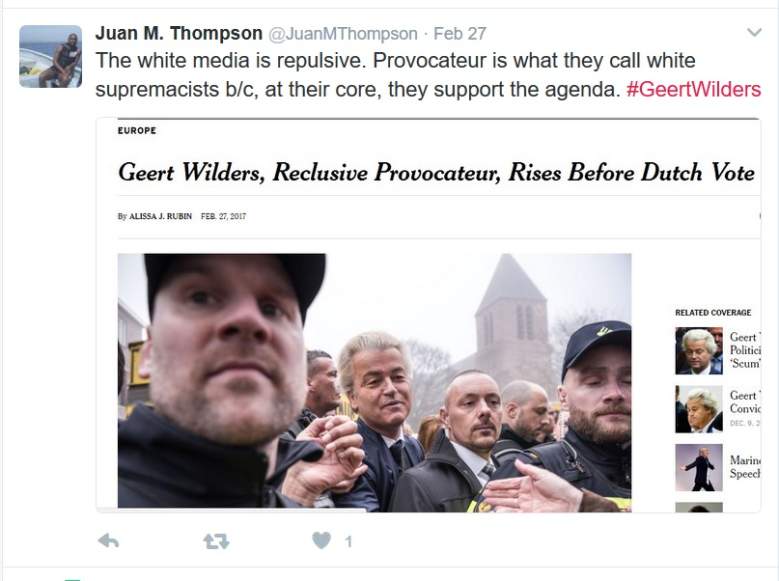 Thompson Wrote About Bigotry Against Jews

He accused the president of wanting to ethnically cleanse Chicago and said he should be taken out. 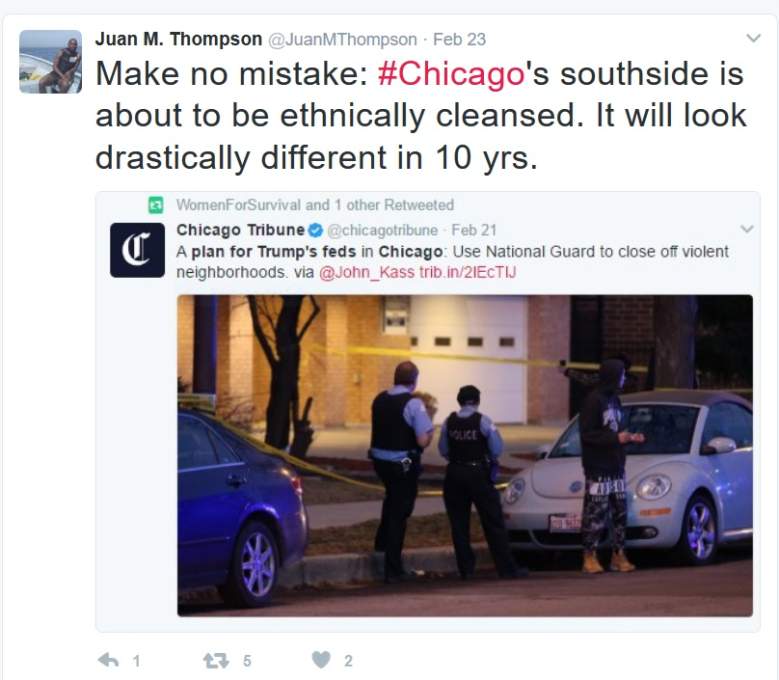 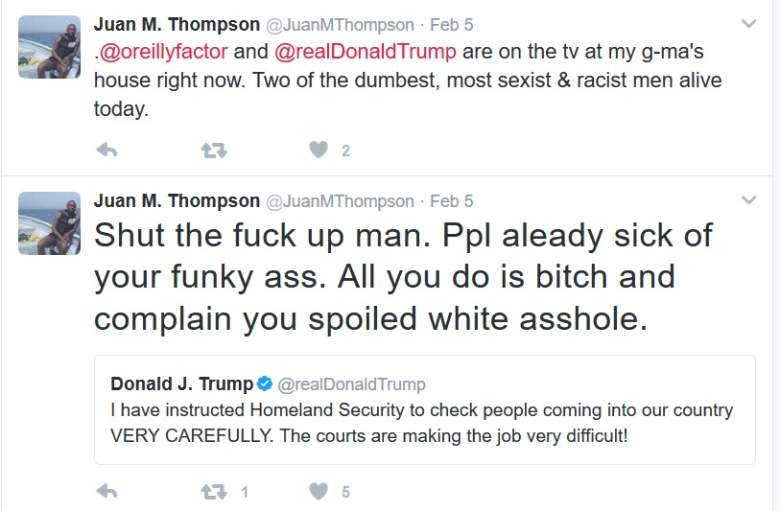 Thompson Ranted About White People & Was Influenced by Malcolm X 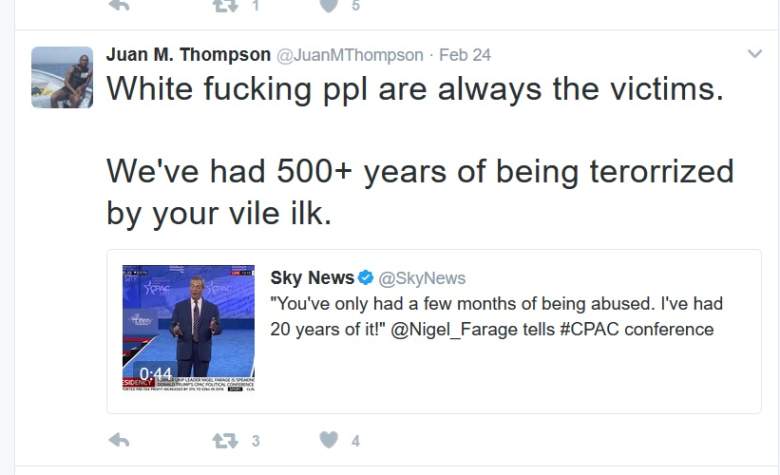 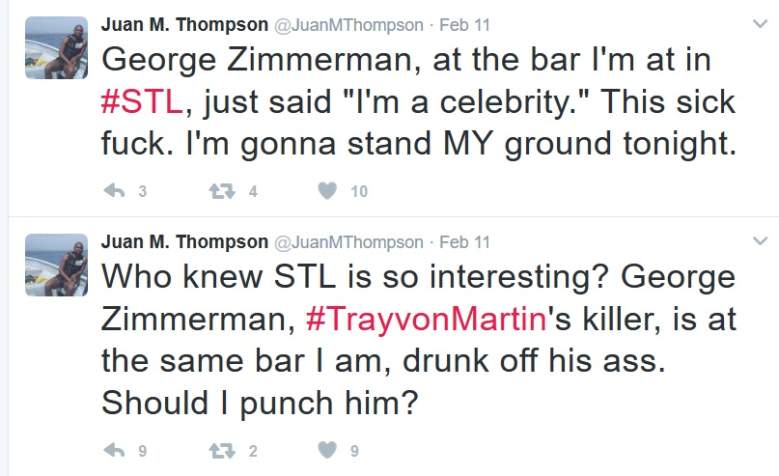 Thompson Was No Fan of the Democratic Party, Either & Also Criticized Obama & Hillary Clinton

He also posted opposition to the choice of Tom Perez as DNC chair, saying Trump would roll over him “like one of those old cartoons.” 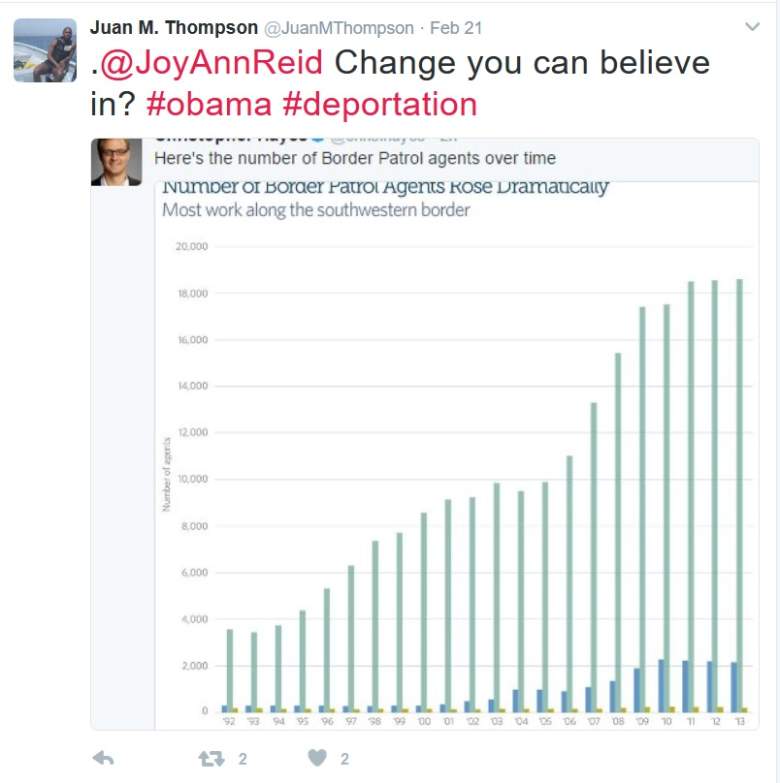 He had harsh words for Hillary Clinton. 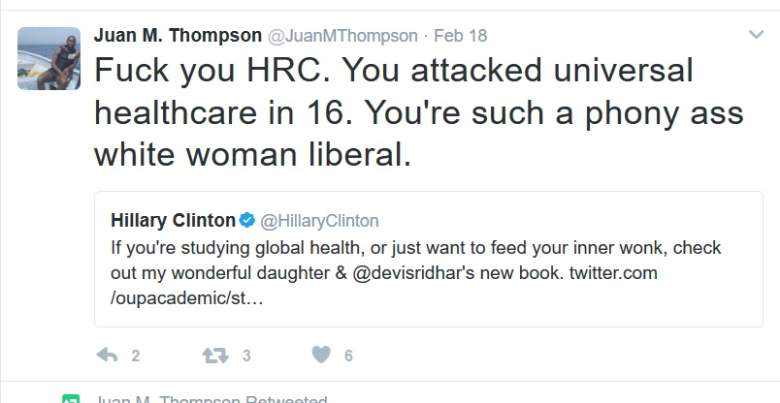 He said he was not a liberal.

He made it clear on Twitter that he opposes all presidents for their “imperialism.”

He Advocated Abolishing Borders & Was Against the Dakota Access Pipeline 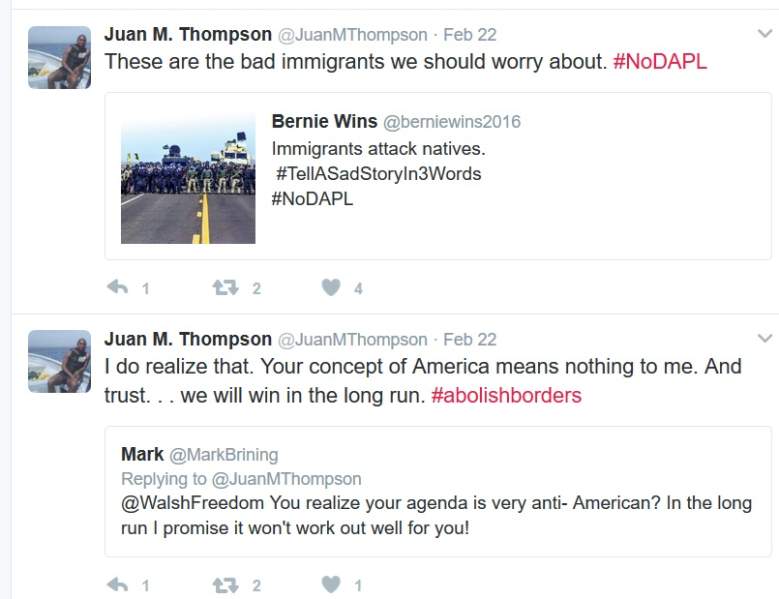 The complaint paints a very different picture from Thompson’s tweets. It accuses him of harassing a woman with whom he had a romantic relationship and making the bomb threats. You can read it here:

The complaint alleges that Thompson works at a social service organization in the New York area. It all started when, in 2015 and 2016, a woman ended her romantic relationship with him, according to the complaint. The woman’s boss then received an email the FBI is dubbing “the “Hoax News Email”). It was from “someone purporting to be a producer with a national news organization” and said the woman had been pulled over for drunk driving and was being sued for spreading a sexually transmitted disease. The FBI reviewed records and found it was sent “from an IP address that Thompson used to access one of his social media accounts.”

The complaint says the woman then received texts and emails, purportedly from a close friend and relative of Thompson, saying Thompson was the victim of computer hacking and not responsible for the “recent acts of harassment” and that he had gone into cardiac arrest after being shot in a robbery. In August 2016, the victim obtained a temporary restraining order against Thompson, according to the complaint.

The woman’s boss was contacted again. The complaint alleges that the victim then received an anonymous email with nude pictures that threatened to release them to the public. The woman’s human resources director also received an email saying the woman had threatened to kill Thompson and accusing her of being anti-Semitic.

The complaint says that Thompson actually lives in St. Louis. A detective visited him and he claimed his email account was hacked.

Thompson then allegedly made eight threats against Jewish Community Centers, the complaint says, as “part of his campaign of harassment against the victim.”

The complaint alleges that he made threats in the victim’s name and in his name, which he claimed was an attempt by the victim to “falsely implicate Thompson.” 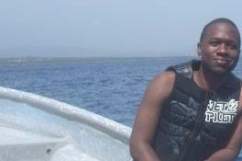 Loading more stories
wpDiscuz
2
0
Would love your thoughts, please comment.x
()
x
| Reply
Juan Thompson, the suspect in some of the Jewish Community Center bomb threats, posted angry rants on Twitter, alleging a girlfriend set him up. Read some of them.