The Metropolitan Police officer killed in the London terror attack on March 22 has been identified as PC Keith Palmer. He was one of four people killed in the attack, which happened just outside Parliament in London. Police said 40 other people were wounded.

The attack began with an attacker hitting pedestrians on Westminster Bridge. Scotland Yard says he then crashed into a fence near the Parliament building and jumped out. He attacked police officers with a knife, stabbing Palmer, before the suspect was shot and killed.

The attack is currently under investigation and the suspect has not been identified yet. The New York Times reports that police arrested eight people at six different addresses around Great Britain. Police still believe the suspect, who was born in Britain and known to authorities, acted alone.

As the Washington Post notes, the Islamic State, also known as ISIS, claimed responsibility for the attack, although British authorities have said they’ve found no evidence of direct links between the group and the suspect. ISIS claims the attacker was a “soldier” for them.

The BBC reports that the other victims of the attack have not been identified. Of the other three killed, at least two were on the bridge. Of the 40 injured, three were policemen on the bridge. Three French schoolchildren and four Edge Hill University students were also injured.

Here’s what you need to know about Palmer and the incident. 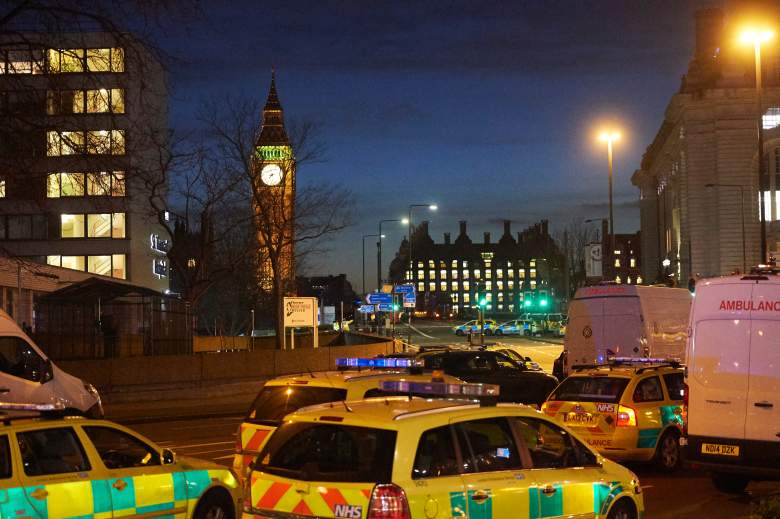 During a press conference, Assistant Commissioner Mark Rowley confirmed Palmer’s identity. He also told the media that three other police officers were injured, including two in serious condition, reports the Mirror.

Rowley also confirmed that the 48-year-old Palmer was a husband and father who served in the Metropolitan Police force for 15 years. He was a part of the “parliamentary and diplomatic protection command,” Rowley said.

“He was someone who left for work today expecting to return home at the end of his shift and he had every right to expect that to happen,” Rowley, who is Scotland Yard’s chief terrorism officer, told the media.

Shortly before Palmer’s identity was confirmed, police said the death toll now stands at four, with 40 others injured. On Wednesday night, police raised the death toll to five, but The New York Times reports that the number was lowered back to four on Thursday morning.

The Guardian reports that Rowley said that one of the other deceased victims is a woman in her mid-40 and a man in his mid-50s. There was an American among those wounded.

During the attack, Tobias Ellwood, the Foreign Office Minister and a Member of Parliament, was seen trying to save Palmer’s life, reports the BBC. Ellwood, a former Army officer, performed mouth-t-mouth resuscitation to try to save Palmer.

Adam Arfiyie, another Conservative MP and Tobia’s friend, told the BBC that Ellwood rushed to help the fallen officer, even as police told him to stay away from the scene. Other MPs praised Ellwood for his actions.

“Today, Tobias gave MPs a good name. He was utterly heroic, pure and simple. He went above and beyond and did all he could to save a police officer,” Tim Farron, leader of the Liberal Democrats, told the BBC.

@Tobias_Ellwood is an absolute hero for what he did to help the policeman this afternoon!

Thank you Bournemouth MP @Tobias_Ellwood for coming to the aid of a police officer and doing CPR. #Hero pic.twitter.com/nLDZGLNe6y 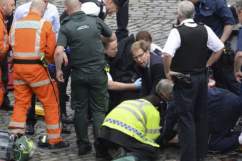 3. Palmer Was Not Armed at the Time of the Attack

The incident began at 2:40 p.m. local time, when single attacker drove his SUV over Westminster Bridge, driving through a group of pedestrians that included three police officers who were just at a commendation ceremony. During the attack, a woman was seen falling into the River Thames, but was later saved.

When he crashed into a fence outside the Houses of Parliament, he left his vehicle to attack the police officers there with two knives. According to the BBC, the officer the attacker killed, Palmer, was not armed. After attacking Palmer, the man was shot by armed officers and died. Police said at around 5:40 p.m. local time that the suspect was dead, reports ITV.

Telegraph reporter Gordon Rayner wrote that he could hear the loud “bang” from the gunshot while inside Parliament.

“People were running away from the car in every direction, clearly in a state of terror. Even when they were a safe distance from the car, they kept on running, some shouting and screaming, and a group of around a dozen of them dashed around the corner into Parliament Square,” Rayner wrote.

The Telegraph also reports that Palmer was in plain clothes.

Fifty minutes after the incident was first reported, Scotland Yard termed it a “terrorist incident.” 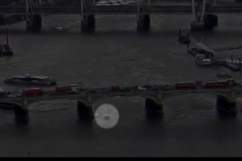 4. MPs Said the Attack Wouldn’t Have Happened If the Gate Was Locked

In interviews with the Telegraph, Members of Parliament said that the attack might not have happened if the two police officers at the vehicle gate had kept it locked. The Carriage Gates, as it is called, are usually left slightly open because they are so frequently used.

“I think we will need to look at security at the Palace [of Westminster] in the wake of this incident, but that is a plan for another day,” she continued. “I think tonight we need to be remembering all those who have been caught up in today’s tragic events.”

Iain Duncan Smith, a former Cabinet minister, told the Telegraph that he was surprised that there wasn’t an armed police officer outside the gates.

However, Conservative MP Richard Benyon criticized the media for reporting that security was breached. “Irritated by coverage that says Parliament perimeter was breached. It wasn’t. Attacker was taken down at gate. Highly professional response,” he tweeted.

Irritated by coverage that says Parliament perimeter was breeched. It wasn't. Attacker was taken down at gate. Highly professional response

Hours after the attack, Prime Minister Theresa May spoke outside 10 Downing Street, telling the British public that the attack was “sick and depraved.” She also called the police “exceptional men and women.”

“We will all move forward together, never giving in to terror and never allowing the voices of hate and evil to drive us apart,” May said, reports the BBC. “The location of this attack was no accident. The terrorist chose to strike at the heart of our capital city where people of all nationalities, religions and cultures come together to celebrate the values of liberty, democracy and freedom of speech.”

May has ordered flags to be flown over Downing Street at half-mast to honor the victims, reports ITV.

On Thursday morning, May confirmed that the suspect was born in Britain and was previously investigated by MI5. She called him a “peripheral figure.”

“The man was British-born and some years ago was once investigated by MI5 in relation to concerns of violent extremism,” May said, reports The Guardian. “He was a peripheral figure. His case was historic. He was not part of the current intelligence picture.” 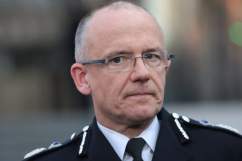