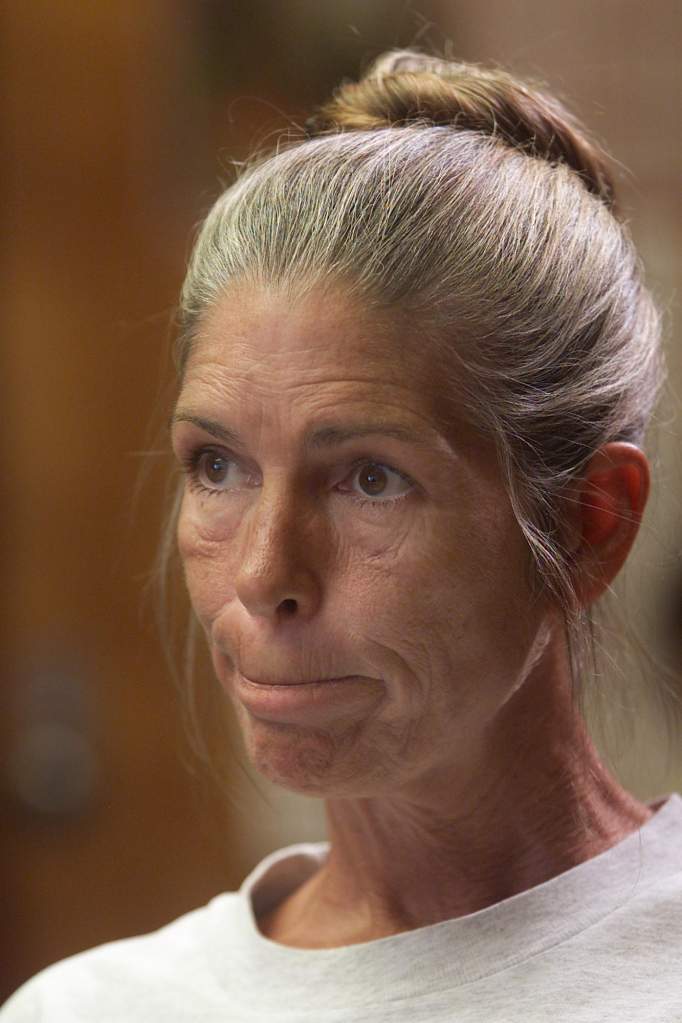 Former Manson family member Leslie Van Houten reacts as members of a California prison board declare her parole dennied, 28 June, 2002, at the California Institution for Women in Corona, California. (Getty)

Read on to learn more about Van Houten, who was just 19 when she helped Charles Manson carry out the murders of Leno and Rosemary LaBianca.

1. She Was the Youngest Manson Family Member 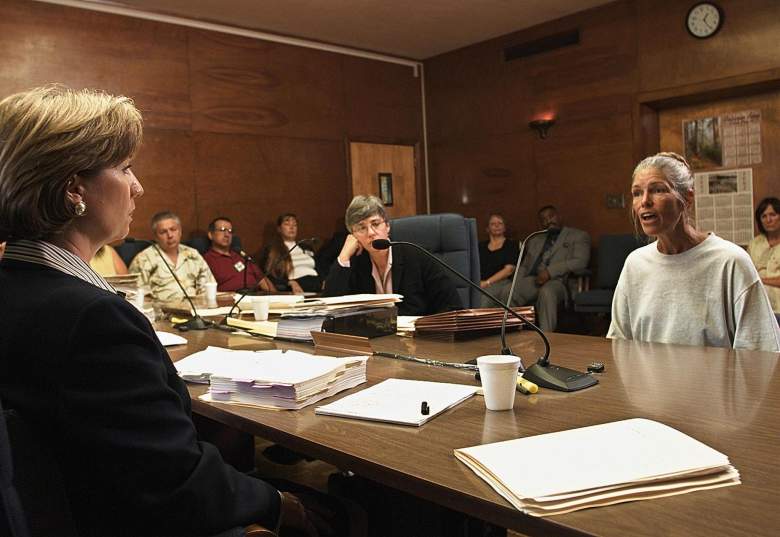 Sheron Lawin (L), a member of the Board of Prison Terms commissioners, listens to Leslie Van Houten (R), after her parole was denied 28 June 2002 at the California Institution for Women in Corona, California. Van Houten, 53, has served over 30 years in prison for her involvement in the Tate-LaBianca killings. (Getty)

Van Houten met Charles Manson through then-boyfriend Bobby Beausoleil in 1968, when she was just 19-years-old. She began living with the group at the Spahn Ranch outside of Los Angeles County that same year, and in 1969, she participated (along with Charles Watson and Patricia Krenkwinkel) in the murders of Rosemary and Leno LaBianca. Van Houten is said to have stabbed Rosemary approximately 16 times.

In late 1969, Charles Manson and the rest of the Manson family was arrested and charged for their role in the killings.

2. She Is the Youngest Person Ever Sentenced to Death in California But Was Later Commuted to Life in Prison 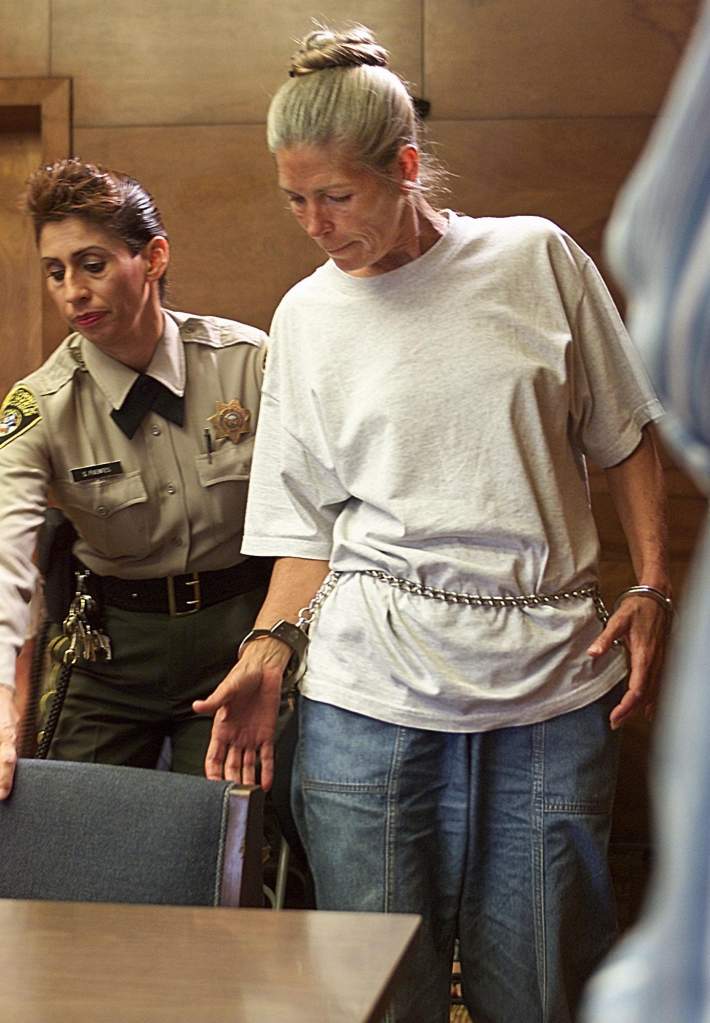 Corrections officer Sandra Fuentes (L) assists inmate Leslie Van Houten (R) as arrives for her parole hearing before members of the Board of Prison Terms 28 June 2002 at the California Institution for Women in Corona, California. Van Houten, 52, has served over 30 years in prison for her involvement in the Tate-LaBianca killings. (Getty)

On March 29, 1971, Van Houten was sentenced to be executed, making her the youngest woman to ever be sentenced to death in the state of California. In 1972, however, California ruled the death penalty unconstitutional, and Van Houten’s sentence was commuted to life in prison.

In 2016, after being denied parole 19 times, a California review board recommended parole for Van Houten– a decision which was met with disdain from family members of the victims. In July 2016, California Gov. Jerry Brown denied her parole, overturning the board’s recommendation that claimed Van Houten was no longer violent. 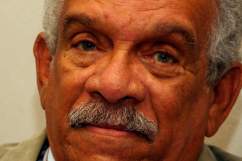 3. She Has Completed Two College Degrees in Prison 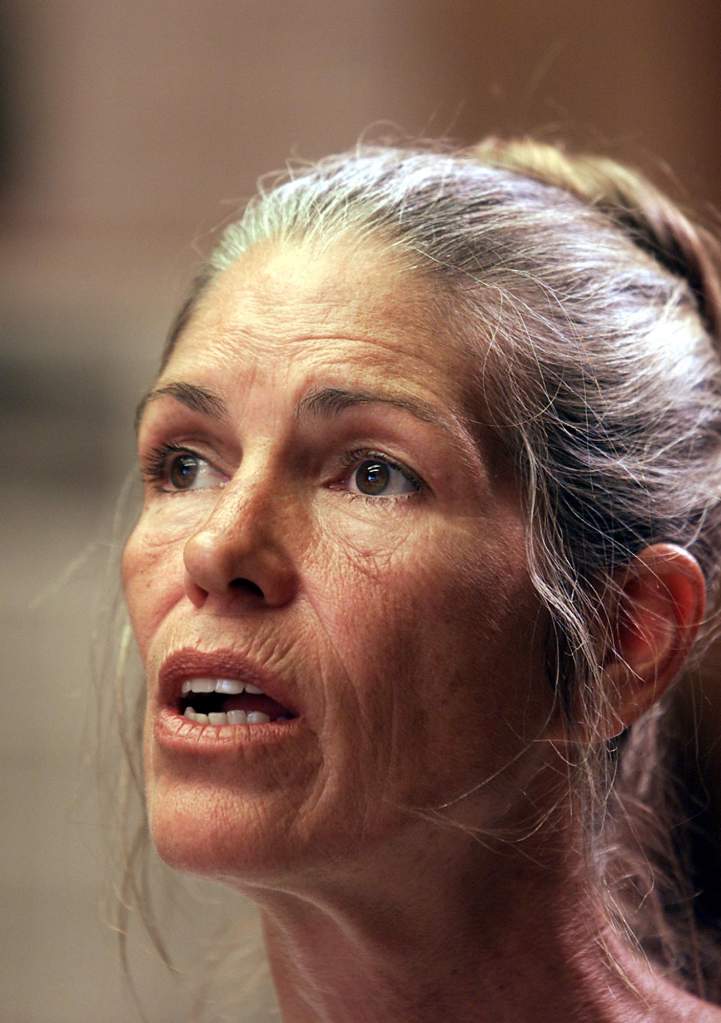 Leslie Van Houten, a former follower of Charles Manson, listens as former Deputy District Attorney Stephen Kay (not seen) describes the 1969 killing scene of the Smaldino couple during a parole hearing 28 June 2002 at the California Institution for Women in Corona, Califonia. Van Houten, 52, who has served over 30 years in prison for her involvement in the Tate-La Bianca killings, was denied parole. (Getty)

During her time in prison, Van Houten has completed two college degrees and runs a self-help group for incarcerated women. She has been described as a model inmate. Gov. Jerry Brown acknowledged the progress Van Houten had made when he denied her parole, but ultimately decided her ability to stay out of trouble behind bars did not mean she was fit for release. “Both her role in these extraordinarily brutal crimes and her inability to explain her willing participation in such horrific violence cannot be overlooked and lead me to believe she remains an unacceptable risk to society if released,” Brown wrote.

Van Houten’s lawyer, Rich Pfeiffer, responded by saying he would be challenging Brown’s decision. NBC writes, “[Pfeiffer] said he will challenge the decision in Los Angeles County Superior Court, where he hopes Van Houten’s parole will fare better ‘because the judges and the courts have less political pressure than does someone like the governor.'”

4. She Is a Former Homecoming Princess

Van Houten was born in Los Angeles in 1949, and grew up in a middle-class family. She has an older brother, and an adopted brother and sister.

As a child, Leslie was outgoing and athletic, and in high school, according to The Independent, she was twice elected homecoming princess. Her parents divorced when she was 14, and by age 15, she began experimenting with drugs like LSD and Benzedrine.

5. She Has Said She Is Deeply Ashamed of Her Actions

At her 2002 parole hearing, Van Houten admitted she is deeply ashamed of her actions. The LA Times reports her as saying, “I take very seriously not just the murders, but what made me make myself available to someone like Manson.”

During her 2016 hearing, Van Houten said, “I don’t let myself off the hook. I don’t find parts in any of this that makes me feel the slightest bit good about myself.”

Charles Manson, and many of his followers, are still jailed today. Susan Atkins died in prison in 2009, and Patricia Krenwinkel and Charles Watson have both been denied parole several times. 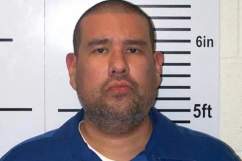