One of the chief negotiators for peace in Northern Ireland has died at the age of 66. Sinn Fein and former IRA leader Martin McGuinness passed away on March 21. His death was first announced in a post on Sinn Fein’s official website. The posting says that McGuinness died after a “short illness.”

McGuinness had resigned his post as First Deputy Minister in Northern Ireland in January 2017. The Irish Times reported at the time that he had been suffering from amyloidosis. Following that report, McGuinness argued that the Irish Times had violated his family’s privacy.

The disease happens when an abnormal protein, amyloid, builds up in the body. It is extremely rare. The amyloid can build up in a person’s heart, kidneys, liver, spleen, nervous system and digestive tract. The Mayo Clinic says there is no cure for the condition.

The Irish Times reports that the condition is heredity. Since 1986, there has been a bizarrely high number of cases reported in the Irish county of Donegal. Martin McGuinness’s mother, Peggy, is a native of Buncrana in the country.

A study, quoted in the Irish Times report, says that the cases are linked to to a single man named, Conall Gulban.

In his memoir, From Guns to Government, McGuinness wrote about giving up alcohol and smoking cigarettes in the early 1970s. McGuinness quit so that he could “lead the traditional abstemious life of the active service volunteer.”

McGuinness is survived by his wife, Bernadette Canning, and the couple’s four children. Funeral arrangements have not yet been made available. Although it’s likely that there will be a large public memorial in McGuinness’s home city of Derry. 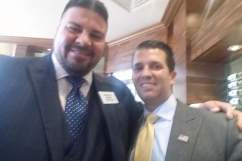 Loading more stories
wpDiscuz
2
0
Would love your thoughts, please comment.x
()
x
| Reply
The former IRA commander had been diagnosed with a rare disease in January 2017.