Which roads are snowed and salted in New York? (Getty)

What are the road conditions like in New York? How do you know which roads in New York City have been plowed and salted? If you live in New York, then you’re likely to experience snow delays or cancellations from Winter Storm Stella. In fact, officials are urging residents not to travel right now. Mayor de Blasio canceled schools for Tuesday and non-essential personnel are urged to stay at home. MTA subway service will be canceled starting at 4 a.m. on Tuesday and underground express subway service is already suspended, NBC New York reported.

Driving is going to be extremely hazardous on Tuesday. At some point, probably on Wednesday, you will likely want to get back out on the road. When you do, here’s where you can find more information about snow plows in your area:

New York City has an official snow plow map that you can visit at this link. You’ll first have to click “continue” after reading the disclaimer. (If the tracker isn’t currently tracking any snow plows, you’ll see a pop-up that lets you know this.) The map has two legends at the bottom right, one for snow vehicle activity and one for snow removal designation, showing what’s primary, secondary, and tertiary. The colors on the map aren’t lighting up from far away. You’ll have to zoom into the map to see the snow vehicle activity. You can also click on any area on the map and a pop-up will appear telling you the time a snow vehicle last visited the area.

You can also visit this link to see a map of snow removal service requests in the New York City area.

Visit this link to find out about mass transit disruption in New York. 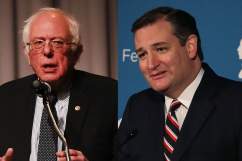 Bernie Sanders vs. Ted Cruz: Who Won the Debate? [POLL]