A friend posted this from Oak Grove Missouri tonight. They're ok but the neighborhood is a mess. @chriswymt @AndrewWYMT @thekyniche pic.twitter.com/IoqJoP8A5G

Tornadoes and strong storms struck parts of the Midwest on March 6, destroying many neighborhoods and businesses.

One of the areas hardest hit was Oak Grove, Missouri. As of 11 p.m. EST, about 15 injuries were reported, though none seem to be life-threatening.

Oak Grove is located about 25 miles away from Kansas City in Jackson County. It reported a population of 7,795 during the 2010 census.

Sni Valley Fire Chief Carl Scarborough said the initial prognosis is that there was “significant damage” throughout a wide area in Missouri.

Additional details about the damage from the storms are still filtering in. The National Weather Service in Kansas City said it’s sent assessment teams to survey the damage and will update reports accordingly.

The Johnson County Executive Airport, located about 50 miles away from Oak Grove, also suffered extensive damage to planes on the tarmac, hangars and the facility itself.

Other parts of Missouri, Kansas and Iowa also felt the brunt of the storm and tornadoes.

Here are some of the photos & videos of the damage:

Images continue to come in from Oak Grove, MO. pic.twitter.com/EuIvP9PFDg

Photos like this from Oak Grove should serve as motivation to take the Tornado Drill (which will occur at 10 AM today) seriously! pic.twitter.com/kjY9CToyFE

Photos show damage in Oak Grove, Missouri, as @NWS confirms at least two tornadoes have touched down in the state. https://t.co/yBa1iq91CF pic.twitter.com/z2tGVbBeCf

The roof was ripped off a house, a metal angler in one and patio furniture everywhere along 25th St in Oak Grove. Tornado damage. #kmbc pic.twitter.com/WgpkN0joMG 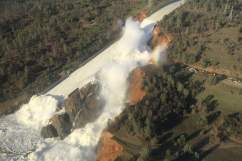 Loading more stories
wpDiscuz
2
0
Would love your thoughts, please comment.x
()
x
| Reply
Extensive damage and injuries have been reported after a tornado ripped through the Midwest on March 6. Parts of Missouri, Iowa and Kansas suffered damage.