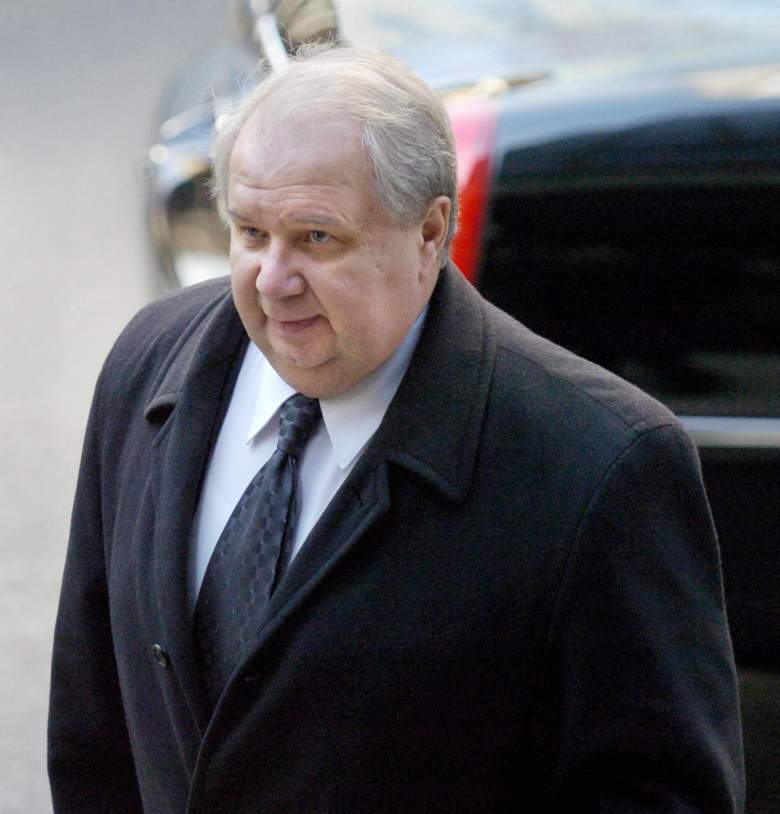 The Russian ambassador to the United States whose communications with top leaders have provoked repeated controversy is an experienced diplomat accused of being a top spy recruiter for Moscow.

The experience of Sergey Kislyak spans decades, going back to the old Soviet Union. He first emerged as a player for the Soviets in the United States during the Mikhail Gorbachev era, where he was known for his expertise on arms control, reported CNN.

He’s been Russia’s ambassador to the U.S. for almost a decade, finding himself in the midst of twin episodes of political intrigue. First, his conversations with Michael Flynn led to the national security adviser’s resignation for not being up front with Vice President Mike Pence. Now there are calls – even from some top Republicans – for Attorney General Jeff Sessions to recuse himself from any probe into Russia because Sessions communicated twice with Kislyak during the presidential campaign despite telling Congress he had not communicated with the Russians.

On March 2, Sessions announced he would recuse himself from any investigations into the presidential campaign.

1. Kislyak Has Decades of Foreign Service for Russia & Former Soviet Union, Dating to the 1970s 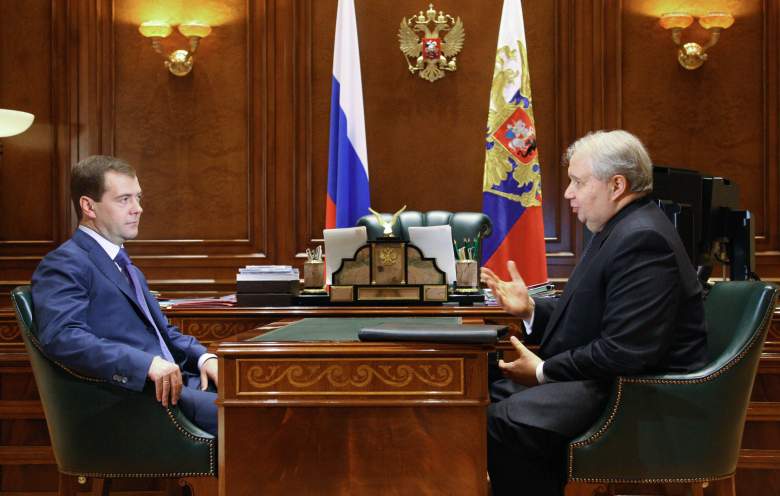 Russian President Dmitry Medvedev (L) meets with Russia’s ambassador to the USA Sergei Kislyak outside Moscow in Gorki on January 15, 2009. Medvedev has expressed hopes for “positivity” in relations with the new US government under Barack Obama. (Getty)

According to his embassy biography, Kislyak was born in 1950 and “graduated from Moscow Engineering Physics Institute in 1973, as well as from USSR Academy of Foreign Trade in 1977.” He’s been an employee of the Foreign Ministry of the Russian Federation since 1977.

In the 1980s, he served the USSR’s mission to the United Nations in New York, and was a First Secretary, Counselor of the Embassy of the USSR to the U.S.

He was Russia’s ambassador to Belgium and the permanent representative of Russia to NATO in Belgium, according to the embassy bio. After that, he was Deputy Minister of Foreign Affairs. 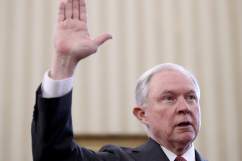 2. Kislyak Is Considered Moscow’s ‘Top Spy Recruiter’ in the United States Who Was Known For His Lunches

According to CNN, “Current and former US intelligence officials have described Kislyak as a top spy and recruiter of spies.”

Moscow has denied that account, saying that Kislyak is a diplomat. The Russian media site Sputnik News brandished the CNN account, writing, “US intelligence bodies consider that Russian Ambassador to the United States Sergei Kislyak could be a spy, due to his alleged association with Russian secret services.”

CNN is also reporting that Russia is angrily denying that Kislyak is a spy, questioning the reporting with anonymous sources and calling the Russian a respected diplomat.

Asked about whether Kislyak is a spy, Kremlin spokesman Dmitry Peskov said to CNN, “Nobody has heard a single statement from US intelligence agencies’ representatives regarding our ambassador. Again, these are some depersonalized assumptions of the media that are constantly trying to blow this situation out of proportion.”

The former U.S. ambassador to Russia told CNN that Kislyak had held “all the most important jobs in the Foreign Ministry — except one,” describing him as “effective and experienced.”

CNN reported that Kislyak was also known for the “fantastic lunches” at his residence.

3. Kislyak Is a ‘Technocrat’ Born in the Ukraine & Not Part of Putin’s ‘Inner Circle’

Islamabad, PAKISTAN: Pakistani Foreign Minister Khurshid Kasuri (L) talks with Russian Deputy Foreign Minister Sergey Kislyak during a meeting in Islamabad, 15 February 2007. Kislyak arrived in Islamabad on a two-day official visit to hold talks with Pakistani leaders and to attend the fourth round of the Pakistan-Russia Consultative Group on strategic Stability meeting. (Getty)

The Russian embassy bio says Kislyak “holds a diplomatic rank of Ambassador Extraordinary and Plenipotentiary,” speaks English and French, and is married with an adult daughter.

According to the Washington Post, Kislyak is Ukrainian. The Post reported in 2014 that Kislyak is described as a “smart, genial technocrat with moderate influence in Moscow. He is not part of Putin’s inner cadre and has spent much of his professional career abroad.”

The Post added that he was “Moscow’s first representative to NATO, the Atlantic military alliance originally formed as a bulwark to the Soviet Union.” The old Post article reported that Kislyak was known for his many meetings with U.S. officials, worked on arms control during the Reagan era, and is considered low key.

First it was Michael Flynn, Trump’s National Security Adviser. Flynn resigned shortly after it emerged that he spoke with the Russian ambassador about sanctions against Russia shortly before Trump took office, contrary to past denials, The Washington Post is reporting.

The New York Times ran a similar report, saying Flynn spoke with Ambassador Sergey Kislyak about sanctions and cooperation between the two countries in the month before Trump was inaugurated and while Barack Obama was still in the White House. The newspaper quoted unnamed officials as saying the conversations were “inappropriate” and indicated there were transcripts because the government engages in eavesdropping.

There is now a growing chorus of people, including some top Republicans, calling for Jeff Sessions to recuse himself in any probes into Russian interference in the 2016 presidential election (and some top Democrats are demanding his resignation). Sessions told the Senate Judiciary Committee during his confirmation hearing that he “did not have communications with the Russians” during Donald Trump’s presidential campaign.

The Washington Post is now reporting that, according to the Department of Justice, Sessions, as a Republican senator “spoke twice last year with Russia’s ambassador to the United States.” The New York Daily News reports “Sessions was a senior member of the Armed Services Committee and serving as a top foreign political adviser to the Trump campaign at the time.”

The Post reported that one of the meetings was “a private conversation between Sessions and Russian Ambassador Sergey Kislyak that took place in September in the senator’s office.” Sessions also spoke with Kislyak in July, the Post reported, but his spokesman has denied he misled Congress and told the Post that Sessions did “not consider the conversations relevant to the lawmakers’ questions.”

In addition to the September meeting in his office, The Chicago Tribune reported of a July contact: “Sessions attended a Heritage Foundation event in July on the sidelines of the Republican National Convention that was attended by roughly 50 ambassadors. When the event was over, a small group of ambassadors approached Sessions as he was leaving the podium, and Kislyak was among them, the Justice Department official said. Sessions then spoke individually to some of the ambassadors, including Kislyak, the official said.” 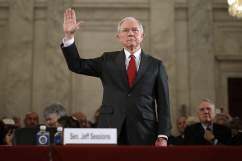 That account comes from Russian media, which reported, “Russia’s ambassador to the United States Sergey Kislyak received and accepted invitation to the inauguration of the US President-elect Donald Trump.”

Sputnik News reported this was not uncommon, though, saying, “According to the practice and protocol rules, foreign ambassadors are invited to the US president’s inauguration.”

Kislyak was also at Trump’s speech to Congress. House Minority Leader Nancy Pelosi said she never met with him, but a photo showed her at a table with him.

“It’s a shame,” Russian Foreign Ministry spokeswoman Maria Zakharova said of the media coverage, according to the Russian site, Sputnik News. The site claimed that, according to Zakharova, “Mainstream media reports on contacts between Kislyak and Sessions are aimed to mislead public opinion in the US and the world.”

Russia has claimed that Kislyak is not a top spy recruiter and claims “he work of diplomats is to develop contacts in the host country,” asserts the Russian propaganda site.