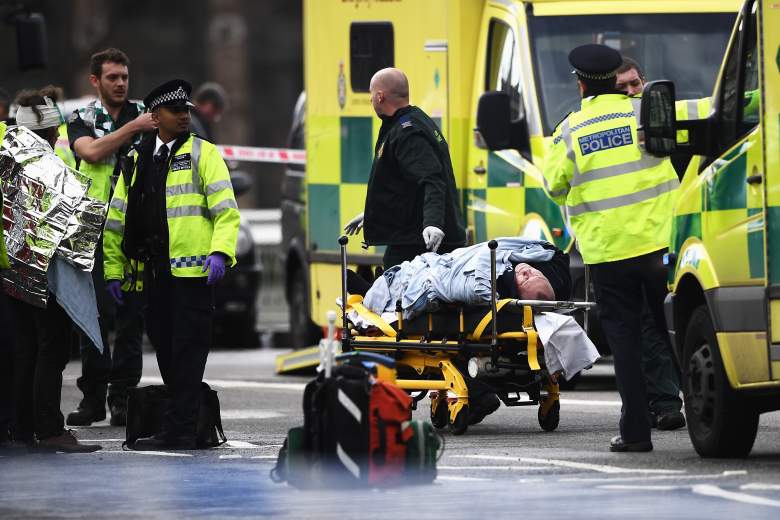 An attacker drove a SUV into pedestrians on the Westminster Bridge, killing and wounding several others, crashed into a fence near the UK Parliament and then attacked police officers with a knife before he was shot by police.

Five people were killed in the attack, including a police officer and the assailant, and at least 40 others were injured, the London Metropolitan Police said at a press conference.

The police officer who was stabbed to death by the suspect was identified as Keith Palmer, a 15-year veteran of the Metropolitan Police.

Prior to making his way toward Parliament, the suspect reportedly ran into groups of pedestrians on Westminster Bridge with a car, and some witnesses described seeing the car crash into a fence.

In addition, a woman was reportedly pulled from the River Thames near the bridge. She survived the attack and was treated by paramedics on a pier nearby. It’s thought that she was hit or jumped into the river when the car headed toward pedestrians.

A woman was pulled alive from the River Thames and is being treated by paramedics on a nearby pier. It's thought she was on bridge at time

After the crash, the suspect reportedly ran toward the Parliament and armed police officers, where he was shot and killed by authorities. Because of the incident, the House of Commons suspended its agenda for the rest of the day and has been placed on lockdown.

A statement sent out in Arabic on Twitter on March 23 confirm that the attacker was a member of the “Islamic State.”

Translated into English, the statement, alleged to be from the terror group ISIS, said:

Authorities refused to release the name of the suspect March 23, but provided more details about his identity. They referred to him as British born, saying that he had been the subject of previous investigations by the MI5, the LA Times reported.

British Prime Minister Theresa May reiterated that he was known to British intelligence, saying in a speech to members of Parliament on March 23 that the assailant was “once investigated over concerns about violent extremism.”

Details of the incident are still filtering in and will be updated here once made available.

Here’s some photos and videos from the scene:
Note: Some of the videos and photos below contain graphic content.

Ministers at Parliament Were Evacuated

Students Were Shown Being Escorted to Safety By Police

School children caught up in incident being led away from Westminster by police pic.twitter.com/UDRkkSQCue

Ambulance helicopter landing on Parliament sq. looks like at least two casualties, one of them the attacker who was shot pic.twitter.com/nclsqlK8ga

Amidst a Huge Police Presence, Westminster Square Was Evacuated for Fear of a Bomb

My current view. A lot of emergency services on the bridge apparently a shoooting there too. Very scary pic.twitter.com/AH4SBG2vwV

The Moment Gunfire Was Heard Inside Parliament Was Caught on Video

The moment UK Parliament was suspended as "sounds similar to gunfire" were heard outside⏩pic.twitter.com/h6w3AiuWcw#PMQs #london #britain