Winter Storm Stella is beginning to make her mark on the Northeast, as thousands of flights have been canceled and residents are hunkering down, waiting for travel bans to be lifted. Here are maps and radars showing predictions for the blizzard’s path today and where you might see the most snowfall. Above, you can see a loop of the storm’s progress as of 3:13 a.m. Eastern.

New York may see zero visibility in the morning, according to maps and radars:

Around 2:40 a.m. Eastern, snow was beginning to fill the radar for Connecticut and New York regions:

New Jersey, New York, and Connecticut may see gusts of 50 to 60 mph, with blizzard conditions likely:

And here’s a look at the low pressure center:

Center of low pressure at 972 mb may pass over or just east of Boston. Dust off your barometers 10 pm Tuesday pic.twitter.com/t4Lnk1eyvg

A lot of precipitation is on the way. In Boston, for example, the heaviest snowfall will likely hit between 10 a.m. and 4 p.m. according to the National Weather Service.

There's a lot of precip on the way. Haven't seen a radar this loaded in a while. Beneficial side of storm is the moisture. pic.twitter.com/jdiEnJhUjD

And here’s a look at warm/moist air crashing into Arctic air, creating the snow rates:

Today's storm will have incredible amount of warm/moist air crashing into Arctic air. Will create intense snow rates this AM! #blizzard2017 pic.twitter.com/JZoPDbloMx

Want to see the most updated radar of what’s happening right now? Weather.com has it right here. 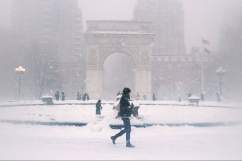 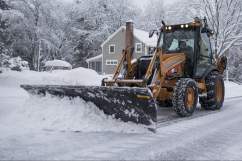