A South Pasadena father is accused of murdering his namesake son shortly after taking the boy to Disneyland in a macabre plot to get revenge against his ex-wife.

Aramazd Andressian Sr. is charged with killing his son, Aramazd Andressian Jr., who disappeared two months before after a trip to Disneyland. The child’s body has now been found in a lake area previously searched, and authorities are now accusing the father of killing his son “to get back at his ex-wife Ana Estevez amid a tumultuous divorce.” The father pleaded guilty to killing the boy in a court hearing in which the child’s mother clutched an urn carrying his ashes.

had given a complicated story about what happened when his 5-year-old namesake son went missing.

For starters, he says he was knocked unconscious but doesn’t know why. What’s known for sure: Aramazd Jr. was missing since April 22.

Police took the father into custody and then released him, before arresting him again, and they’ve searched his house and a lake for the child. The father’s law firm has released a series of pictures of Andressian and his son to draw a contrast to the mugshot being circulated in the media. Here’s one of them:

1. The Child Was Seen Leaving a Theme Park With His Father 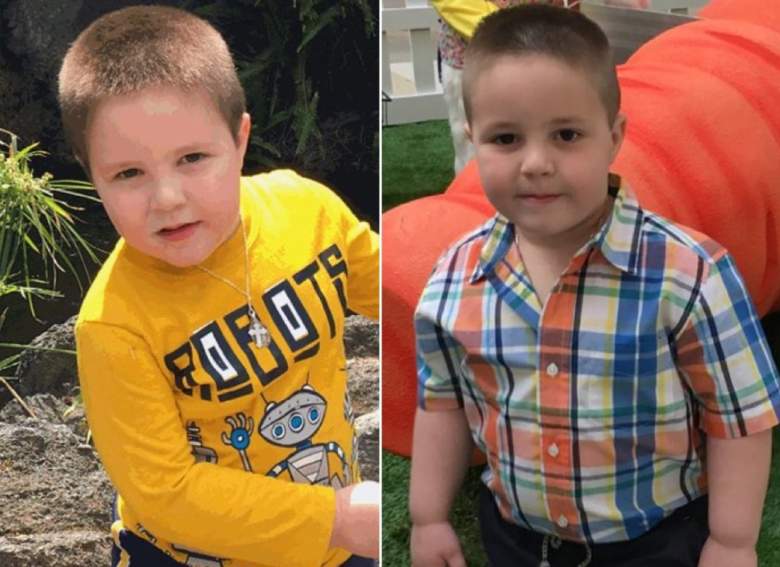 The little boy was last seen leaving the Disneyland theme park in Anaheim, California with his father.

The Los Angeles Sheriff’s Department says the child “was last seen on the night of Thursday, April 20, when he was captured on video leaving the Disneyland theme park with his father after midnight,” according to KTLA.

The boy has not been seen since.

According to the Los Angeles County Sheriff’s Department, before that video, the child “was last seen on Saturday, April 15, 2017 at 8:00 a.m. during a custody exchange with his father, Aramazd Andressian Sr, at the Baldwin Park Police Department.”

2. The Father Says He Woke Up in a Hospital After Being Found Unconscious by a ‘Good Samaritan’ & Speculates He Was Attacked

The story gets more twisted.

The father says that he woke up in the hospital after a Good Samaritan found him passed out in a park.

“In one moment, I was at the park with my son, and then I found myself waking up in Huntington Memorial Hospital hours later,” the dad wrote in a statement obtained by KTLA.

“I was told that a good Samaritan found me unconscious on the ground near my car, with young Aramazd nowhere in sight. I can only speculate that I must have been attacked in the park, given my unresponsive state and subsequent physical condition.”

ABC 7 reports that police have accused the father of having “selective memory” of what happened to his son. The television station reported that Aramazd Andressian “has ties in Armenia, but authorities said they did not have any indications that he’s attempted to go out to the country.”

3. The Father Was Initially Jailed in the Case but Was Released & Then Arrested Again

The father was arrested but then released with police opting not to forward a case against him to the District Attorney at this time.

The matter remains under investigation, the Sheriff’s Department reported. Police have referred to the father as a “suspect” in media statements.

Andressian’s lawyer has said that police had insufficient evidence against the father. The law firm for Andressian wrote on Facebook: “Unfortunately, the media has been fed and disseminated incomplete and misleading information pertaining to the disappearance of little Ara. Aramazd Andressian’s arraignment did not take place today. The case was dismissed pursuant to Penal Code section 849 (b) (1) (insufficient evidence). Mr. Andressian was released from custody earlier today.”

A woman wrote on the law firm’s Facebook page, “Arra Sr. is such a loving father. Always caring for Lil Arra and seeing after all his needs.”

However, on June 23, authorities arrested Andressian and formally accused him of murdering the boy. Andressian smiled widely at an extradition hearing in Las Vegas, according to ABC 7.

4. The Father Missed a Custody Exchange With the Boy’s Mother, Who Called Police

It was the child’s mother who first dialed police. According to the Los Angeles Times, the father and mother are getting divorced and share custody.

Lizarraga Law, APC, a law firm representing the father, released a statement on Facebook that said: “Some media outlets are reporting little Ara’s mother asked for a restraining order against our client. While this is true, a thorough review of the family law case file would reveal Ms. Estevez Andressian’s request for a restraining order was unfounded and denied.”

However, the Los Angeles Times reports: “Police later discovered that Andressian had been hospitalized earlier that morning when he was found alone and unconscious outside his car in South Pasadena’s Arroyo Park.” According to the newspaper, the South Pasadena police chief “said there’s no evidence suggesting the boy’s father was attacked, and investigators don’t know why he was unconscious.”

According to the Pasadena Star News, the father said in a statement on April 29, “My family and I are heartbroken and grief-stricken that Aramazd Jr. is missing and may be in harm’s way. I hope and pray for the safe return of my only child, my namesake, who has been missing since last Saturday morning (April 22).”

The father added that the “last time he saw his son was on Saturday morning at Arroyo Park. After breakfast, he said his son wanted to go to the park before the 9 a.m. custody exchange with the child’s mother,” reported the newspaper, which quoted Andressian as saying, “In one moment, I was at the park with my son, and then I found myself waking up in Huntington Memorial Hospital hours later.”

5. Police Have Searched the Father’s Home & a Lake to No Avail Looking for the Child

The Los Angeles County Sheriff’s Department has searched both the father’s home and a lake to find the missing child to no avail.

On April 28, 2017, “investigators served a search warrant at the residence of Aramazd Andressian Sr., 2000 block of Alpha Avenue, South Pasadena. Investigators are utilizing a ‘scent’ dog in search of evidence that may help locate missing 5-year-old Aramazd Andressian Jr.,” the Sheriff’s Department wrote in a statement.

The Department said a lake was also searched: “The search for the missing child, 5-year-old Aramazd Andressian, Jr, at El Dorado Point’s Lake Cachuma, has concluded for the day. Investigators thank the Santa Barbara Sheriff’s Office and Santa Barbara Park Rangers for their assistance during the search for witnesses and evidence. Investigators will continue to collaborate with these agencies as new leads develop.”

CBS Los Angeles reported that a woman told them “she is certain she saw a missing 5-year-old boy near a lake near Santa Barbara with his father.” She told the television station, “The little boy was watching my son play with his Marvel Avengers toys. She thought the father appeared to be crying and/or had been drinking. She said the boy was sitting in the front seat.”

Anyone with information about this incident is encouraged to contact the Los Angeles County Sheriff’s Homicide Bureau at (323) 890-5500. If you prefer to provide information anonymously, you may call “Crime Stoppers” by dialing (800) 222-TIPS (8477), the Sheriff’s Department reported.

Read More
5 Fast Facts, Breaking News, California, Los Angeles, Missing
Aramazd Andressian, a South Pasadena father, is in the news after his son went missing. He was jailed on suspicion of child abduction but released.