A 59-year-old Washington homeowner has been held on suspicion of murder after police say he fatally shot an intruder who broke into his home and took a shower.

Bruce Fanning told police he found the victim, Nathaniel Rosa, 31, taking a shower in an unoccupied residence on his Belfair property that Fanning uses for his business, the Mason County Sheriff’s Office said in a press release.

Fanning said he went to his main place of residence next door, got a gun, went back to his place of business and shot Rosa while he was still in the shower, the sheriff’s office said. Rosa was naked, did not make any threats toward Fanning and there was no physical confrontation prior to the shooting.

“All the information that we have indicates that the guy was undressed, in the shower, taking a shower, Lieutenant Travis Adams told the New York Times. Fanning told police he thought Rosa was drunk.

Rosa lived in Bothell, Washington, a city in the Seattle area about two hours northeast of Mason County. He was visitng his mother, who lives in the area, the Kitsap Sun reports.

1. Fanning Told Police He Shot Rosa 4 Times Without Saying Anything After Finding Him Still Showering

Bruce Fanning told police he went to his place of business, which is an unoccupied home on his property at 1520 East Trails Road in Belfair, Washington, Saturday morning after leaving his primary residence next door.

He said he “found forced entry, walked inside and found an individual showering in the bathroom,” the Mason County Sheriff’s Office said in a press release.

Fanning and the intruder, Nathaniel Rosa, “exchanged words” and Fanning said he thought Rosa was drunk.

According to court documents obtained by The Olympian, Fanning told detectives he told the intruder to leave, but the man replied with “non-understandable verbal threats.” Fanning said he was “afraid.”

“Fanning left the place of business and returned to his residence nearby,” where he retrieved a handgun, police said.

“He then returned to his place of business, found Rosa still showering, made no verbal comments, shot four times killing Rosa in the shower,” the sheriff’s office said. He shot Rosa through the shower curtain, the New York Times reports.

Fanning then called police, about 7:50 a.m., to report he had “just shot and killed an intruder.”

You can read the charging documents below:

Police said it is not clear how long Rosa was inside the home before he was confronted by Fanning. Investigators are not sure why Rosa was in the home, but said it might have been a mistake. There are four homes in a row in the area where the shooting occurred, KOMO-TV reports.

Police said the screen door had been kicked in.

The sheriff’s office said Fanning should have called 911 after finding Rosa in the shower.

Lots of reactions to the arrest. There is more to the story that can not be released yet. You may reserve your judgement until facts are out

“Certainly he had an opportunity to call law enforcement at that time,” Lieutenant Travis Adams told KOMO. “And we’ve contacted our local prosecutor, explained the circumstances to him, and he agrees that second-degree murder was an appropriate charge in this case.”

Fanning didn’t have an explanation for why he did not call 911 before shooting Rosa, poliec said.

An autopsy will be conducted by the Mason County Coroner to determine the cause and manner of Rosa’s death, along with toxicity reports.

The sheriff’s office said Fanning cooperated with the investigation.

2. Rosa Worked as a Paraeducator at an Elementary School & Didn’t Have a Criminal Record

Nathaniel Rosa worked as a one-on-one paraeducator with special needs students at Woodmoor Elementary School in the Northshore School District in Bothell, according to KOMO-TV. He started working at the school in 2015 and was a member of its leadership team.

“Nate was a compassionate and dedicated educator who made a difference in the lives of many and will be dearly missed,” Michelle Reid, the superintendent of the Northshore School District, said in a statement.

Rosa did not have a criminal record, according to KOMO.

He previously worked as an occupational community access aid at Work Opportunities in Lynwood, Washington, according to his Facebook page.

Rosa grew up in Mason County and still has family, including his mother, living in the area, according to his Facebook page.

“My dear Uncle Nathaniel Rosa no words can describe or say how it feels to learn what happened. You were the nicest person and the best uncle. I hope to see you one day again. Until then I love you and will miss you with my heart,” his niece, Mckaela Shane Rosa, said in a Facebook post.

A friend, Craig Jewell, wrote on Facebook, “I don’t think I ever heard you say one negative thing about anyone nor did I hear anyone say anything negative about you. You will be greatly missed.”

Tasha Nicole said on Facebook she was “completely shocked” to hear about Rosa’s death.

“Such a sweet soul with such a genuine smile,” she wrote. “Never in a million years would I have thought I would see your name in this type of headline. Definitely feeling the shoulda coulda wouldas tonight.”

3. Fanning Owns a Sporting Goods Store & His Only Criminal Conviction Was for a DUI in 2004

Fanning owns a sport good store called Target Zone Sports, which is based in Belfair, according to the Washington Secretary of State’s website.
According to the store’s website, BlowGunsWholesale.com, the company specializes in selling airsoft guns, blowguns, airguns and slingshots, including “extreme blowguns,” “paintball blowguns,” “dart blowguns” and “hunting blowguns.”

He has owned the company since 1989 and says it is “the last true 100 percent American made blowgun.”

Fanning’s only criminal record in Washington is a conviction for driving under the influence in 2004. He was sentenced to serve one day in jail, with 364 days suspended. He was arrested in Mason County. 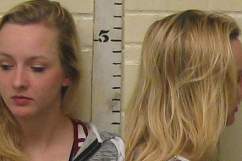 4. Police Say the ‘Facts, Statements & Evidence in This Case Do Not Support Necessary/Reasonable Self-Defense’

The shooting was not in self-defense, police said, because Fanning left the house. The sheriff’s office said the use of force by Fanning was not lawful.

“There’s no duty to retreat, but at this point, the owner did retreat. Then he came back and reintroduced himself to the situation and shot,” Chief Deputy Ryan Spurling told the New York Daily News. “Based on what he knew at the time and what he told us, it didn’t fit self-defense.”

The sheriff’s office included the following state law regarding use of force in its press release about the shooting:

The use, attempt, or offer to use force upon or toward the person of another is not unlawful in the following cases:

(1) Whenever necessarily used by a public officer in the performance of a legal duty, or a person assisting the officer and acting under the officer’s direction;

(2) Whenever necessarily used by a person arresting one who has committed a felony and delivering him or her to a public officer competent to receive him or her into custody;

(3) Whenever used by a party about to be injured, or by another lawfully aiding him or her, in preventing or attempting to prevent an offense against his or her person, or a malicious trespass, or other malicious interference with real or personal property lawfully in his or her possession, in case the force is not more than is necessary;

(4) Whenever reasonably used by a person to detain someone who enters or remains unlawfully in a building or on real property lawfully in the possession of such person, so long as such detention is reasonable in duration and manner to investigate the reason for the detained person’s presence on the premises, and so long as the premises in question did not reasonably appear to be intended to be open to members of the public;

(5) Whenever used by a carrier of passengers or the carrier’s authorized agent or servant, or other person assisting them at their request in expelling from a carriage, railway car, vessel, or other vehicle, a passenger who refuses to obey a lawful and reasonable regulation prescribed for the conduct of passengers, if such vehicle has first been stopped and the force used is not more than is necessary to expel the offender with reasonable regard to the offender’s personal safety;

(6) Whenever used by any person to prevent a mentally ill, mentally incompetent, or mentally disabled person from committing an act dangerous to any person, or in enforcing necessary restraint for the protection or restoration to health of the person, during such period only as is necessary to obtain legal authority for the restraint or custody of the person.

According to Washington’s version of the “Stand Your Ground” law, “no person in the state shall be placed in legal jeopardy of any kind whatsoever for protecting by any reasonable means necessary, himself or herself, his or her family, or his or her real or personal property.”

Todd Maybrown, a criminal defense lawyer in Washington, told the New York Times “it’s kind of the wild west out here, in a way.”

Maybrown told the Times that Washington’s law doesn’t impose a duty to retreat, but a person defending himself is barred from using “more force than necessary.”

In a statement, the Mason County Sheriff’s Office said it “found during the initial investigation that the facts, statements and evidence in this case do not support necessary / reasonable self-defense at this time.”

The sheriff’s office said the case has been referred to the Mason County Prosecutors, which will decide if formal charges are brought against Fanning.

Maybrown told the Times the Fanning case is an “odd scenario” and the “reasonable response” by the homeowner would have been to call the police after discovering the intruder.

Mason County Sheriff’s Office Lieutenant Travis Adams told the Times the case is “fairly unusual,” and there was no sign Fanning tried to call police before the shooting.

Bruce Fanning appeared in court for the first time on Monday for his arraignment. Superior Court Judge Toni Sheldon ordered Fanning be held on $250,000 bail.

Fanning has been in custody at the Mason County Jail since his arrest on Saturday.

Farstar told KOMO-TV, the situation is “unreal,” adding that her uncle is a private man who spends most of his time on his business.

“I would never (have) thought in a million years that we would be here,” Farstar said. “Just the wrong place at the wrong time. I know my uncle – he protects – so I know he wouldn’t have done anything unless he did feel threatened.”

“It’s just crazy,” Ellingson said. “It’s crazy to me that he didn’t call 911 when he left. I just wouldn’t expect that of him, he’s such a together guy.”

Loading more stories
wpDiscuz
1
0
Would love your thoughts, please comment.x
()
x
| Reply
Bruce Fanning, 59, has been charged with murder in the shooting of Nathaniel Rosa in Belfair, Washington. Police say Rosa broke into Fanning's home and was taking a shower.