The two U.S. service members killed fighting ISIS in Afghanistan in April 2017 were both decorated Army Rangers from the American heartland who were on their third deployments.

The Pentagon is investigating whether the men were killed by friendly fire, ABC News reports.

Both service members were killed while conducting combat operations against ISIS in Nangarhar Province, Afghanistan, in the area near where the U.S. recently dropped the “Mother of All Bombs” on the terrorist organization, the military reports.

1. Rodgers Was a U.S. Ranger Team Leader From Illinois & Was on His Third Deployment

Time and again, Rodgers gave in the service of his country. He was killed on his third deployment overseas, according to the U.S. military.

The military says that Rodgers was born on August 22, 1994 in Normal, Illinois.

“After graduating from high school, he enlisted in the U.S. Army from his hometown of Bloomington, Illinois, August 2013, and completed One Station Unit Training at Fort Benning, as an infantryman,” The Army press release says.

After graduating from the Basic Airborne Course, Rodgers “was assigned to the Ranger Assessment and Selection Program 1, also at Fort Benning. Rodgers graduated from RASP 1 and was then assigned to Company C, 3rd Bn., 75th Ranger Regiment where he served as a machine gunner, semi-automatic gunner, gun team leader and Ranger team leader.”

2. Thomas, Who Was From Ohio, Also Had Been Sent to Afghanistan Three Times

Like Rodgers, Thomas was on his third deployment to Afghanistan.

Thomas was born on August, 1993 in Colorado Springs, Colorado.” After graduating from high school, he enlisted in the U.S. Army from his hometown of Kettering, Ohio, in February 2012, and completed One Station Unit Training at Fort Benning, as an Infantryman,” reports the military.

After graduating from the Basic Airborne Course there, “he was assigned to the Ranger Assessment and Selection Program 1 also at Fort Benning. Thomas graduated from RASP 1 and was then assigned to Company D, 3rd Bn., 75th Ranger Regiment where he served as an automatic rifleman, grenadier, and an anti-armor specialist,” the Army said.

3. Friendly Fire Is Being Investigated & Both Service Members Had Received Many Awards

The Pentagon has ID'd Fairmont grad Cameron Thomas as one of 2 soldiers killed fighting ISIS in Afghanistan. pic.twitter.com/lQn70fo9TI

The Pentagon is investigating whether friendly fire led to the men’s deaths, according to ABC News.

“USFOR-A is investigating the possibility that the two Rangers were accidentally killed by friendly fire during the more than three-hour fight,” reads a statement from U.S. forces in Afghanistan obtained by ABC News. “We have informed both of their families of this possibility and we have appointed a team to investigate the Soldiers’ deaths. We investigate all combat deaths of U.S. service members, and because we believe that there is a possibility of friendly fire in this case, it is appropriate to notify the families.”

Both Thomas and Rodgers had received many awards in service to their country.

According to the Army, Rodgers’ “awards and decorations include the Ranger Tab, the Parachutist Badge and the Marksmanship Qualification Badge Expert-Rifle.”

Thomas was also much decorated.

4. Thomas & Rodgers Were Killed in a Raid Against ISIS Terrorists, Including Leader Abdul Hasib

In a photo purportedly released by the Islamic State, ISIS militants are shown patrolling the snow covered mountains of Nangarhar Province, Afghanistan. The photo was released on ISIS terrorist channels on January 23.

According to the U.S. military statement obtained by ABC, the raid was on an ISIS compound and involved two platoons of Army Rangers as well as Afghan Special Security forces. A helicopter dropped the soldiers into Mohmand Valley near the headquarters of Hasib.

Intense fire “from multiple directions” ensued, but the U.S. forces killed “several high-level ISIS-K leaders and upwards of 35 fighters.” The military says, “if confirmed, the death of the Emir and his associates will significantly degrade ISIS-K operationsin Afghanistan and help reach our goal of destroying them in 2017.”

According to Stripes.com, the two “died during a firefight with ISIS fighters in Nangarhar province, near the location where the United States dropped its most powerful non-nuclear bomb earlier this month for the first time in combat.”

A third service member was also wounded but is expected to survive, according to Stripes.

5. The U.S. Recently Dropped the ‘Mother of All Bombs’ on ISIS in Afghanistan

President Donald Trump has upped the ante and pressure on ISIS in Afghanistan, recently dropping what was dubbed the “Mother of All Bombs” on caves and hideaways used by the terrorist group.

The detonation happened at around 7 p.m. local time on April 13. The area where it exploded was in the Achin district of Nangarhar, close to the Pakistani boarder.

CNN, quoting Afghan officials, reported that 36 ISIS fighters have been killed. The network added that intelligence officials estimated that there could have been as many as 800 ISIS fighters in the area. No civilians were harmed in the attack. 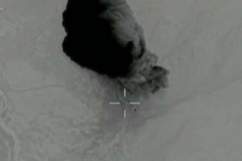